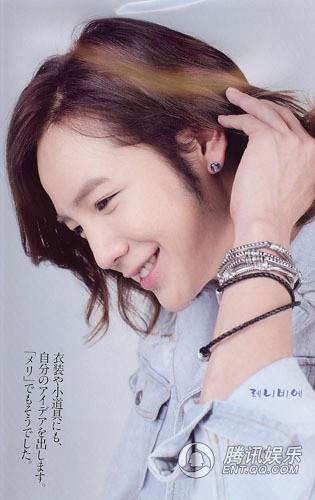 Tengxun Entertainment News – JKS is undisputedly the most popular Hallyu star in Japan today. Whenever he appears on the cover, the magazines are sold out; his first album topped the Oricon weekly chart upon its release. His latest drama “Marry Me, Mary(M3)” has just been broadcast on TBS, Japanese TV station. In April, the journalists from magazine “Hallyu STAR AERA Mook” flew to Seoul specially to interview the “little old man” (JKS’ nickname), JKS’ unique take on acting since he had started in showbiz at the age of 5.

While waiting for him at the interview room, we felt uneasy with a mixture of expectation and anxiety. At any rate, he’s a super star of the day. It was our first time meeting him. So no matter that we’ve heard a lot about him, we couldn’t help wondering what he’s really like. However, as soon as we saw his affable smile like a puppy as he entered the room, our worries disappeared. He’s as adorable as Mu-gyul and so cuddly even though he’s tall. Thanks for his sexy voice, JKS performs the role of “bossy” character such as Hwang Tae-kyung better. His exterior beauty takes down all of one’s defenses, and later as he relates his theory of acting in his deep baritone voice, it makes one feel deeply that pretty boys can be so in-depth too. Having played a character in M3 who lives his own life, JKS’ acting skills is also improving. He possesses the endearing child-like quality that makes people love him and virile charm of an actor.

To date, Kang Mu-gyul is the character most similar to JKS

Ikeman (dashing) actor captures the hearts of many female fans through acting in romantic idol dramas. After gaining steady popularity and becoming a star and then acting in other drama genres – this is the trend for Hallyu actors who become popular. Having been a child actor, JKS understands this reason, “I think romance can provide a beautiful fantasy for the audience.”

During the interview, JKS said frankly that the role of Kang Mu-gyul is, to date, the character most similar to his own personality in real life.

JKS’ thinking when it comes to script selection also appears to be different from other actors. He does not have the concept of particularly placing emphasis on the drama genre or theme. “I don’t select the genre intentionally. As for me, the genre isn’t so important. I’d rather select what I think I can perform well, but in case of Mu-gyul, M3, has a lot in common with me. In that sense, performing Mu-gyul has both an easy and a difficult side.”

I must make “JKS” vanish in the drama
After I finish acting, I will carry out self reflection.

Regardless of who one is, we tend to be attracted to his looks, but he also has built a reputation as a good actor since his career from a child star. As an actor, JKS often puts the idea of “I am an actor” in his consciousness. “Whenever I act, I must make “Jang Keun Suk” vanish completely (i.e. complete integration into the character).”

To turn into the character completely – this is the existence value of an actor. With this belief, JKS often takes note to hide the real him, “I am still trying hard to find a way to make myself invisible.” Specifically, when he takes the script, he will focus on it and complete reading it. “Before the camera rolls, I’ll familarize myself with the production objective and script, then internalizing the character is very important. After that, from the character’s daily habits and hobbies, completely transform myself into the character. For example, I wonder about the posture of the character when he drinks water, or which he picks up the spoon or chopsticks first when he eats, I’ll completely analyse such sequences.” This was the case for M3 too. Including his attire and little props, JKS would convey his ideas to the image consultant and then make a decision after discussion with the director. “It will appear more coordinated and smooth when all these important factors are combined.”

“A drama usually changes rapidly in the middle of the shooting. My own life and the time I can control become zero. Hence, sufficient preparation needs to be made beforehand. From the mid-way part of drama filming to the end, maintaining the character’s style becomes critical.” JKS reveals that when his drama is airing, he “would not watch, but would consider opinions from the people around him such as his manager and use it as a way of monitoring his acting performance. After that, I will do a self-reflection on my acting skill.”

After his drama ends its run on television, he will spend a few days, by himself, to watch the DVD repeatedly. “The person who understands Jang Keun Suk the most is still me. As I watch the DVD, I will inspect my own acting. Is it better to act this part in another way? Did JKS’ mannerisms and actions accidentally spill out? I will pen down these inadequacies as a record, and then in the next drama, remind myself not to make the same mistakes. To me, self reflection is to assess myself with a broad and relaxed mindset, to review my acting and from it, a chance to discover new points about acting. After filming ‘You are Beautiful’, I also cultivated another habit.”

After filming starts, I don’t look into the mirror and will rather spend more time on revising the script

The new habit that JKS is referring to is, after the filming starts, he will not look into the mirror. “Even if I’m having my make-up done in the car, I will not look at the mirror. Rather than using the time to check myself in the mirror, I would rather spend the time on reading the script.” The reason why he swears off mirror is “If I look at the mirror, my attention will be on trivial image issues such as how is my hairstyle now, will the result look good on screen. I would not be able to focus on moulding the character. My priority now should be on analysing the script and acting details such as how to improve my voice/tone, and not on my appearance.”

Once a vain “frivolous” guy, now more focused on cultivating self

JKS says honestly that in the past, he cared very much about how others looked at him. “But I understand that there are not only actors in this world, there are also many Ikeman and beautiful people. Rather than waste time and efforts on how to stand out in a crowd of beautiful people, I should be focusing on my actor identity and consider how to act better.” However, this does not mean that JKS will abandon efforts to enhance his looks. He laughs, “On my image, I will give the professional hairstylist and image consultant authority to do what they want, but if after that I find out that they make me look terrible, I’ll half kill them. Hahaha” 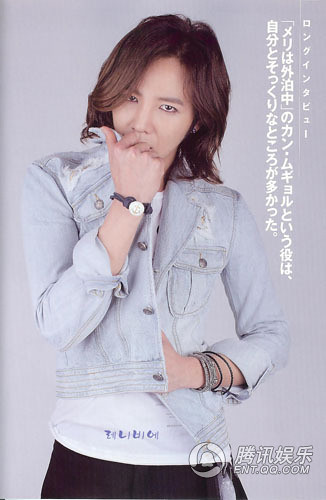 I want to be a super star on the acting scene, and also a child who never grows up

Just like that, in between jokes and laughter, JKS answered the journalist’s questions seriously. Counting the years since his childhood debut, JKS has been in showbiz for nearly 20 years – he’s really a veteran. The journalist concludes, “In fiercely competitive Korean showbiz where newcomers abound, can JKS persevere in his own style? During the interview, I saw JKS’ unhurried calmness. Perhaps this is the first and foremost requisite in the face of competition. In such a cruelly competitive world, how does JKS stand out?”

JKS said, “I still have to depend on the cultivation of my skill, and most importantly, how to maintain this competitive edge in the long run. What kind of clothes to wear, what kind of hairstyle, what kind of accessories … of course these are also things to consider, and perhaps also something not to be overlooked. But compared to this, the sense of presence that emanates from my inner self is more important. And this is not something that can be done by others. This is something that I have to create.”

On 27 April, JKS released his debut single “Let me cry” in Japan and realised his dream of being a singer, also setting the unprecedented record of a foreign singer’s debut single topping the Oricon weekly chart in its first week of release. Having acted a singer in many of his dramas, JKS’ entry into music scene has been much anticipated, but getting such good results is something that JKS did not expect. When asked how he balances his roles as an actor and singer, JKS laughs, “I often get asked this question and was thinking of how to avoid being asked this by you [laughs]. I think Mu-gyul in M3 is an excellent challenge to me. No matter how much I worry over it, there is only one answer.” JKS does not hide his ambition in the area of acting; he claims he wants to become the super star in the drama world. “Whether as an actor or singer, it is a way of expressing feelings; this is the prerogative of an artiste. Hence, rather than consider ‘should I select acting or singing to convey my feelings’, I want to focus on how to express my inner feelings and bring more moving, heartfelt (performances) to more people. I want to become this kind of artiste.” 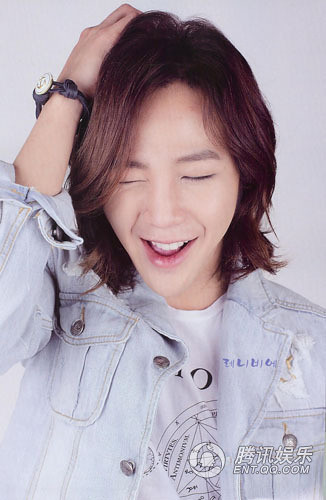 After some serious deliberation, JKS reveals his playful and humorous side. When asked what is the most important thing in his busy life, his answer made the journalist laugh and realise that actually, JKS is only a young man not yet 24 years old who has the same playful nature as his peers. JKS said that he loves cars. “No matter how old I am, I hope that cars will continue to be a cherished ‘toy’.” He said he bought a beige Porsche 2 years ago. “Until I become an old man, I don’t want to sell it.”

“Why?” The journalist asked in curiosity.

“Because I will maintain it well, and want to maintain this interest even as I grow older. I want to live happily with my car. As I get older, I will treat it as a symbol of my ‘success’, I want to become a dashing oh-ji-san (uncle).”

At a tender 23 years, JKS has already planned his life-ending ideal?!

“I want to bring the last script I read into my coffin. Rather than be a ‘star’, I want to become a ‘star actor’ (a super star amongst actors).” 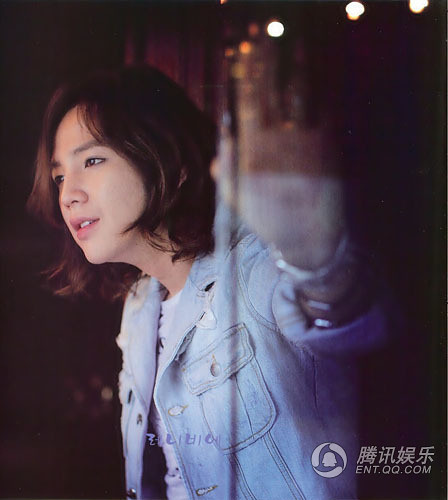