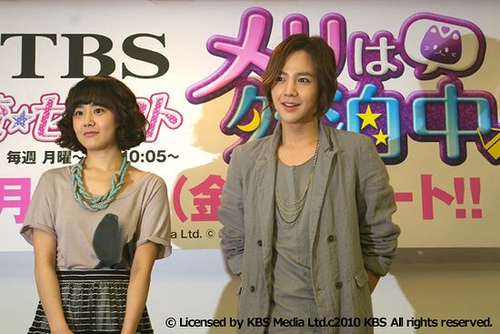 On 26 April, Jang Keun Suk and Moon Geun Young attended TBS’ commemorative press conference at a hotel in Seoul for the upcoming broadcast of “Marry me Mary” (M3) on Japan’s TBS TV station.

At the press conference, JKS used fluent Japanese to greet the media, and expressed his consolations to the disaster victims of the Eastern Japan big earthquake. “It is really regretful to have this sort of thing happening… praying that the disaster-hit areas can recover soon.”

When asked for his thoughts about M3 airing on TBS, JKS descibed it as “incredible” and said, “While playing the role of Mu-gyul, I have grown up together with him.”

MGY was asked what about JKS surprised her since this was their first time working together. She praised JKS, “He was similar to what I had thought. He is good-tempered and knows how to take care of others, but sometimes I feel that he is like a child much younger than me.” Upon hearing this, JKS made a face and said, “Do you think this way too?” The reporter asked JKS, who said, “I agree… … she is indeed more like obasan (more mature) than me.” Everyone laughed.

With M3 being reputed as Korea’s cutest love comedy, the romantic kissing scene between the leads was naturally one of the focus points of the media. JKS said, “I acted the other scenes without any reservations, but was a bit hesitant over the filming of the kiss. In all my acting thus far, this is the deepest kiss I’ve had to do, so I did communicate with MGY before the scene.”

With his usual humour, JKS added, “(This is so awkward) because I have never had any kissing experience with girls before.” Despite knowing it was a joke, the group of female reporters were all kept happy.

Recalling the amusing incidents that happened during filming, JKS looked serious. “The filming process was quite tiring and at times, tough and hard to endure. I had to work hard to memorize lines. Geun Young’s outstanding performance helped me to integrate into my character.” He also said that it was with mutual support and encouragement that the drama filming was successfully completed.

6 May is MGY’s 24th birthday. The organisers especially prepared a cake for JKS and MGY to celebrate her birthday in advance, and everyone sang the birthday song. Not knowing about this beforehand, MGY was touched amidst the heart-warming atmosphere.

M3 is scheduled to be broadcast on TBS on 20 May, and the DVD Box will be on sale in Japan from 3 June. 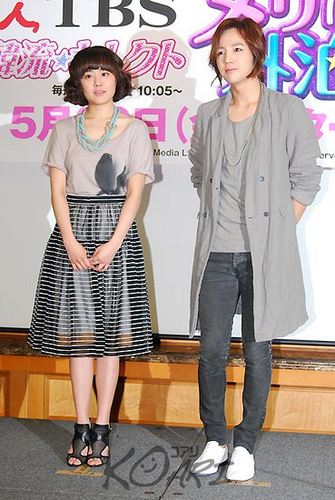 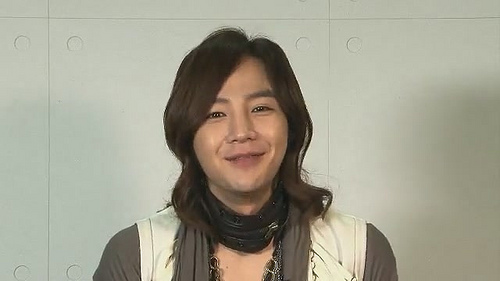