27 May is a very eventful day of ups and downs, disappointment and blissful happiness. Ferlyn and I reached Siam Discovery Centre at 1 pm, and after scouting out various possible positions on level 1, 2 and 3, we decided to take up position on level 1 directly on one side of the stage, thinking that we’ll get to see JKS most clearly from there. We waited for hours there. I was having some stomach pain due to a very hurried lunch but I did not even want to move away from my precious position.

Then the worst thing we dreaded happened. At 4 pm, the security came and shooed us away, explaining (I think) that fans cannot wait at that area but must wait inside the allocated barricaded area. I must admit that Security did a great job to direct traffic and maintain orderliness, but the roaming numbers of Security staff diligently doing their job meant that we lost our best viewing position. 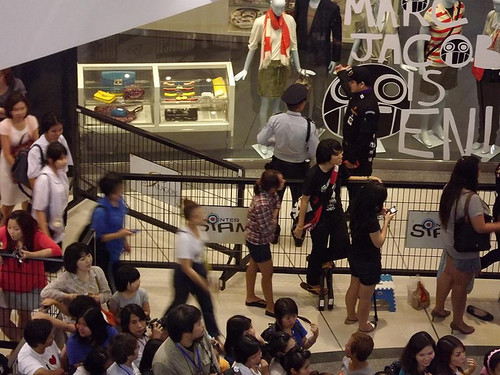 As a result, we had to circle around the 3 levels again to look for another position. Unfortunately, by that time, the crowd of fans had swelled and it was impossible for us to even find a place with a clear view. Ferlyn and I went to the stage-left area allocated for fans (centre was a section of seats reserved for the VIPs and media), but we were at the back and our view of the stage was quite obstructed, especially if people in front of us later lifted their cameras up high. But we were resigned to our position.

Then after a few minutes, I noticed that the girl in front of me had a collapsible stool at her foot. She intended to stand on it later to get a clear view for photo-taking. If she really did that, I wouldn’t even have any hope of seeing JKS. Ferlyn and I felt really down – after hours of waiting, we lost our good position and even had to face the dire possibility that we wouldn’t even get a clear view of JKS.

At that point, I split ways with Ferlyn. She stayed on the ground floor while I desperately circled level 2 and 3 again. It was only 30 minutes to the start of the event. Now, Siam Discovery Centre may look nice with those tall pillars and long hanging banners from the ceiling, but what it means is that the view from many positions at the railings was severely blocked and limited. (see pic below) 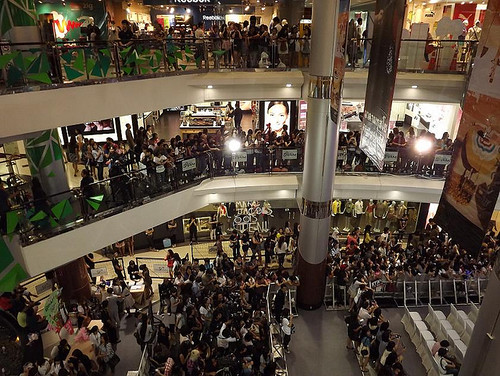 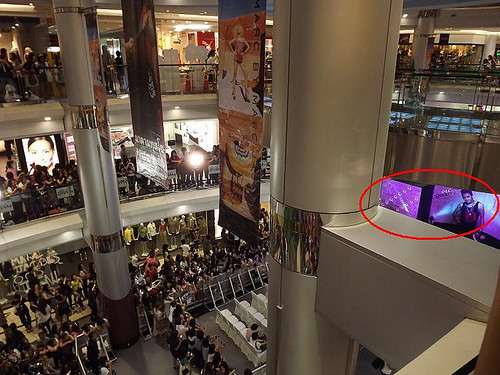 After a few futile attempts hovering behind those lining the railings and always looking for any minute space to squeeze myself in, I noticed some Thai (?) eels on one side of the level 3 railing with a bit of space in between them, and I asked them whether there was anyone standing at the space and if I could squeeze myself in. They made some space for me, for which I am eternally grateful because that completely transformed my day from a rotten day of futile waiting and disappointment to one of extreme happiness.

From between the pillar and building structure, I could see the centre of the stage, (pls see pic above, the part circled in red is the stage that I could see from my position on level 3). Owing to the effective zoom-in function of my camera, I think I got pretty clear videos. Looking at the stage with my eyes, I could not even see JKS’ face clearly, but when I zoomed in with my camera, please see the video for yourself. I took many, many videos of the event.

As at the time of writing this, it is 1 am and Four Seasons Hotel charges 235 baht for one hour of internet, which is the reason why I’m at MacDonalds 10 minutes away uploading video at the speed of 1 video for 1 hour. So I can only upload two at this point. I have only slept 2.5 hours before my flight on Friday and I do need to catch up on my sleep after this so that I can enjoy the Cri Show on Saturday. In due course back in Singapore, I will upload all videos I have if possible to my Youtube sniffiv account.

Event summary as below (in order of what I can recall and not in chronological sequence). The event started late at about 20 or 20 minutes past 5 pm. The first video above shows the start of the event, with JKS on stage smiling and waving at everyone. The emcee did a brief interview with him, followed by various people coming on stage to take photos with JKS (am guessing they are sponsors or VIPs etc). Then JKS was given a box of Ole candy which he threw happily to the audience and even to fans on the second level. Then JKS went backstage and after a break of about 15 to 20 minutes, the autograph session started. JKS was his usual sweet self and was signing posters for each fan.

Then came one fan from China (in video below, please note 3rd fan with white ribbon on her hair). She mentioned on Sina that she had prepared a nice photo album containing a selection of photos from each Asia Tour country that she has followed JKS to, and she would request JKS to sign on her photo album instead of on the given poster.

After understanding her request, JKS started to sign on her photo album. The rather fierce security staff standing behind JKS told the fan that JKS could only sign on the poster, and actually snatched the photo album away. JKS looked at the security staff, as if in a what-are-you-doing / she-is-my-fan / I-sign-where-I-want-to-sign look, drew the photo album back to himself and continued to complete his signing. When the eels present saw what JKS did, my goodness, their combined screams were loud enough to lift the ceiling – we were all applauding JKS for his action – he’s such a sweet, considerate and accommodating star, and the best thing is, he genuinely cares about eels’ welfare rather than stupid, silly guidelines set by event organisers.

This means, of course, that it opened the floodgate for such requests for JKS to sign on other items, and a couple of fans even got JKS to sign on their T-shirt! After more of such requests, the emcee fell back on appealing to fans not to present other items for autograph but to accept the designated poster.

The photo-taking session also went smoothly. One really has to credit the Thai organisers for learning from the experiences of other countries. They provided tiers of steps so that each person can be clearly seen in the photo and did not need to ask people in the first row to kneel down on the ground, which happened to me and my knees hurt so much from the kneeling.

The autograph venue also had an Ole booth at the back, where they were doing a brisk business selling Ole candy in heart-shaped metal containers with 3 different designs of JKS printed on the container. Business was so good with so many eels snapping up the candy that by the end of the event, they had almost sold out all the candy. This is testament to JKS’ popularity! 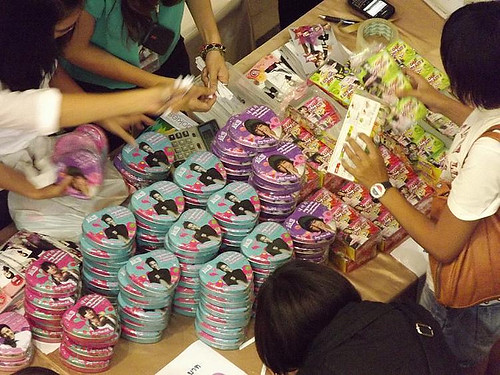 What you see below is what Ferlyn has bought at the bequests of her friends. I bought some, but not as many as her! 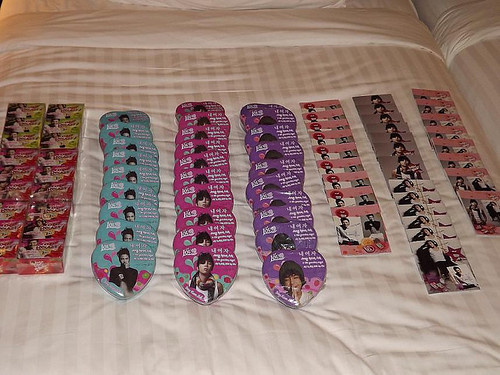 From a day that promised to end in depressing disappointment without even catching a clear glimpse of JKS, to a day of extreme blissful happiness where I saw JKS clearly with the help of my zoom-in camera, to buying the JKS Ole candy heart-shaped containers that I desired, really, every minute and every second spent looking at JKS is a moment of happiness.

There are really many more videos that cannot be uploaded right now, but I will do so gradually when I’m back in Singapore. Bangkok Cri Show in Saturday 28 May will be another fantastic event with JKS. I heard from a Thai fan that security checks on cameras will be stringent. I’m not prepared to risk my camera, but Ferlyn will be able to smuggle in her slimmer camera in her pocket (please don’t tip the security to start checking pockets, ok) and we’ll try our best to see if videos can be taken ^^ 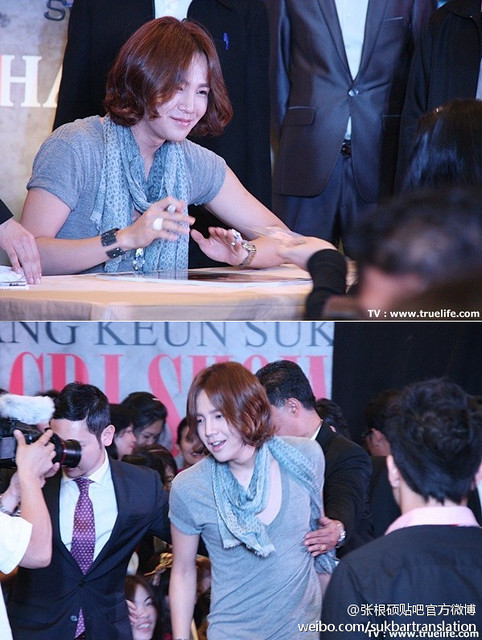 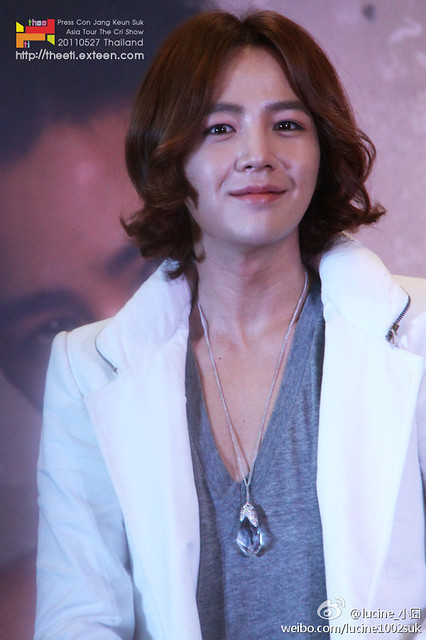 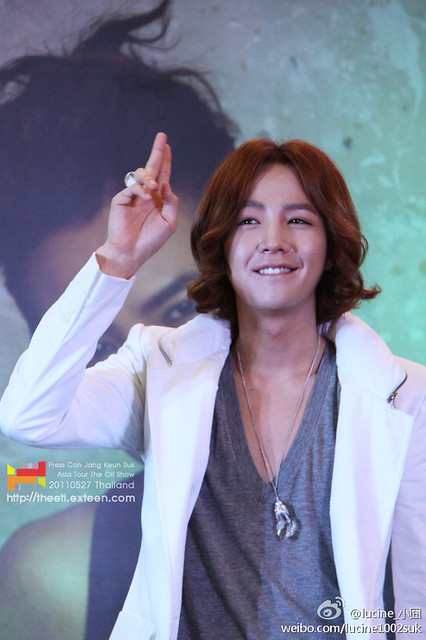 Customary hug to last fan in the autograph queue – JKS hugged her so tightly and even put his hand on her hair!
* all other eels faint from envy * 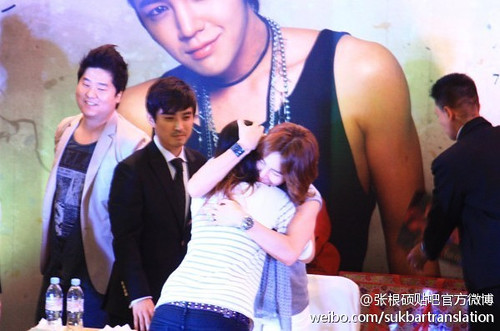 That’s all for today. Good night, everyone!