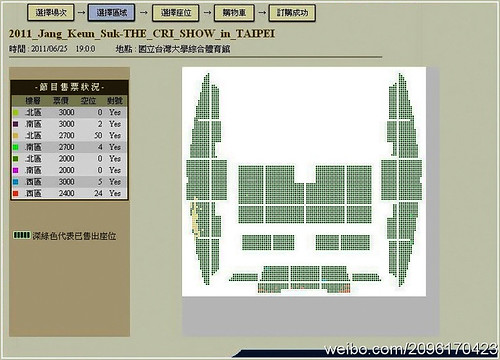 Taipei Cri Show’s official ticket purchase starts from 21 May 2011 at 12 noon (Taipei time), and within 45 minutes, almost all tickets were sold out! In comparison, JKS’ fan-meeting in Taipei last year had its tickets sold out within 24 hours.

As expected, the same ticketing website that hanged last year hanged this year too. A handful of fans were able to purchase tickets via the website, but the majority of fans could not and faced multiple issues such as page not able to load, service not available etc. Two big issues that surfaced are that when fans selected the seats online and proceeded to payment page, they were not able to complete the transaction because although they had selected the seats already, the ticketing system does not hold these seats as “reserved” and other people especially those at the physical counter, could buy away these tickets. The other issue is that reportedly, the ticketing website company is using an old ticketing system based on Windows 98, and hanging is a common problem online as well as at the physical counter.

Taiwanese organisers Joytime Entertainment’s Facebook page is awash with many criticisms and unhappy comments from eels, especially in relation to their unfairness in allocating 3 entire rows of the highest-priced NT$4,500 section as publicity seats which is a norm on the concert scene. These publicity tickets may be given away to the mass media, but some tickets have emerged on online auction sites selling at ridiculously high black-market prices. 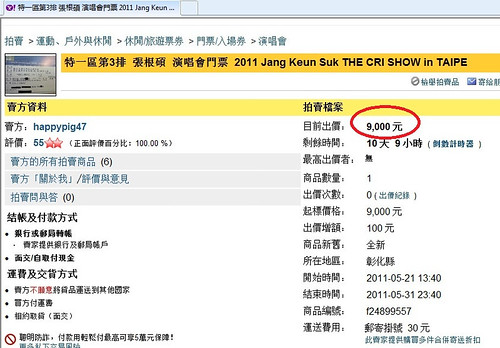 Even before official ticket sales started at noon today, at 7 am in the morning, a seller already published an auction on Taiwan Yahoo website selling NT$4,500 ticket for NT$9,000 – tickets with a specific row and seat number. Many Taiwanese eels are extremely angry with Joytime Entertainment for releasing tickets to non-fans before the official selling time, and thereby being the indirect cause of the black-market tickets which are on the rise.

As of the time of this post, Joytime Entertainment has not made any response.

32 thoughts on “Taipei Cri Show tickets sold out in 45 minutes!”