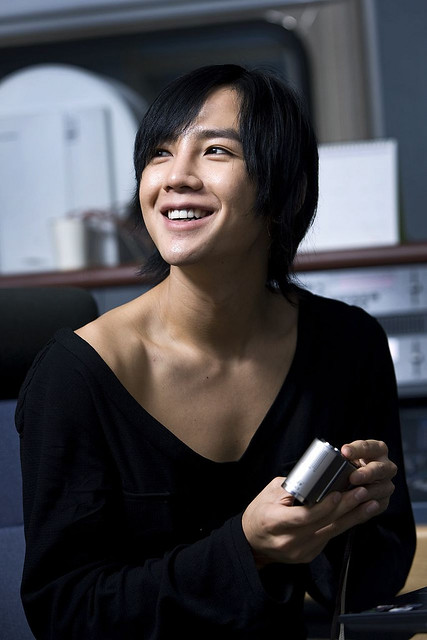 >> Knew about privacy-invading fans through Twitter not long ago

JKS: My life is my own. Why do I have to let people see? I am already presenting a lot of myself on television, I’m not a reclusive actor. Finding out where my house is, who I am meeting and actions such as these, either the person is sick or has too much possessive desire.

>> The higher popularity is, the more private life is lacking.

JKS: I don’t want to wear a mask in my actions, so I use twitter for easy communication. I’m a publicly acknowledged artiste, but I only want to be an artiste, that kind of artiste who can walk on the street and buy some new year’s cake to eat. However, even if I’m merely expressing my own opinion, people don’t like it. When I’m criticizing others, I would have reflected on myself first, I don’t act without thinking, I know what I’m doing.

>> You became Keun-sama after Yong-sama, why are you so popular in Japan?

JKS: It should be Keun-chan. My age now is not enough to be addressed as ‘sama’. I don’t know why I’m popular, maybe it’s because never before has there been such expressive love. In Japan after saying (tantalizing) words “I like girls who look good in miniskirt”, fans turned up the next day at the concert wearing miniskirt. If I said this in Korea, I would be severely criticized. This is not communication, right? If I do blindly what others want me to do, what is the difference (between me) and the cans coming out from the vending machine?

>> Have you confirmed your next movie?

JKS: No matter how good the script is, I won’t be satisfied. In the past 1.5 year, I didn’t even have 3 rest days in a month, otherwise why would I give my managers a 20% salary increase? I want to rest now.

>> What do you want to do during your rest?

JKS: I want to travel. I want to go for a stroll in villages I have not been to before. Moon Geun-young is now in New York, ah I’m so envious of her, living a life in an unhurried and strong manner.

>> How did you feel when you were criticized by netizens as “ho-sei (pretentious) Keun-suk”?

JKS: At that time, I didn’t understand why they attacked me. I was very surprised and felt wronged. With the passing of time and now that I look back, anyone would have felt I was pretentious. Maybe I just wanted to shake off the sense of inferiority from my child actor background and pretended to be great, pretended to be dashing, pretended to be strong.

>> As a Hallyu star, you should have earned a lot, right.

JKS: I don’t know how much money entered my bank account. After news reports stated that I earned 400 billion yen in Japan, I received a lot of collaborative proposals. I feel that I am gradually losing some people and becoming lonely. For movies, if we don’t talk about the script but talk about investment first, I don’t like it. So I want to work with director, and simply film a low-budget movie.

>> Don’t you have the ambition to win an award?

JKS. Yes. Before this JKS passes away, I want to get an Oscar award.

55 thoughts on “[Interview] Before this JKS passes away, I want to get an Oscar”