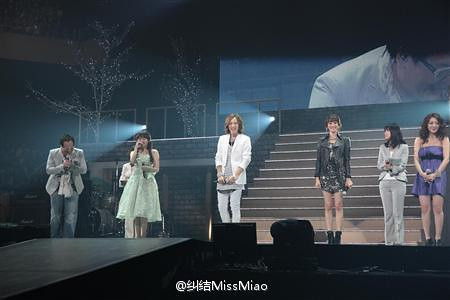 It was my second time to see Sukkie in person and first time to listen to his singing live.

As you know, it’s not his show (I mean his cri-show), but M3 (Marry me Mary) Fan Meeting. So before the show I was a little afraid if we could enjoy the event fully because most of the participants must be Sukkie’s eels and we were looking forward to attending his own show which was canceled previously because of the earthquake, but we weren’t able to listen to his original songs this time… But as soon as the event begun, I found that was a completely pointless concern. We all enjoyed the event fully from the beginning till the end. Sukkie gave us a special performance to entertain us at the encore time.

Oops, I skipped a lot -_-;
I’ll show you the details from the beginning.

The event begun with a wedding ceremony performed by Japanese performers. But we misunderstood that the couple were Mary and Mu-Gyul. So when we found them, we gave a shout of joy! But later we found they weren’t, which made us disappointed badly. We were dying to see them instantly. “No more other performance! Come and see you soon, Sukkie!!”, we muttered to ourselves…

A several minutes later, we finally meet the cast! They introduced themselves one by one. And the video-taped message from Kim Jae-Wook was introduced. He couldn’t come because he was now in the army… 🙁 Sukkie gave us a talk in Japanese and surprisingly he used Japanese in most of his communication with us. We were so touched… Sukkie said proudly and jokingly, “I’m a genius!”

After the introduction, the cast signed the contract that they promised us to succeed the event. This direction is suitable with M3 event, right^^ ? And then, the event begun fully.

It was the live by Mu-Gyul that was performed for starters. As I mentioned above, it was completely my first time to listen to his song live. Honestly I couldn’t shout for joy… I felt like I was dreaming and gazed at his breathtaking performance. He sung “Take care, my bus!” and “Hello Hello” then.

After the short live, all the cast appeared on the stage and the question time to them began. I mentioned some impressive answers by Sukkie.

Q1) Do you have anything which you want other casts to stop their bad habits?
A1) A Sudden kiss by Mu-Gyul’s mother.
—>Sukkie revealed that Lee A-Hyeon (Mu-Gyul’s mother) often kissed him though the kissing scene wasn’t written on the script. But he complimented that he felt it was not bad by a mother’s kissing.

After that, the quiz time about M3 began. The question was too difficult for Sukkie including most of the cast to answer. At that time, I was so surprised to hear his answer and reason about it. Because we made the same mistakes and the reason why we chose it was also completely same! I’m fool enough to think that we have a lot in common (one example is my blog ID, tenshi_akuma^^). So this time I found our way of thinking was quite similar! I was happy even if I made mistakes about the quiz. LOL…

Q3) How many candles ware put on the cake for celebrating divorce ceremony?
A3) 2. [right answer:5]
—>Sukkie didn’t remember the number, but he imagined that 2 implied a lot. The couple consists of two people. At first they are others, but then they become a couple, family. And when the couple break up, they become strangers again. So Sukkie thought this ceremony was “2 to 1, 1 to 2”. So he answered 2. I thought completely same!

Q4) Which destination was the air ticket given Mu-Gyul by Mary’s father for?
A4) America. [right answer: Narita(Japan)]
—>Sukkie didn’t remember the destination, but he imagined that Mary’s father wanted Mu-Gyul to keep away form Mary.
So the destination must be far from Korea. And America was commonly used in Korean drama. So he answered America. This was also completely same as my answer!

After the cult quiz about M3, he was ashamed of not remembering the drama at all. He added that it would also happen to YAB. Because he shot YAB quite long ago, so he admitted that it was impossible for him to remember the details. (He always looks forward and doesn’t want to live on his past accomplishment, right^^ ?)

During the event, other casts also sang songs. Their performances were quite enjoyable. Especially, Park Sang-Myeon (Mary’s father) entertained us a lot. And some scenes were reproduced well.

About Sukkie’s performance, he sang “I Will Promise You” and “My Precious” at the late event. He thanked us to support him continuously and he promised that he would protect eels at any cost. He wanted to promise us not to cheat on him. Sukkie was so touched that there were 10,500 people at the hall. He suggested taking a picture with him in memory of today’s show. Then he took some pictures with his iPhone. But all the pictures were covered with only Sukkie’s face because he took them by himself…-_- Then he suggested taking vids of the audience. We gave a glad cry following his cue. He said that these were for his old friends who still didn’t believe his popularity in Japan. Then he revealed a plan of his arena tour. He was planning to use wires to approach the audience sitting at some distance from the stage. The capacity of his arena tour in October was bigger than today, so we can feel him closer with the useful tool.

I will show you other topics I remembered at random.

2) Sukkie thought given love should be given back again. So he was planning to go to the disaster area in Japan as a volunteer activity. Because he knew many eels lived there.

3) He was surprised to know that Japanese people didn’t say “I love you” generally. Even stars didn’t say it to fans. They just say “Thank you for supporting me”. Sukkie thought to say directly was important. After his saying, many eels shouted “I love you, Sukkie!!!” He laughed a lot.

4) One luckiest eel was given his kiss on her hand.

At encore, he showed us a shuffle dance putting on “ドエス(S)T-shirt”. ドS means “ultimate sadist”. The T-shirt must be given by Japanese eels. We love his bossy character and we are obedient to him! LOL. Anyway, we didn’t expect to see his shuffle dance this time, but after the music and dance stared, M3 Fan Meeting changed totally to Sukkie’s world. I felt so happy that everything seemed like a dream. We all attendees became more Mero-Mero to him!!! 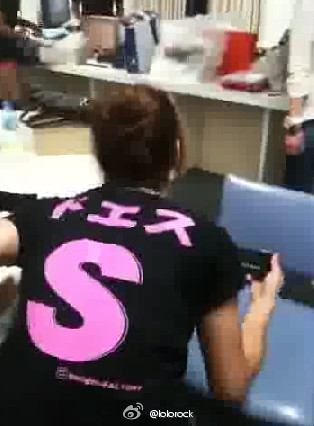