Korean star Jang Keun Suk released his debut single “Let me cry” in Japan on 27 April this year, which topped the Oricon weekly chart upon its release, and JKS became the first foreign singer to set this record. These results led the chief editor of Japan’s most reputed entertainment magazine “Oricon Style” to proclaim that “JKS’ era has arrived”. Public TV stations including Fuji, TBS and Japan TV subsequently produced special TV Feature to introduce the phenomenon of the JKS craze sweeping over Japan and also to track his latest updates. In addition to publications and magazines, the makkori that JKS endorses also rode on the tide of popularity and its sales volume soared. JKS’ first official merchandise shop in Shibuya has also attracted fans from many countries. Today, the Korean media also sees JKS in a new light and compliments JKS for his rapid growth. In commemoration of its 26th anniversary, “Sports Seoul” especially invited JKS to do an unprecedentedly long interview and does a complete analysis of the charm of this new Hallyu leading character. Below are the main contents of the interview.

Singing is just for fun? Acting is my life-long profession

S: Please introduce the production concept behind your “2011 JKS The Cri Show” Asia Tour which has gained overwhelming response in various countries.

J: “Cri” is the short form for “Critical”, a common jargon often used by netizens which means the last, decisive fatal blow. In my Asia Tour, it means “lethal charm”, used for the first time in April last year. This year, the performance duration has been extended from 2 hours to 2.5 hours. The opening song is “Let me cry”. Besides singing songs, specially prepared videos from YAB and M3 will be played, together with talk segments etc. We’ll also present DJ-style “Gotta getcha” targeted at the Chinese audience, and play water gun games with fans. I’ll have at least 10 changes of clothes throughout the performance.

S: On top of the excellent performance concept, for JKS to become so popular, you surely have your secret?

J: Mm, the secret to popularity? [lapses into brief, puzzled comtemplation] That is I often “transit” (i.e. during travel). In the process of travelling between various Asian countries, I often think about how many actors often talk about their work as a focus topic during interviews, I think this is rather conservative. My style may be quite different from other Hallyu stars. And I’ve always wanted to try many new challenges since I was a child. During my promotional events in Japan and China etc, when I chat with reporters, many times I choose a playful (humorous) way of doing the interview (to make the atmosphere less rigid).

S: Why do you say your secret is “transit”?

J: Haha, that is because when I ask my fans why they like me, many of them say that they look forward to seeing me being happy in trying various new challenges. No matter what silly and adventurous thing I do, they will always be by my side to support me and look forward to the surprises I’ll bring them.

S: How do you interact with fans?

J: “JKS application” was set up since April last year. This is one way of communicating with my fans when I’m busy during the Asia Tour. Then, every month, I’ll put on my official website more than 10 posts in four different languages (Korean, Japanese, Chinese and English). But there is a limit to online interaction. The best way to understand each other’s sincerity is when people look into each other’s eyes during face-to-face meeting, and my Cri Show is produced based on this concept.

S: You have been given the label of being the “second Bae Yong-jun”.

J: I feel honoured. Yong-yang is the propelling force behind Hallyu being a social phenomenon. Bae Yong-jun senior has opened up the Hallyu path for us. I recall my first fan-meeting in Japan; the venue which could accommodate 2,000 audience was only filled partially. In the 4 years since then, this autumn I will be holding my Arena Tour in Nagoya, Osaka and Saitama. Every time, I will do my best to prepare for the performance, hence in this way accumulating popularity gradually. Even so, I still think that my success is largely due to good luck. Now and in future, I still want to be a free Jang Keun Suk, trying my best to discover unknown potential. Singing is just a part of my acting activity; I don’t have plans to focus only on singing.

S: What do you see as the propelling force behind the new Hallyu era?

J: In the entire Asia entertainment scene, Hallyu accounts for a large proportion. This originates from the fact that Koreans are producing excellent works, which is the basis for the Hallyu wave in Asia. Based on the overwhelming response in countries such as Japan and China to “You are Beautiful”, I have further consolidated and broadened my fan base.

S: You’ve been a child actor. What was the fateful incident that brought you into showbiz?

J: I started acting at 8 years old, but frankly speaking, I don’t remember what kind of drama that was. After that, I became a commercial model. I started to model at 4 years old, so next year is my 20th anniversary. I should prepare a dinner show, haha. I heard from my mother that when she was expecting me, she had a strange dream of a tiger with a mountain fruit in its jaws, fruit having a meaning of “talent”. Once, my mother brought me to visit an old actor, and he said “Let this child learn to perform”. I also heard that my mother’s grandfather was an actor too.

S: In your dramas to date, there are many singer roles. What is your criterion for selecting drama?

J: I don’t intentionally demand myself to undergo a complete transformation in every drama. I just try not to be stuck in one specific type of image. I don’t like to be restricted to one type. It’s not that I have a particular preference for singer roles, just that I received more scripts with singer role. In fact, in the early stage of “You’re my Pet” (YMP) filming, I was quite lost as to how to act it well. At the meeting, sister Ha-neul gave me a suggestion. She said, “The way you look now is already very similar to the character. You don’t have to intentionally hide your own characteristic, just act naturally.” I am very moved by these words; the advice is also very appropriate to be applied to my life in future. Instead of intentionally emphasizing that I should work hard as an actor, I should follow the natural course. My ambition of being an actor came about when I was 19 years old. In the past 5 years, I only acted in 4 dramas. Until today, I have not been attending school like normal people of my age, having only focused on my showbiz work. I don’t regret choosing this path. I am very grateful that many people know me through my works.

S: Speaking of your acting theory, do you have principles that you must abide by when you act?

J: I’m a sadist and often mistreat myself. If I become fatter, I will scold myself, “Why did I become so lazy?!”, then I will immediately start a gruelling diet and eat very little for breakfast and lunch, and mainly chicken breast-meat for dinner. To me, it’s not tough at all. I don’t have principles that I must definitely adhere to. To me, to battle with an unseen “JKS” in my heart is a happy and interesting thing.

S: Looks like you’re a forward-looking person who always keeps running on, and don’t easily give yourself a break to rest?

J: That’s right. I belong to the sadist category. I feel that if I continue like this, my interpersonal relations will slowly become restricted. I think once I’m past 30 years old, this sense of loneliness will become even stronger. Occasionally, I think about who will attend my wedding ceremony (i.e. very few people), it’s quite horrifying.

J: I look like this, haha. In YMP, I act as a classical ballet dancer, so I’ve already lost 5 kg, now I’m only 66 kg. I don’t particularly like muscle, I think that a leaner figure is better. I won’t intentionally go and do weight training.

Wants to invite Kim Hyun-joong, Lee Min-ho and Lee Seung-gi out for drinks

S: Who in showbiz would you like to become good friends with?

J: I want to invite artistes who are around the same age as me. Mm, to go for drinks at night with Lee Min-ho, Kim Hyun-joong and Lee Seung-gi behind the back of our agents seems to be a good idea.

J: Car, wine, music, camera and electronic products etc. Money, drinking capacity? I’m not very clear. I have slight insomnia. Before I down 5 bottles of so-ju (wine), I drink beansprout soup first to relieve the after-effects of drinking, then the next morning when I wake up, I won’t experience the after-effects.

J: Money, computer and chocolate. I have a love-hate feeling towards money. Eating chocolate will make people become lazy, so I don’t like chocolate. (JKS’ manager added that fans almost never give chocolates as present. Even if they give, it is dark chocolate.)

J: A girl who is very innocent with a well-mannered air. It’s been a very long time since since my last relationship.

S: What are the inconveniences of being a star?

J: Naturally, there are (inconveniences). But I try my best not to limit my activities just because of my “star identity”. I’ve gone to school wearing a cap and taking the subway. I can go and get my hair cut without the company of my manager. I minimize the scope of asking people for help. If possible, my principle is to do everything by myself. I love the dumplings at Myeong-dong, so I occasionally go to the restaurant to eat at 9.30 pm, 15 minutes before closing time, because basically there won’t be any customers there at that time.

S: Did you watch MBC’s “Greatest Love”? What is the most recent movie you’ve watched?

J: Heard that the orphan’s role is senior Cha Seung-won’s distinctive performance. Acting in a comedy is not my strength, I’m envious that he can act so well. The last movie I watched in a cinema is last year’s “I saw the Devil”, and yes, I watched “Black Swan” on the plane, I should have watched it in a cinema.

S: How do you handle university life and academic score?

J: University life is like a mini-society, and much life experience can be gained. I want to attend every lesson and complete my homework, but often I cannot do so. I can only depend on my interpersonal connections [laughs]. If I suddenly put in a “shining” performance just before the exams, it’ll achieve the opposite effect. Actually, there are still ways to fare well in the exams. In the first month when lessons start, I will ask the professor various questions (to figure out his style of thinking/teaching). Of course, I will sit for exams, and will join the weekend gatherings every week without fail. 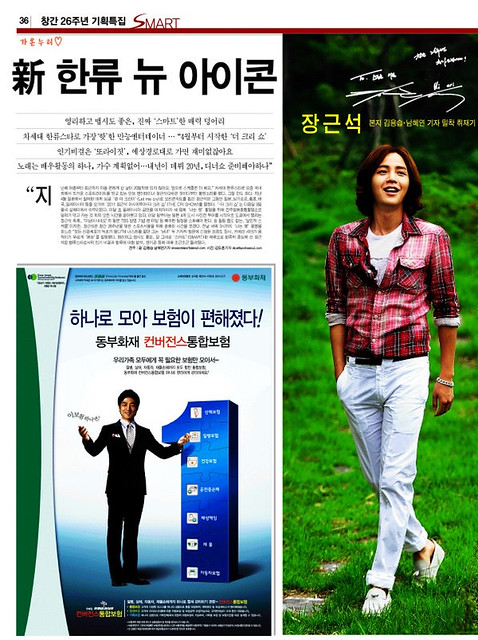 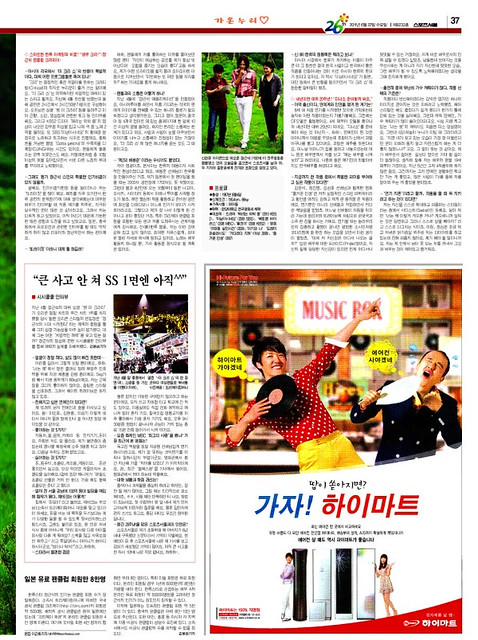