Aphrael77’s note:
I just read KeunSukChina’s translation which includes the prelude and part of the interview not described in Tengxun article. Also, there are some minor differences between these two sources, but there is not much impact on the overall meaning. 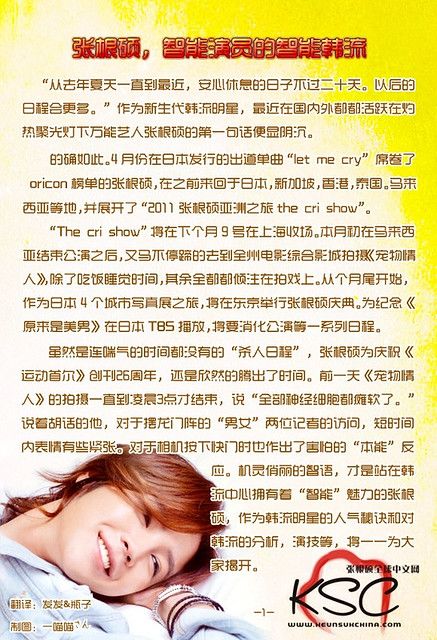 Jang Keun Suk – An actor with intelligence and capability

“From summer last year until recently, I only rested for 20 days. My future schedule will be even more packed.” As a new-generation Hallyu star, the first sentence out of multi-talented artiste Jang Keun Suk who has been active locally and overseas under the focus of the limelight sounds gloomy.

Since April when the release of his debut single “Let me cry” shot up the Oricon chart, JKS has been travelling between Japan and Singapore, Thailand, Hong Kong and Malaysia having his “2011 JKS The Cri Show” Asia Tour.

“The Cri Show” wraps up on 9 July in Shanghai. After finishing the Malaysia performance in early June, he has gone immediately to Jeonju movie city to film “You’re my Pet”. Besides eating and sleeping, all his time is taken up by the filming. From the end of June, his photo exhibition opens in 4 Japanese cities, and a JKS Festival will be held in Tokyo. To commemorate the broadcasting of “You are Beautiful” in Japan, there will be a series of performances too.

Despite the “killing” schedule that does not even allow for a chance to catch one’s breath, Jang Keun Suk has willingly agreed to take time for the interview by “Sports Seoul” for its 26th anniversary. YMP filming ended at 3 am on the previous day, and JKS says that “all his brain cells are paralysed”. Despite his jokes, his nervousness at facing two “aggressive” reporters showed up briefly. When the camera snapped away furiously, JKS “instinctively” acted scared. Quick-witted and playful answers – this is the charm and secret to the popularity of Jang Keun Suk who stands at the centre of the Hallyu wave, possessing both intelligence and capability, with his analysis of Hallyu and his acting skill.

Part of the interview (not in Tengxun translation)

S: Which work to you have a special meaning?

J: My first movie “Happy Life” which I acted in with my seniors. It’s also a movie that has caused much impact on me. Not just in acting skill, I have also gained many learning points from acting with my seniors. One day, my seniors went to have breakfast of pig’s blood, intestines and so-ju, dressed in slippers and sports attire. As I saw their amazing focus during acting, and yet after the end of filming, they are like ordinary people as they ate, I could not help but think, “Where does that self-confidence come from?” The answer is their sense of pride in their profession as an actor. If one feels proud of one’s career, one can live upright and frank regardless of time and place. That is the real life of an actor. What is important is not to show others, but to have an upright and frank attitude towards oneself.