Hi all, apologies for disappearing online for 2 days since Friday 3 June; everything has been so hectic and rushed. By now, I would assume other sources would have updated news of JKS and his events in Kuala Lumpur, so here is just a very quick runover.

After a rather comfy coach ride overnight, we arrived in Kuala Lumpur on Saturday 4 June at 5 am, and checked in at Berjaya Times Square Hotel to take a short rest and freshen up. We were meeting Carol70 in the morning to take me to Central Market to collect something (for me to ask JKS to sign on it, which I’ll scan later when back home), then we went to JW Marriott to check in. Um, our hotel arrangement in KL was slightly complicated, as some of us had booked a room at Marriott to be closer to JKS.

We reached Marriott at 11 am, discovered a group of eels there and realised our dear JKS was going to exit the hotel to go for his rehearsal. So we waited there, and waited, and waited …. Now, perhaps it’s part of my nature to complain, but I must really gripe about the unfairness of security staff in general, particularly in their treatment towards fans.

The Marriott lobby area towards the main entrance is circular, with a big floral centrepiece in the centre, so when JKS comes out, he’ll either go towards either side of the circular pathway which leads to two glass entrances. In between the two entrances was a glass panelled wall, and there was a Western couple standing against the glass wall, waiting out of curiosity to see who the star was. As more and more fans lined the side of the circular walkway, Carol and I decided to move to the glass panelled wall in front of the Western couple (they were taller, so we didn’t obstruct their view at all). That position would give us a clear view of JKS coming down either side of the walkway.

Then, as with security all over, the Marriott security staff came to chase us, specifically me. He said I was blocking the door. ?! The glass panelled wall was between the doors; there was no exit through the glass wall and I was not blocking the door at all. The security asked me to go over to the other side, which was already so crowded with fans, I wouldn’t be able to get a good view at all, and I would be blocking part of the door (was he blind??). I was very reluctant to move but at the security’s insistence, I did so.

Then after a few minutes, another Asian lady came to stand in the position I just vacated. I looked at the security – no response from him. He knew the lady was there and did not even ask her to move. I got angry and told the security, why did I have to move if he’s not chasing away the other lady? He then reluctantly went over to the lady and told her that I was the one who asked her to move.!! The cheek of the guy! Why did I have to move, if the other 3 people standing at the same place were not chased away? Do I look like I can be bullied?? The Asian lady just looked at the security, but did not even reply to him and continued to stand there. The security shrugged, gave up and walked away… After some time, that Asian lady left, and I went back to that place to re-join Carol. The security knew that I had moved but perhaps by that time, he had given up as crowd management was getting a bit tough.

Anyway, I did not get a clear video of JKS here. I had trained my camera on one side of the circular pathway because they had allowed fans to gather and block the other glass door, so we believed that JKS would be coming down the right side. When finally screams indicated his arrival, my camera was focused on the right side, and Jason and Kurt came into view. What we did not know, was that there was some chaos on the right side and JKS had veered and used the left pathway to exit via the other glass door. So everything was chaotic….

CrazyoverJKS has gotten a better video of JKS here, and perhaps she can share the link with us later. 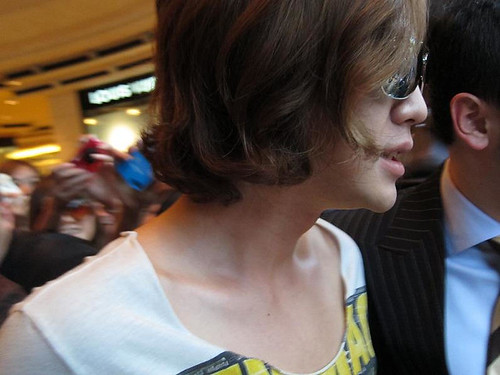 Am skipping several logistic details….After the commotion at the reception, we went to buy lunch back to eat in the hotel room, and went to the autograph / photo venue at Bintang II function room at Marriott level 3. CrazyoverJKS, Chicken Little and Sophie already had their tickets (thanks to Carol who had collected them earlier for us), but I needed to look for Ning to collect my ticket.

The good good news for me is, I finally managed to get the VVIP autograph ticket one week before the KL Cri Show!!! My dream came true again!! I managed to buy the VVIP ticket from another Singapore eel who could not go in the end, and I sold my VIP photograph ticket to crazyoverjks.

Ning wasn’t at the venue yet at 3.40 pm (event starts at 4 pm), so I was anxious and called and texted her. Finally, I got a response from her and managed to collect my ticket from her ten minutes before 4 pm.

Jang Keun Suk Fans Club Malaysia really put in so much thought and effort into preparing gifts for JKS. First, they prepared a very big gift-box that was almost half the size of a man. Inside was a scrapbook containing photos of the Malaysian eels, and also a set of pewter wineglasses with Tree-J logo embossed on it, amongst other things. I’d like to elaborate on the gifts in a later post (hopefully sometime soon).

I finally had a chance to see JKS one-to-one in closer proximity!! Again, Carol was really wonderful here. I wanted to get an artist at a shop to draw a portrait of JKS, so that he could sign on it, but it was a last-minute decision. The cost of doing it was cheaper in Malaysia. Carol had to take the time and effort to go to the shop and enquire, come back and email me the price details, get my decision to go ahead with the order, go down to the shop during lunchtime again the next day to place an order and deposit, and communicate with the artist on my behalf. It’s a lot of work! I feel so bad that I have to trouble her ….

I was feeling quite excited about getting JKS’ autograph for the first time – I’ve been waiting for an autograph chance for such a long time!! When it was my turn, I went up to JKS and passed him the portrait to sign. When he saw it, his eyes opened wide in surprise and he asked whether I drew it. I told him no, I got someone to draw it for me, then he went “ohhh…”

As he signed for me, I asked him a question that has been on my mind for some time: Will the 20th anniversary dinner show in Korea be in a big place because many of us want to go? Part of his attention was divided to the signing, so I repeated the question. He said, “Maybe …. Yes, the event will be in a big place.” Because I said many of us want to go, he said thanks! And all the time he was signing and I was asking my question, I kept staring at his exquisite face – he is so beautiful up close!! Last, I held up my hands to him and he clenched my hands in the eel way – his grip is surprisingly quite firm! After I walked out of the stage area, I was so happy!! I ran up to my friend Sophie standing at the side, and just had to tell her he is sooo beautiful!!