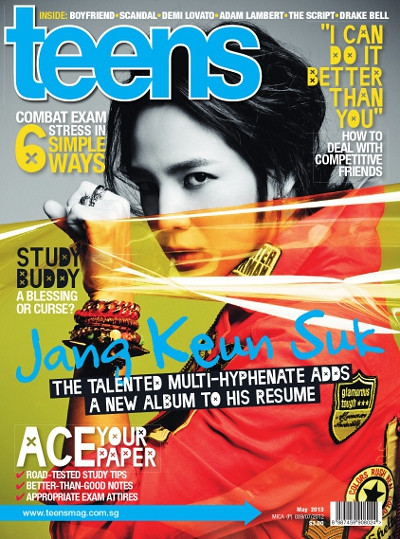 It seems there’s no stopping Asia Prince Jang Keun Suk, as he adds another feature in his cap.

While most 25-year-olds are stranded at the crossroads of their lives, Jang Keun Suk has been living his dream for the past two decades. However, unlike those who shoot to instant fame after their first television appearance, the multi-hyphenate, who made his foray into the entertainment circuit at a tender age of five, only saw his career coming up roses, only after the blazing success of his 2009 drama, You’re Beautiful, which catapulted him to the crest of the Hallyu wave.

Like most top stars, Keun Suk’s road to success was fraught with so many difficulties and tears that his life story could possibly be made into an autobiography.

At a young age where his peers were playing with Ultraman figurines and kicking a ball around a field, Keun Suk was forced to grow up prematurely in an industry that grants no special treatment to the young. In KBS documentary The Center of the New Hallyu, I Am Jang Keun Suk, he said, “Even if it’s a five-year-old’s role, the child is given the responsibility of a working man. I started out like that. No matter how tired I was, no matter how much I wanted to cry or sleep, how hungry I was, how badly I wanted to go home or play with my friends, I had to forget all these at the filming venue.”

On the same show, he also lamented about the price he had to pay for fame. “Before [You’re Beautiful], I spent 20 years [in the industry]. In those 20 years, I had no friends in school and no memory [of] a lot of other things.” His growing up years might have been salted with tears and tinged with loneliness, but not once has be allowed himself to be bogged down by past regrets. He mused, “It’s pointless [having regrets] now.”

By the time he grew into his teens, Keun Suk was already earning his own keep. He revealed on an episode of Knee-Drop Guru that his mom signed him up to be an underwear model when he was a freshman in junior high. Embarrassed and afraid of being teased by his friends, the young Keun Suk was adamant against doing it, even begging his mother in tears. But once he heard the shutter of the camera, he realized that he wanted to be in front of the lens. Using his salary of 2,200,000 won (about S$2,400) from the gig, he settled a year’s worth of house rent.

That independent and resilient streak is probably the driving force that shaped the star today. Widely known for his blunt, straightforward personality, Keun Suk has ruffled many feathers (he even admitted that he is hated by most males), but at the same time, his bizarre antics and humility have stolen the hearts of hundreds of thousands of fans across the globe. 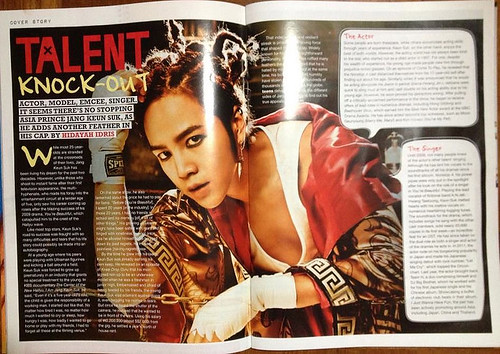 THE ACTOR
Some people are born thespians, while others accumulate acting skills through years of experience. Keun Suk, on the other hand, enjoys the best of both worlds. However, the acting world has not always been kind to the star, who started out as a child actor in 1997.

For one, despite his wealth of experience, his young age made people view him through prejudice-tinted glasses. On an episode of Come to Play, he revealed that the Nonstop 4 cast distanced themselves from his 17-year-old self after finding out about his age. Similarly, when it was announced that he would be acting alongside Ha Jiwon in period drama Hwang Jin-I, netizens were quick to sling mud at him and cast doubts on his acting ability due to his young age. However, he soon proved his detractors wrong. After pulling off a critically-acclaimed performance in the show, he began to receive offers of lead roles in numerous drams, including Hong Gildong and Beethoven Virus, which earned him the Best New Actor Award at the MBC Drama Awards. He has since acted opposite top actresses, such as Moon Geunyong (Mary Me, Mary) and Kim Haneul (You’re My Pet).

THE SINGER
Until 2009, not many people knew of the actor’s other talent : singing. Although he has lent his vocals t the soundtracks of his drams since his first sitcom, Nonstop 4, his power pipes were only put in the spotlight after he took on the role of a singer in You’re Beautiful. Play the lead vocalist of fictional band, A.N.Jell, Hwang Taekyung, Keun Suk melted hears with his mellow vocals on numerous heartstring-tugging tunes. The soundtrack for the drama, which includes songs he sang with the other cast members, sold nearly 20,000 copies in its first week – an incredible feat fr an OST.

He has since taken on the dual role as both a singer and actor of the drams he acts in. In 2011, the actor rode on his burgeoning popularity in Japan and made his Japanese singing debut with rock number, “Let Me Cry”, which topped the Oricon Chart. Last year, the actor brought back Team H, a duo comprising himself and DJ Big Brother, whom he worked with for his first Japanese single and his Chinese album. Showcasing a buffet of electronic club beats in their album, I Just Wanna Have Fun, the pair has been actively promoting around Asia, including Japan, China and Thailand. 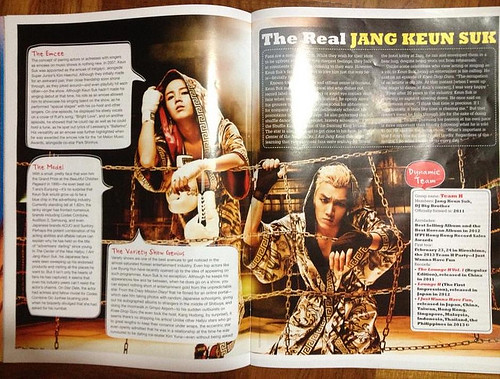 THE EMCEE
The concept of pairing actors or actresses with singers as emcees on music shows is nothing new. In 2007, Keun Suk was appointed as the emcee of Inkigayo, alongside Super Junior’s Kim Heechul. Although they initially made for an awkward pair, their close friendship soon shone through, as they joked around – and even playfully hit each other – on the show.

Although Keun Suk hadn’t made his singing debut at that time, his role as an emcee allowed him to showcase his singing talent on the show, as he performed “special stages” with his co-host and other singers. On one episode, he displayed his steely vocals on a cover of R.ef’s song, “Bright Love”, and on another episode, he showed that he could rap as well as he could hold a tune, as he spat out lyrics of Leessang’s “Ballerino”. His versatility as an emcee was further highlighted when he was awarded the emcee role for the 1st Melon Music Awards, alongside co-star Park Shinhye.

THE MODEL
With a small pretty face that won him the Grand Prize at the Beautiful Children Pageant in 1995 – he even beat out T-ara’s Eunjung – it’s no surprise that Keun Suk would grow up to be a blue chip in the advertising industry.

Currently standing tall at 1.82m, the lanky singer has fronted numerous brands including Codes Combine, Audition 2, Samsung, and even Japanese brands ACUO and Suntory. Perhaps the potent combination of his acting abilities and affable nature can explain why he has held on the to title of “advertisers’ darling” since young.

In The Centre of the New Hallyu, I Am Jang Keun Suk, his Japanese fans were seen sweeping up his endorsed products and visiting all the places he went to. But it isn’t only the hearts of fans he has captured; it seems that even his industry peers can’t resist the actor’s charms. On Star Date, the actor had actress and fellow model for Codes Combine, Go Junhee, blushing pink when he brazenly divulged that she had asked for his number. 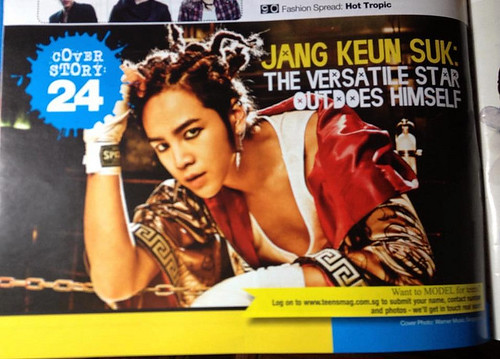 THE VARIETY SHOW GENIUS
Variety Shows are one of the best avenues to get noticed in the almost-saturated Korean entertainment industry. Even top actors like Lee Byung Hun have recently opened up to the idea of appearing on such programmes. Keun Suk is no exception. Although he keeps his appearances few and far between, when he does go on a show, you can expect nothing short of entertainment gold from the unpredictable star.

From the Crazy Mission Diary! that he filmed for an online portal – which saw him taking photos with random Japanese schoolgirls, giving out his autographed albums to strangers in the middle of Shibuya, and doing the moonwalk in Gimpo Airport – to his sudden outbursts on Knee-Drop Guru (he even took the host, Kang Hodong, by surprise!), it seems there’s no stopping his antics! Unlike other Hallyu stars who go to great lengths to keep their romance under wraps, the eccentric star even openly admitted that he was in a relationship at the time he was rumored to be dating ice-skater Kim Yuna – even without being asked!

The Real JANG KEUN SUK
Fans are a complex bunch. While they wish for their idols to be upfront and reveal their deepest feelings, they balk at comments that are not pleasing to their ears. However, Keun Suk’s fans have learnt to love him just the way he is – brutally honest and all.

Known for his frankness and offbeat sense of humor, Keun Suk may not be the typical idol who dishes out record label-approved answers or avoid eye-contact with fans when walking past them. Instead, he openly aired his grouses on national television about his abhorrence for company executives who deliberately schedule his promotions on his school days.; he also performed his shuffle dance at Rain’s concert, bravely screaming “I’m the Shuffle King!” in front of the Dancing King himself. The star is also not afraid t get close to his fans. In The Centre of the New Hallyu, I am Jang Keun Suk, after learning that two Japanese fans were waiting for him at the hotel lobby at 2am, he ran and enveloped them in a bear hug, despite being worn out from rehearsals.

Unlike some celebrities who view acting or singing as a job, to Keun Suk, being an entertainer is his calling. He said on an episode of Knee-Drop Guru, “The occupation of an artiste is my life. At that instant [when I went up the stage to dance at Rain’s concert], I was very happy.”

Even after 20 years in the industry, Keun Suk is showing no signs of slowing down. He once said on a television show, “I think that time is precious. If I walk quickly, it feels like time is chasing me.” But that doesn’t mean he tolls through his life for the sake of doing something. To him, pursing his passion at his own pace is more important than blindly following what he is told to do. He said on the same show, “What’s important is that I don’t live too hastily and tiredly. Regardless of the results, I do what I want to do every day.”