UPDATE: 10Asia has English version of this article (full) out. The link is here, please click to read. Since the Chinese translation we used for English translation had some parts missed out. This is an article worth to read it in full again.
http://www.tenasia.com/jang-keun-suks-song-picks/ 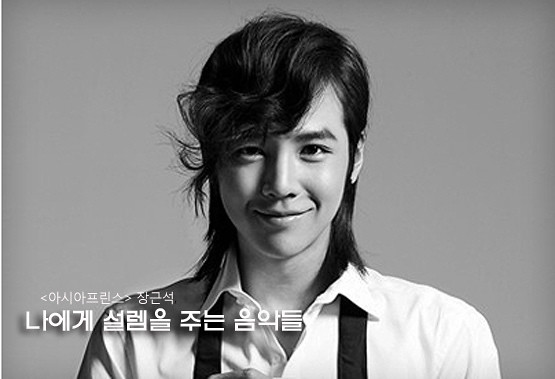 I like to take Risk, I hate to repeat same thing again
At this point, it’s not exaggerating to say it’s like a cowboy riding on a horse in the open land and pluging his flag onto the greens. As a No.1 Hallyu star, he is one of the few actor that no one can doubt his abilities. Not just acting, now also as a singer he is venturing into a new area. With his music partner Big Brother, they formed music group Team H, they have completed concert shows in 4 cities in Japan and also China, Thailand, Taiwan.

As of speaking a joke, if he want to surpass Asia Prince, move to being World Prince, then he is preparing quietly and planning step by step. You can see the success of the 20 years since his debut. It’s been 10 years since he shot the drama “Women’s World” (2001) as a child actor and now he’s an adult, in 2003 he challenged acting in a sitcom Nonstop4, in 2006 he became an outstanding mature actor when he played in Huang Jin Yi, later he did movies Happy Life, Itaewon Homicide, Doremifasolasido, Baby & Me, You Are My Pet, & dramas You’re Beautiful, Mary Stayed All Night Out, Love Rain to become Asian sensation.

The secret of Jang Keun Suk who is looking forward to his performance in America is ‘never compromise’. During making Japanese single ‘Let Me Cry’, he persuaded Japanese staff insisted to use Korean music composer, in Japanese programme he yelled out loud and cheered with his arms up ‘I love kimchi soup’! He has a slim figure which thiner than the ladies but with unbelievable endurance
.
He always looks like he is full of energy but there are times that he is exhausted and feel worn out. At this time, he will choose some healing music which can help him go through the difficult time. Let’s enjoy together some the music he listen, these music bring him the energy and bring feelings.

For this G.O.D. Album, Jang Keun Suk said: The song “Road” in this ablum is truly the song I always listen when I was in my most difficult time. The life of an artist quite often has painful moments. At the time of that, just quietly sitting there, close you eyes and listen to the music. The song is full of philosophy. I will rewind my life and also seeing the future.

The 20ish Hallyu Star has infinite possibilities.
If you listen quietly for these songs which chosen by Jang Keun Suk. You will find he is not like what was described in “Hallyu Trend Report” which was released by Korean Culture Properties Exchange Group, that he is “an successor of Bae Yong Joon.” But he is more of a free soul Jang Keun Suk. After his concerts at overseas, he would went to night club enjoying DJing. This is a passionate enjoy life 20ish young man.