— Background —
Being a rather new eel, I was thrilled when I heard that Team H is going to have a
party in Bangkok, in my heart, I was screaming “Yay! It’s just two hours flight away,
I must go to see him myself!” Yes, this is my first time ever, seeing Jang Keun Suk in
real person… Prior to my trip, every day I was counting down to the day I finally fly
to Bangkok… reading all the FA from sisters at ECI only adds to my excitement,
wishing time would pass by faster…
Team H, I really love their music, the beat, their voice… listening to their new album
“I Just Wanna Have Fun” totally brings out my dancing mood, I’ve been listening to
their album almost every day since I bought it.

— 21 March 2013 – Thursday —
Waiting for him at the arrival gate patiently on Thursday night, with a lot of his
fans… It was my first time seeing and experiencing such thing. When we saw the
dancers came out, everyone practically screams and starts snapping photos and
taking videos… and when he finally appears, everyone just went crazy! There’s a
bunch of security around him but still, got to see the real him for the very first
time… my heart just keep beating faster. He totally stands out from the crowd; my
eyes couldn’t see anything else besides him… He looks tired but he still smiles and
wave to his fans. Only got to know that he was in an accident the next morning… 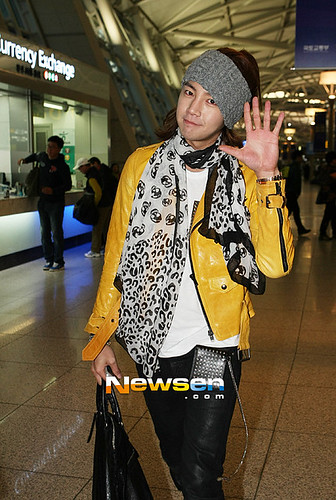 — 22 March 2003 – Friday —
Knowing that he got into an accident, I got a little worried, but keep thinking that “If
he can fly here, it means he’s okay, right?” The three of us were chatting for the
whole afternoon, everything about our dear Prince, ehehe… and guess what? We
were truly lucky to come face to face with his manager. We were very excited, for a
moment, almost forgot about our gift to him, Eels’ Choice. We managed to pass the
gift to his manager in the end, but I was so excited that I forgot how to operate the
camera… and my hands were actually shaking slightly during the whole encounter.
Later in the evening at his press conference which was held at an outdoor venue…
we didn’t really get to see him up close since we got there quite late. It was really
crowded and he’s yet to appear even though it’s already past the stated starting time. Since
we couldn’t really see him from so far away and thought that we wouldn’t be able to
understand either Korean or Thai (translated), we decided to go to a café on the
higher floor of the shopping mall beside to catch a glimpse of him instead. He
appeared in very casual attire; though my eyes can only stare at his handsome face
all the time… really can’t see anything else other than his perfect face. 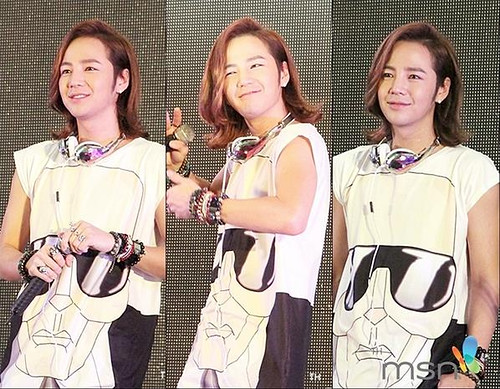 — 23 March 2003 – Saturday —
Finally, the day of Team H party! Four girls dressing up and getting ready to leave
for the venue… going in and out of the room and bathroom, trying to find stuff and
rushing… it was really fun! XD When we reached the venue, it was packed with
people… got ourselves some merchandises and met up with the other sisters from
ECI, and I’m already in super-excited mode at that time…
Going into the hall, we realized that food and drinks are not allowed, so we had to
give up our beer that we prepared earlier… a little disappointing. When we got to
our seats, I realized it was super near to the stage… fifth row! We could see the
whole stage clearly without the big screen, it was really nice! Not very long after,
the party started!
Frankly, there are things that I can’t recall but I try my best… During the entire
show, my eyes were focused on the sexy and wild Jang Keun Suk! He was like a
totally different person from when he was at the press conference and earlier
encounters. He sings, he dances, and he jumps around… totally transformed to a
professional entertainer. His voice was perfect, very manly with hints of sexiness.
His body moved like a snake… twisting and showing off, what a sexy and naughty
guy. While he was dancing and jumping around, he fell down and hurt his knees…
clumsy! Like all his other show, he was really mischievous back stage, playing with
the staff and teasing them, it was really fun watching.
He changed a few times, I do remember he came out with totally ripped black
pants, showing off his sexy long legs at many different occasions… then switched to
short pants, and lastly, leopard print pants with a tail! And he tore off his shirt
during encore, showing off his sexy, slim, perfect body! With tattoos at the right
places, such a teaser! 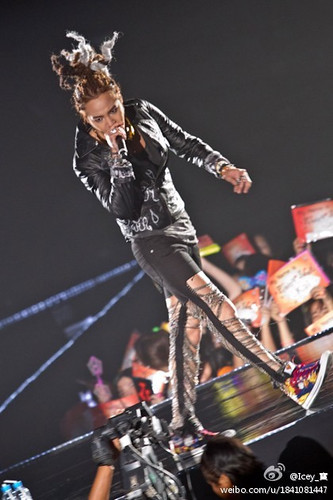 Stephanie was his guest that night; she joined him and BB on the stage, singing
“Party Tonight”. She looks really beautiful and hot, with a really nice voice too. They
danced together on stage while singing, it was very alluring. During encore, I caught
a glimpse of BB going down near the audience while JKS was at the other side of the
stage… and everyone went crazy trying to touch him.
During the whole two hours of the show, I was dancing, waving and moving with the
music, in high heels, it’s a little narrow to make any big movements, and I think we
bump into each other a few times, didn’t we, Winnie, Rose? =P The whole hall
transformed into a giant club, everyone waving their lights and moving along with
the music, the atmosphere is totally high! The only time we get to sit down and rest
is during their backstage chat, which we couldn’t understand since JKS and BB
spoke in Korean and it was translated to Thai.
All in all, the whole night is overflowed with excitement, my eyes locked onto the
hot and sexy Jang Keun Suk most of the time, and it was really mesmerizing, feels
like I am in a different world. A wonderful world filled with so much excitement,
great music, awesome friends, handsome hot guys… wished the time would just
stop there forever. 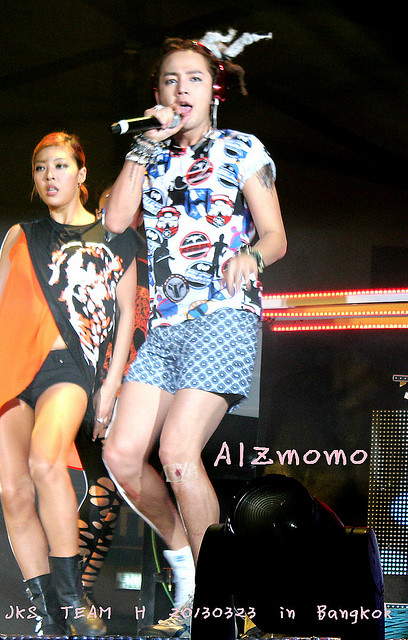 — 24 March 2003 – Sunday —
Leaving Bangkok Sunday noon, not only I am bringing back all the wonderful and
precious memories of my encounters with dear Jang Keun Suk, I also made new
friends over the weekend, spent so much quality and happy time together, this
bond is special and it is only made possible because of the very same man we all
love. I would love to express my gratitude to Sheok Wan, Eileen and Rose especially;
really grateful to be able to join you girls for this crazy adventure, hopefully we will
get to do this again someday somewhere!
Jang Keun Suk, you have added so many precious moments into my life, I will
treasure them, close to my heart, always… thank you! Till we meet again.