Credit: missyleen / some excerpts of the show account from: Lian Siew Hin

A few eels and myself checked in the same hotel as him on Friday (Oct 26) night, I shall leave the fine details in this account but we were lucky to have bumped into Jason / MJ / Young Duh (the young manager) a couple of times in the hotel. We were lucky to have waited for Jang Keun Suk and managed to catch a glimpse of him with other eels on 3 occasions. 1- After Tongyi event (Jang Keun Suk private FM), boarding his car to the show venue, 2- basement lift lobby at the night club after his cri show, 3 – hotel, departing to the airport on Sunday. 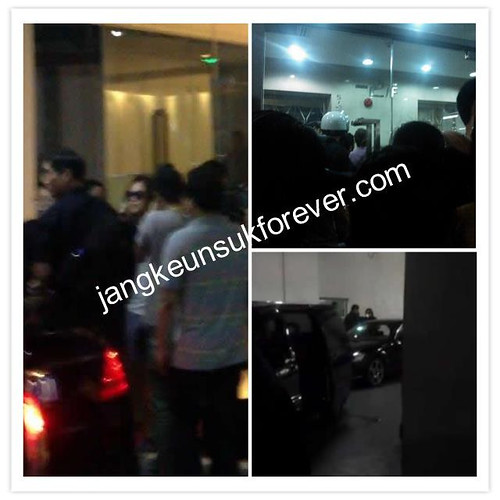 Saturday morning (Oct 27) 1am, we thought of giving him something memorable since we were so near him and stayed in the same hotel! Because of time constraint, we decided to compile the contents that we have done in our recent 2 projects – Mini letter project that was done up 2 months back in ECI, all the messages have been posted on Jang Keun Suk official fan club site Cri-J by sis Sheok Wan Lai and another latest project as seen here: http://jangkeunsukforever.com/archives/18518

We consolidate the contents till 4am, and woke up at 7am to get it all printed and bindered in the business center in the hotel, hoping we can pass it to any of the Tree J staff if opportunity arises.
Saturday afternoon – 2pm, we spotted Mama Jang and Auntie Jang coming out from the lift and walking to the lobby!! We were eccentric! We were good, no shouting and kept a distance but we were excited. They were waiting for their car to arrive where one of us hurried one of the sisters to pass the gift to them!!!! Yes it had totally slipped off our mind due to our excitement. One of us quickly rushed forward and pass the gift to Mama Jang, Auntie Jang accepted the gift on her behalf!!!!! yay! A huge success. 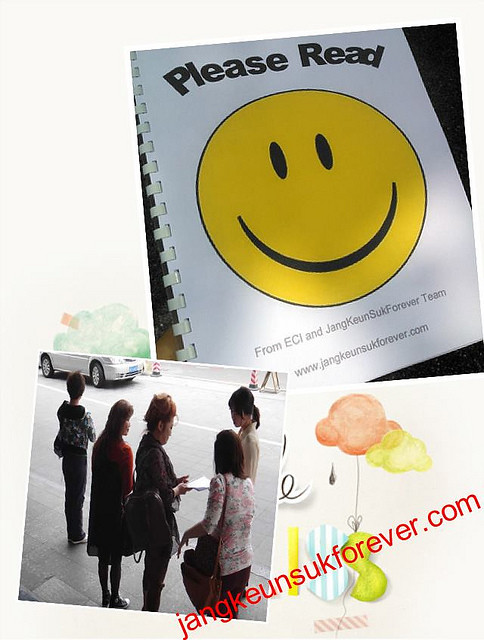 Saturday afternoon – 11am, we went to Cri Show venue in the late morning on Saturday to purchase some merchandise and coincidentally meet all the ECI sisters unplanned!!!! ECI is like a big family, I have not met many of them before and yet, they can call out my name and identify themselves, we mingle like long lost friends!! It was a very impromptu gathering and I’m glad they have enjoyed themselves as much as I do.. We call it eels’ power and I hope prince should be proud of this unity among the eels world.. We were from Singapore, Thailand, Malaysia, Russia, Philippines, China and Hong Kong. This is the largest group photo with representatives from JKSland (Chinese fan club), ECI sisters and some passerby eels which we have no idea who they were.. Many stopped by to look at us because we were having tons of fun there snapping photos with ECI friends! More and more eels gathered around us and we rallied them in to have a shot. They were glad to be invited to be included in the photos.. So the group photo was filled up with more and more international eels.. This was the most heart-warming photo taken with eels of all nationalities.. Eels from Singapore, Thailand, Malaysia, Russia, Philippines, China, Hong Kong gathered together!;) The day when strangers become friends, because love bring eels together despite differences in languages and culture… And I am fortunate to be part of it! 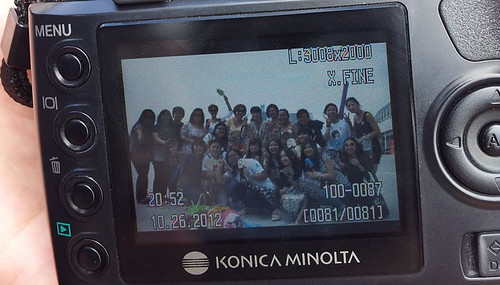 SHOW: Many Chinese fan club representatives were giving out free goodies outside the show venue.. Stickers / temporary tattoos, fan with his printed photos, banners, white light sticks were given out.. We have to show our Cri Show tickets in order to redeem. To make sure we give him a white world, I’m so touched by the representatives from JKSland, (Chinese fan club) they were reminding everyone at the queue before entering the show to use only white light sticks and gave out free light sticks to make sure all of us will be holding one. It was very nice of them..! There were many raving reports about his stage presence and performance so I shall leave that out in this fan account. I shall include my personal comment and feelings to it, so that you can feel it from my perspective…. Show was delayed and started at 8pm due to some problem with the sound system. Chinese fan club representatives were heard shouted “white color” every time someone turns on a colored light until that person turns it off. The shouts of “white color” happened a few times before the show started and after the first time, it seems like everyone was shouting together as one. The atmosphere was great and the eels were amazing! Many male eels were spotted; some were seen with their significant half ad some came alone or with group male eels. Some eels came with their husband / wife and children and it was an incredible sight!! He started with 3 fast songs, in my personal opinion he didn’t seem to be in good mood and didn’t sound like he was in top form.. He started his first talk session by telling us he’s feeling nervous because this is his last Cri Show, and feels so unreal. He was also asking where the Shenzhen eels are and many replied. Then he said he was told that there were many international eels there last night and almost as many screamed. He teased us back and said he is becoming world prince soon and not just Asia Prince! Then his mood changed and he was much happier – the show started getting high from there. That was when the cheeky winks, cute V smiles and flying kisses started flying all over crowd. In another of his talk session, he said WOW the atmosphere is overwhelming and high. Then he said he knows that many of us have been worried about him when he did not post in twitter and weibo for so long. So he wanted to tell us why – HE IS IN LOVE. Then he said (in Chinese) IT IS A LIE – and gave us his wide cheeky sexy grin. He said the real reason he was silent was because he had been travelling alone to seriously think about what he wants to do next and he DID NOT HAVE HIS HANDPHONE with him. Eels all shouted IT IS A LIE! He also shared his plan to release an album under Team H in China and he will be back soon, (at an unidentified date) and he wants us to wait for him and not becoming a kabayaki.. He’s so professional! Even I feel for him. His perspiration were falling like rain, must be dead tired! Around the 10th song, he asked if we’re happy, we said yes, he said I’m almost dead from tiredness! He’s so frank & unpretentious! As the show progress, his mood got higher and happier. The ECI eels that were with me agreed that he was in a super happy mood and the atmosphere were much better than in Taiwan. We could see that twinkle in his eyes that has been missing for so long. The crowd and atmosphere were splendid! Eels were passionate, they were screaming and chanting his names, and he chanted his name with us too.. With the nice white world ambiance, I hope he was moved, just like I do and I believe this show means a lot to him to whatever he may be going through right now. We sang along with him, he said Jyo, we said Zikzin, there is so much of interaction between master and eels.. Just like what he always said, like having a relationship with eels, he glowed on stage, and we were totally mercerized.. He’s moved and so were we!:):)

My regret.. After meeting all these important people in his life.. I regretted not telling them to pass on the message to him, that I am actually from _______ together with few other eels from other countries namely from Singapore, Thailand, Malaysia, Russia, Philippines, China and Hongkong and we flew in especially to watch the show, and tell him how much we love him!!! Arrrgrgghhhh we were too excited and I totally forgotten about it.. And we have many chances to do that!!!!

Overall in all, I’m feeling accomplished to be able to fulfill something that I’m always longing to do.. A sense of happiness and bliss of what I have done for him, not what he has done for me.. ;);) I’m thankful to be able to be part of this show in Shenzhen with an amazing crowd who were there to create a memorable atmosphere for him, I’m glad we did it and I’m honored to be able to participate and contribute a part of it. It has been memorable for me too. Eels who cheered, screamed and chant his names, in unity.. That’s the spirit! Because we want to continue walk with him and cheered him on like this in the next 20 years, and many more 20 years to come!