Due to protect Jang Keun Suk’s and certain party’s right. We WILL NOT reveal any detail about the photo shoot. Let’s enjoy the excitement of an eel meet him in Berlin on site! 🙂

I walked through Berlin a lot yesterday and today. Since Monday I can’t concentrate on the city itself^^
But Berlin is so big. I was so tired I wanted to go back to my hotel to sleep.
Then I saw a bus from the same travel agency as the one who was at the airport. This one today was not that big, the door was open.
Suddenly Jang Keun Suk crossed the pavement in front of my eyes and went on the bus.
That was so unexpected. My heart began racing fast immediately. I saw MJ near the bus too and then I knew I didn’t imagine this was happening ^^
I sat down by a pillar and waited. After a while he came out of the bus and went with his staff to the fountain. I followed them and sat down on a stone wall near the fountain.

Zo Sun Hi and staff worked with him to do the pose by the fountain, then Zo Sun Hi took photos, MJ took photos too XD. There were few people around the fountain who starred at him because of the photoshoot. Then he looked at me and said Annyeong and waved to me. My heart was racing, I was so excited. ^^. I’m a shy person… to see him look only at me… All I could do was smiling and waving him back. 😛

More photoshoot has been done. When the shoot on the fountain was over, he smoked a little bit after the last shot and talked with MJ while walking back to the bus. He went on the bus and get changed (I assume lol.) I didn’t see him come out of the bus after this. But then there he was, he opened the curtain a bit and looked at me, he waved and then made this sign with bending middle and index finger two times. How cute! Then the staff went on the bus and I waved them goodbye ^^

He seems not so tired and was being professional during shooting. The shooting was about 15 minutes long. After this I tried to follow the bus slowly but of course I lost him. Somehow I walked into circle and ended up at the fountain again. I took photo of the fountain, my favorite fountain. ^^

Here is a picture of the fountain that Jang Keun Suk did photoshoot. Eels use your imaginations!!! 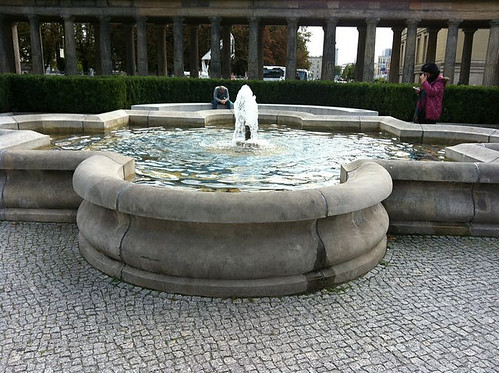 a more overview shot of the fountain with surroundings, so beautiful, looking forward to this calendar! 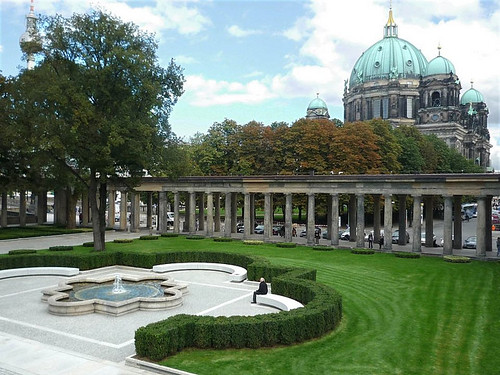 Note: The fountain has no name. It is part of a place called “Kolonnadenhof” in front of the museum “Alte Nationgalerie”, but I bet eels would remember this fountain.