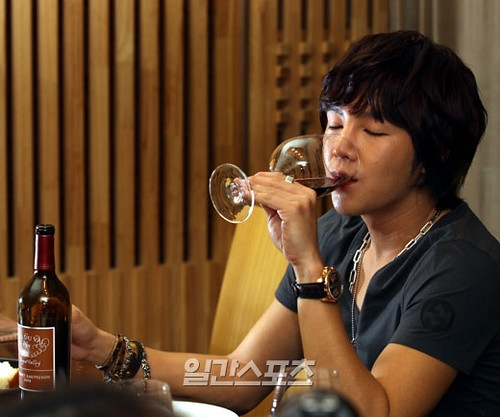 Q: Want to know the real JKS. Is JKS masculine? Or a herbivore man?
JKS: Masculine. Not suppressing the other party by force, but I want to become a courageous and decisive person.

Q: How do you view disputes?
JKS: All along, I advocate the world as one home. If there can be peaceful talks, problems can be solved quickly.

Q: Why do you have the nickname “little old man”?
JKS: As for that, I don’t understand too. Very puzzled (laughs).

Q: Do you agree your character is not within your control?
JKS: I’ll come up with many unpredictable actions. Not sure that I want to go towards a certain direction, just that I don’t want to keep still. I’ll say first what my major goal is ……. so it has been seen as being far from modest.

His greatest charm lies indeed in his unpredictability. Last month at the Tokyo Dome concert, Japanese fans mentioned that they liked JKS because they cannot completely predict his speech and actions. In fact, before the Tokyo concert and after the Shibuya press conference, JKS did a startling act to the team of interviewing media. After the press conference ended, he returned to the bus for interview and then parked on the busy Shibuya street. He started walking on the road by himself to bid farewell.

The comical act of kissing passers-by’ hands attracted many screams and camera flashlights from the crowd. JKS said, “Sometimes, spontaneous actions make the crew very nervous. Today, this extent is nothing much. There is nothing much to do.” The manager following JKS shook his head.

JKS’ surprising appearance when Kim Ha-neul won the Best Actress Award at Daejong Awards on 17 Oct also made for much talk. As both acted together in “You’re my Pet”, JKS turned up with flowers to congratulate KHN, and when KHN was giving her thank-you speech, JKS was censured for winking behind KHN.

JKS: That day, I had lessons at school, but I felt I would have regrets if I did not go, so I directly called the organisers to ask whether Sister KHN was on the prizewinners list. Winning an award is of course a good thing … even if she did not get an award, I was planning to console her. Just that my sudden appearance while she was giving her speech caused a big commotion ….

Q: If you have the time now, where would you want to go?
JKS: I want to go to nightclub, the one at Gang-nam … I know (I) like to sing and dance…… (laughs)
Q: Why do you draw such thick eyeliner?

JKS: I am most confident of my eyes… feels like weaknesses and advantage emerge. I only put on thick eyeliner during photo shoot; I don’t do that at school. (laughs)