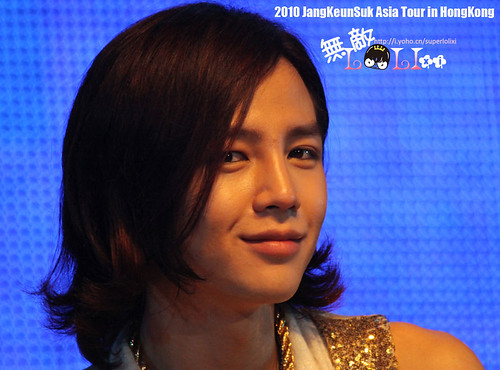 Celebrities really have the power to stimulate the economy i.e. get people to spend more money. Just look at Jang Keun Suk for example. His popular dramas and movies must have sold lots of CDs and DVDs overseas notwithstanding online proliferancy, not to mention all the “You Are Beautiful” accessories (stickers, earrings, keychain, pig rabbit stuffed toys etc). Then he embarked on his Asia Tour 2010. Not only were all his fan-meeting tickets sold out usually within the first day of ticket purchase (and they don’t come cheap), fans trailed him from country to country, spending on airfare, hotel etc.

On the rising tide of JKS’ popularity comes more commercial offers. Ever since his commercial debut at the age of 5, JKS has been fortunate, with commercial endorsements pouring in almost every year. Just this year alone, he has been to China and Thailand to shoot advertisements.

Then the guy decides to cut a music album – a prayer answered for thousands of fans. On the same day of the album announcement, pre-order was available in Japan and on the first day, some official website Twitter somewhere announced that the limited edition with DVD was sold out. By the second day, his album pre-sales has already topped the HMV Japan chart.

I digress. Going back to my topic, and no it’s not about the travel bug biting JKS; instead, it bites me. Hard. Ouch! Every single country that JKS visits, I think about visiting it and catching one of his events, or just to catch a glimpse of him in person. I wanted to go to Bangkok, but gave up, knowing how hard it is to communicate in a foreign language. Also, he wouldn’t be giving any performances in Bangkok and I thought I wouldn’t be able to see him much. That was a right decision on hindsight.

And since this Tues, I’ve been doing desperate research online, hoping against hope that I may be able to factor in a sudden trip to Seoul for this Sat’s casual fan-meeting and Lounge H – two events in a day in the proximity offered by a ticketed venue, isn’t that worth it even if it means that I have to fly there on Sat and depart on Sun? Then the buts come in. But I don’t understand Korean and won’t know what he’s saying at the events without a translator. But I don’t know how to get tickets to the events, being all in Korean. But he won’t be singing – I want to hear him sing live in a concert. But it’s -12 degrees celcius in Seoul when I think that 18 degrees is freezing.

Every time JKS travels, it’s a battle between my logic and my impulsion to see him. Since my family and I don’t run a bank, it means that I’ll only have funds for one, or if I’m lucky, at most two trips budgeted for this year, provided that I really, really save up. No money, no go. So I’ll only go if I get to see/hear him sing at a concert or a fan-meeting, provided I get the ticket beforehand. And I’ll go only if I understand the language the country is using.

After much painfully rational thought and calculation, Seoul this weekend is out (argh!!!). And so is JKS’ album showcase in Tokyo on 27 Mar, for which I have been doing some research too. I shouldn’t be paying for a chance to catch a glimpse of him from a far distance away in a crowd of 20,000 …..

So ends Travel Bug Part 1, quite abruptly because I need to go get my precious 5 hours of sleep to sustain me through the next working day. But it hints at more parts to go, as I’m sure that the Bug will bite again, after all JKS has also said that he’s planning more fan-meetings this year, in Japan though (I think), and with his new album, perhaps more promotional (concert!) tours. Till the next bite, and good night!