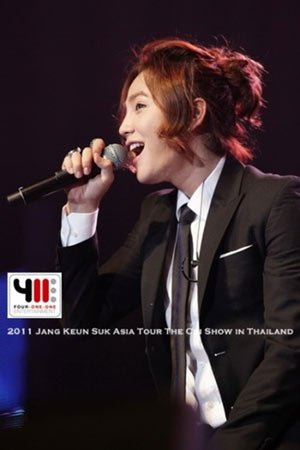 Tengxun Entertainment (1 June 2011, 00:06 hours) – Korean star Jang Keun Suk’s television drama “You are Beautiful” set the record in Japan for being the Korean drama with the highest number of repeat broadcasts, and the excellent sales of debut single “Let me cry” released on 27 April ignited his soaring popularity in Japan. JKS has become a hot focus of interviews for the competing mass media. Two Japanese magazines released on 31 May, Woman’s Weekly and Woman Herself (rough translation), have made JKS their cover model, and in an interview by Woman Herself, JKS unwittingly reveals that he has a “girlfriend”.

“Last year after the filming of ‘Marry me Mary’, I only rested for around 10 days. From then to now, I have not yet taken a break.” During the interview, JKS said that his schedule was so packed that he had no time to rest. “My girlfriend … is a Japanese …. Kidding!” His sudden revelation gave the reporter a shock! JKS also revealed that he had been chased by a primary school fan while he was shopping in Shibuya on a previous trip.

Recently, JKS is busy with the filming of movie “You’re my Pet” (YMP), and also with his fan-meetings in Thailand, China, Taiwan and Shanghai. On 31 May, Korean media reported that on 30 May at a café, JKS had a confidential meeting with renowned Korean drama director Yoon Seok-ho who has the intention of inviting JKS to act in KBS2’s new drama “Our Happy Days of Youth” (tentative title) to be aired in September 2011, which will be a similar pure romance story like the movie “The Classic”. TOP of Big Bang was reportedly the strongest candidate for the male lead of KBS2’s new drama, but he could not due to conflicting schedule.

According to a source, including YMP filming and overseas events, JKS’ schedule is full until August, but Yoon Seok-ho was very keen to contact JKS, hence the possibility of their collaboration being realized is pretty high. The new drama will be filmed in Japan in the initial stage, and there are plans to have a Hallyu star as the male lead. The producers are eyeing JKS due to his recent immense popularity in Japan. If JKS agrees to this drama, it will attract advance investment funds of US$150,000 for each episode. Just this factor alone makes the producer feel assured and not worried about making a loss. Japanese investors have expressed that compared to Hyun Bin, they prefer JKS as male lead. Recently, many television dramas have JKS as their first choice for male lead and hope that he can act in their drama. JKS’ popularity in Japan nowadays is almost surpassing the “Hallyu pioneer” Bae Yong-joon. JKS can attract big amounts of Japanese investment, so it is natural for many major productions to compete for him. After all, the Japanese market is an enticing factor.

Here is a look at Yoon Seok-ho’s works:

From this list, we see that out of the four Hallyu “heavenly Kings” Jang Dong Gun, Lee Byung Hun, Sung Seung Heon and Hyun Bin, three have acted in Director Yoon’s dramas, and also Bae Yong Joon later in “Winter Sonata”. These are testament to Yoon’s status in the Hallyu entertainment scene. But undeniably, the dramas after “Winter Sonata” such as “Summer Scent” and “Spring Waltz” did not receive as much success in terms of ratings and reviews. Some mass media comments that if Jang Keun Suk takes on a role in the proposed drama, it is hard to guarantee his future success, firstly because Director Yoon’s style of tragic and innocent love is more suited for reminiscing and no longer the main theme of modern Korean dramas, and secondly, although “You’re Beautiful” (YAB) received overwhelming response in Asia, it is a fact that YAB was not widely accepted by the Korean audience. Including “Do Re Mi Fa So La Ti Do” and his latest work “Marry me Mary”, JKS is always hovering on the edge of “idolized roles”, which does not always bode well for a long-term acting career as such characters easily give people a sense of repetition and lack of break-through.

Although JKS is leading in Japan in terms of his popularity, it is undeniably the truth that as an actor, JKS still does not have any representative work to date. A collaboration with Yoon Seok-ho will definitely be cause for much attention, but after all the hubbub, whether this turns out to be a blessing or a bubble is up to the judgment of the audience.

38 thoughts on “[News] JKS being chased by fans when shopping in Tokyo, reveals girlfriend is Japanese”