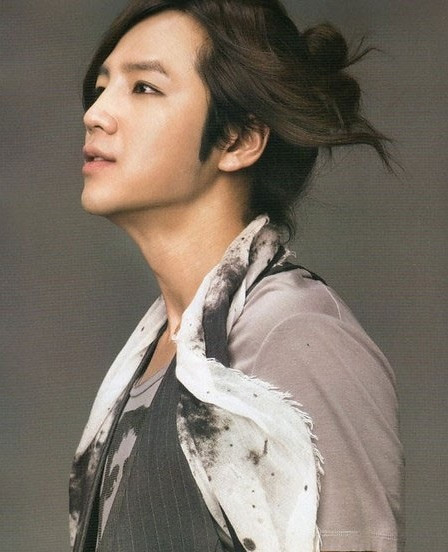 13 May 2011 – Korean star Jang Keun Suk’s debut single “Let me cry” topped the Oricon weekly sales chart upon its release, making JKS the only overseas artiste to achieve this feat in history. The splendid results from his first entry onto the Japanese music scene has served to increase his reputation accumulated from “You are Beautiful” (YAB), as well as made the Korean media look at JKS in a new light and start to analyze the reasons for the “Jang Keun Suk” effect in Japan.

Japan Fuji TV’s star programme “Hey! Hey! Hey!” had an interview with JKS and to increase viewership, the interview was spread out over 2 weeks. Their afternoon drama slot is currently airing YAB for the third time, becoming the overseas drama with the most number of repeat broadcasts. TBS will air “Marry me Mary” from 20 May, another drama starring JKS. A strong competitor to Fuji and TBS, Japan TV is not lagging behind – “Sukkiri”, its morning general news programme, aired a special 19-minute feature “New Hallyu IKEMAN Jang Keun Suk” on 12 May, analyzing the reasons why 23 year old JKS has become Japan’s brightest Hallyu star. “Sukkiri” points out that besides the two known external reasons of JKS’ acting skill being honed since his high school days and his singing prowess, Jang Keun Suk’s gender-neutral sexiness and his consideration and sincerity towards fans and fellow workers are his internal characteristics that account for his gradual transition to the ranks of Hallyu superstars.

Just walk into any bookstore in Tokyo, in the Korean section, more than half the magazines have JKS on the cover. After JKS-endorsed Suntory makkori commercial aired on major TV stations in Japan, Suntory sales for the past 2 months have jumped, selling around 7,000,000 bottles.

“AN AN”, the Japanese magazine most popular among Japanese young women, initially only decided to do an interview with JKS for one issue, but after the chief editor saw JKS’ excellent photos at the set, she could not bear to just insert the photos as part of the interview, so she made the risky decision to put JKS on the cover page, with his photos and interview as a main selling point. Never did the magazine think that their sales for that issue was 30% more than usual (280,000 copies). “AN AN” editor expressed that despite this issue being released only 2 weeks after Japan’s big earthquake and the whole of Japan was in a self-restrictive mood, sales was not only unaffected but in fact better. The editor pointed out JKS’ unique characteristic: his gender-neutral sexiness which was different from the previous, main-stream male Hallyu stars who emphasized on masculinity. And JKS is only 23 years old; in future, he has many more charms yet to be discovered.

GAM magazine prepared a special JKS-devoted magazine “Cri-J” with 4 issues over a year. GAM editor said during an interview , “Since the second half of last year, all the news on JKS received much attention. At that time, we felt that he would become extremely popular soon, so we planned this special magazine for him.” She revealed that GAM has two other magazines introducing other big-shot Hallyu stars and general Korean entertainment news, but Cri-J’s sales volume is about 5 times more.

“Sukkiri” interviewed manager Kim Byung Gun who has supported JKS for more than 6 years. Kim says that it is very hard to define JKS’ charm. “His charm lies in his unpredictability. JKS has domestic pastimes such as reading and cooking. He also enjoys the usual guys’ activities such as driving. Not only is JKS considerate towards his fans, he also takes care of his fellow workers. “Sukkiri” points out that JKS’ agent company only has one artiste, which is JKS himself. It is a “family-style” company that is not big, but JKS treats all workers nicely. Manager Kim reveals that once, the workers were working late in the company and “JKS brought food that he personally cooked to thank them for working late, which made everyone feel very touched.”

Interestingly, a new name was brought out by “Sukkiri” programme – Keun-yang. The media rarely uses this honorific way of addressing someone in Japan (usually reserved for big-shot stars like Bae Yong-joon), which indicates that JKS has been included in the ranks of popular Hallyu stars. But fans complained that it sounds awkward; after all, JKS is young, and adding “yang” after his name loses a sense of friendliness.

A few secrets of JKS were also revealed in “Sukkiri”, such as the Japanese actors that JKS admires most are Takuya Kimura and Jo Odagiri, the director he admires most is Takeshi Kitano. A Korean reporter also reveals that JKS’ nickname in Korea is 조노인 jou-nou-in* (which means a young oldish man, being too mature for his age), because although he is only aged 23, he started in showbiz since 5 years old and thus he is more mature than his peers and always so considerate towards people around him.

In Jan this year, JKS was filming the MV for Every Little Thing (JKS’ big fan Kaori Mochida had flown personally to Korea to invite JKS to participate in the MV). At that time, all the workers including Kaori Mochida were feeling very tired because of the tight schedule and the atmosphere was quite down, JKS suddenly said to Kaori, “Mochida-san, actually, I like biscuits very much.” (The pronunciation of ‘biscuit’ in Japanese is the same as the word 持in Mochida’s name). Everyone present burst out laughing at JKS’ attempt to joke. The programme host complimented JKS on being able to say this kind of similar-pronunciation joke which even Japanese may not think of, and that JKS indeed has the potential to become Keun-yang.

If saying that JKS is the first overseas artiste to create the record of being number 1 on Oricon chart in his debut single’s first week of sale is still not enough to understand the situation, another way of realizing the aggressive momemtum of JKS’ development in Japan is that even including Japanese singers, JKS is the only one in 30 years after Kondō Masahiko to achieve this feat. Of course, everything is double-edged. Such a high-level starting point will definitely increase the stress on JKS – the expectations for the box office results of movie “You’re my Pet” and the sales for JKS’ next single will be much higher. As what the Korean media have commented, whether JKS is a Hallyu superstar or meteor (i.e. flashes out of sight fast), only time will tell.

* Translator’s note: I may have gotten the Korean nickname wrong but the meaning is there.