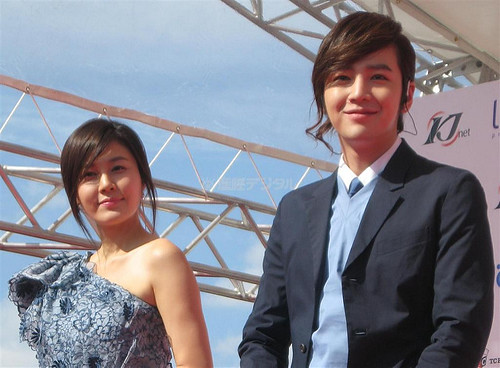 “If one can get Jang Keun Suk to be on a magazine cover, the sales will definitely not be a problem,” a Japanese publishing source revealed.

Jang Keun Suk may very well outstrip the current Hallyu “leader” Bae Yong-joon. His debut single “Let me cry” topped the Oricon chart upon its first release – its sales of 119,000 is equivalent to the total annual sales record of a first-rated singer in Korea. On 11 May, many Korean media touched on the topic of “Why Jang Keun Suk can become so popular in Japan”, and analyzed the reasons why he became a top Hallyu star.

Korean media points out that in contrast to JKS’ deeply-rooted actor identity in Korea, JKS’ acting and singing skill are both widely acknowledged in Japan. Many Korean artistes sing at fan-meetings in order to broaden their artiste activities in Japan, but this time, the sales record of JKS’ debut single remains an undisputable fact which proves that his “musician” identity is officially acknowledged. Oricon’s editor even complimented JKS that “his period has arrived”. JKS was the historical first overseas singer to top Oricon’s weekly sales chart in its first week of sales (including groups and solo singers), and the media analyzed that the reason why JKS was able to achieve this feat as a newbie singer, was related to the singer roles that JKS took on in “You are Beautiful” and “Marry me Mary”, as well as his outstanding performance in singing the drama OST. They think that JKS’ singer image slowly took shape in the hearts of fans through these dramas, so even though his album release was delayed for more than a month because of the earthquake, he could still accomplish these ‘miraculous’ sales, finally leading to the official debut of singer Jang Keun Suk.

The effect of “You are Beautiful”: overseas drama with the most number of repeat broadcasts on free-to-air TV station

JKS’ overwhelming popularity in Japan can also be seen from his “You are Beautiful” (YAB). Fuji TV recently announced its third broadcast of YAB on 28 May, YAB thus becoming the first overseas drama being repeated the most. This is due to JKS’ high popularity. In addition, between 6 May to 19 May, 53 cinemas in Japan are showing YAB 2-hour movie version. At JKS’ fan-meeting in Yokohama end of last year, the demand for tickets out-stripped supply, so his fan-meeting was broadcast live via satellite at 31 cinemas across Japan, an unprecedented way to satisfy fans’ desire to watch his show.

Korean media points out that before the news of JKS’ album topping the Oricon chart was announced, both the Korean and Japanese media were not enthusiastic about reports on JKS, because he still belongs to the younger generation of still-rising artistes, and JKS is not yet on par with big stars such as Bae Yong-joon, Song Seung Heon and Hyun Bin. Despite this lack of attention, JKS continues to work hard to hone his acting and singing. Every time when he holds his fan-meeting, be it in Korea or other countries such as Japan, one always sees JKS’ sincerity and consideration towards fans. The most important reason why JKS can win fans’ hearts is that he possesses Japan’s top star model etiquette.

Japan’s fascination with Korean girl groups is widely known, and on Oricon chart on 9 May when JKS surpassed top-rated Girls Generation to become the weekly champion, even many Korean fans were in for a big surprise. Not only is he the first overseas artiste to top the Oricon chart on his first release, JKS is also the first artiste (including Japanese singers) to achieve this feat in 30 years since Kondō Masahiko.

In contrast to the craze in Japan, it is also a fact that JKS is not counted amongst the ranks of top stars in Korea. His acting in “Hwang Jin-I” received some initial acknowledgement, but viewership ratings for his most recent drama “Marry me Mary” fell below the embarrassing 10% threshold. His works such as “Happy Life”, “Baby and Me” and “The Case of Itaewon Homicide” were average in terms of reviews and viewership.

Korean media analyzes bluntly that even the viewership ratings for his representative work “YAB” were poor in Korea. JKS’ popularity increase in Japan is similar to Bae Yong-joon’s, in that his drama became popular and topped ratings in Japan when Fuji TV aired it. If Bae Yong-joon can be said to have the love of middle-aged audience due to his sense of gentility rarely seen in Japanese male artistes, then JKS wins fans (including younger fans) due to his new-generation individuality and gender-neutral charm. This is similar to the reasons why K-pop became popular.

In the wake of Bae Yong-joon, many Korean artistes have also developed their career in Japan, but the only Hallyu star who has gotten all the Japanese media singing his praises is possibly only Jang Keun Suk. JKS on the cover of anan magazine sold a record 280,000 copies to the extent of no stock. “Oricon Style” editor even says that “JKS period has arrived”, and news describe JKS’ popularity as the aggressiveness of a hurricane.

The movie “You’re my Pet” is JKS’ first commercial work after joining the ranks of Hallyu star.

“Whether JKS’ popularity is the over-enthusiastic promotion of the media or a real fact, the ticket sales of this movie will prove to be the test of his talent and popularity.”