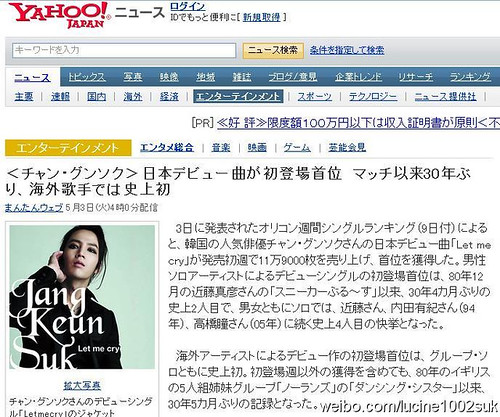 Today I received a big news about JKS’s accomplishment.
JKS’s debut album”Let me cry” was the bestseller last week. And he is the first and only foreign artist who made the largest number of weekly sales as one’s “debut” album!!!! It means that JKS made a Japanese music history!! Further, even including Japanese male artists, this feat is for the first time in 30 years!

I’m really happy to hear the news and I’m sure JKS is also happy to hear it. He and we Japanese eels had to give up his showcase where he planned to unveil his debut songs because of a big disaster occured in Japan. But many eels were waiting for the time we could listen to his songs. I’m full of happiness and I want to share this with not only Japanese eels but all eels in the world.

Yes!! Congratulations to Jang Keun Suk!
That’s an amazing achievement! Not only is it due to the efforts made by JKS’ team, the quality of the album and his own talent, it is also largely due to all the support from eels worldwide, who rushed to the Japanese website too to buy his albums 🙂 Together, we have made this happen!!

It is really sad that his Tokyo Showcase had to be cancelled (I was very tempted to go to his Showcase too! Haha! I’m forever tempted!!) Hopefully, he’ll be able to organise another Showcase or fan-meetings in Japan soon ^^