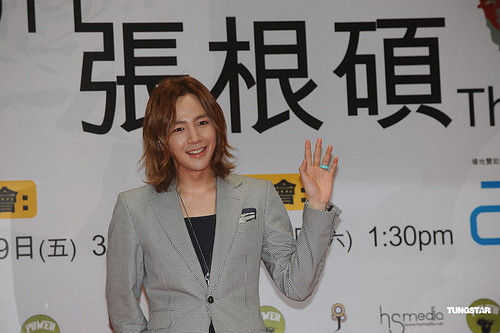 Hong Kong news, 30 April – Korean star Jang Keun Suk is in Hong Kong recently to prepare for his “2011 Jang Keun Suk The Cri Show HK” to be held tonight. Yesterday, JKS appeared at Kwun Tong for promotion and attracted 800 fans who were there to catch a glimpse of their idol. JKS was very friendly, smiling and waving at fans and blowing them kisses, which made fans scream. During the ice-breaking ceremony, he was mischievous and smashed the ice to bits.

“2011 Jang Keun Suk The Cri Show HK” will be held tonight at Hong Kong International Trade and Conventional Centre. JKS was in Hong Kong two days ago for preparation and promotion, and attended the press conference yesterday at apm Kwun Tong, which attracted 800 fans in support of their idol. In a gray suit and with his hair dyed gold, screams erupted the moment Jang Keun Suk appeared. He greeted fans in Cantonese and also waved at fans on the second and third floor. 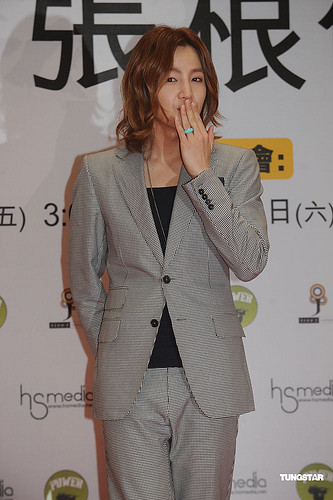 The organisers arranged an ice-breaking ceremony for JKS and his agent company to signify his entry to the Chinese market. At first, JKS hit the ice gently and nothing happened. The next second, the ‘A’ in “Asia” fell over and gave him a little scare. It then evoked his playfulness and he hit the other letters off to the floor, even including small bits of ice and thus successfully concluding the ceremony. When he received the new iPad2 given by his company’s senior management, JKS cried out in surprise. Fans prepared a cake for JKS, who executed the same pose as his mini-figurine on the cake for the media to take photographs. In addition, JKS secretly put a letter from the cake into his mouth but maybe because it did not taste nice, so he put it back on the cake again after two licks. It was quite funny. Fans had also contributed HK$15,000 to Red Cross, which made him very touched. 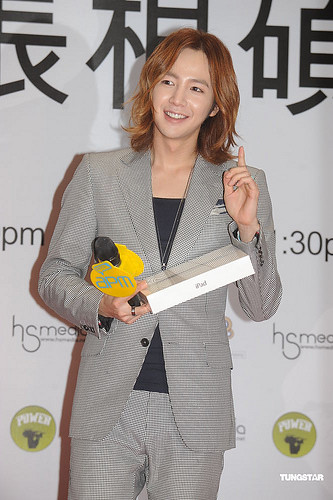 This is JKS’ third time to Hong Kong. He said that last year, due to fans’ extreme enthusiasm, he could only stay in the hotel and not go out sight-seeing, so he hopes that he can see Hong Kong’s night scenery. But he has already had a taste of his favourite dishes. In mid-April, he had officially signed an exclusive contract with HS Media and on Wed 27 April, he has released his single album “Let me cry” which sold 16,000 copies on its first day and surpassed Girls Generation’s new album to top Oricon sales chart that day. JKS said, “Very happy about the good results, and thanks very much to fans’ support. I hope to have more development in the Greater China region.”

The transformation from an actor to a singer has made JKS feel excited and nervous. He feels that being a singer is a big challenge. When asked what message he has for Hong Kong fans, JKS said with a laugh that he always received much warm support from fans when he comes to Hong Kong, and he feels excited when he hears fans call his name. JKS said that tonight is not only a fans meeting, and there will be many special performances but he refuses to divulge more. Fans will have to come for the performance to find out. He will also sing his new song “Let me cry”. The entire press conference lasted 20 minutes and before JKS left, he told fans in English, “Bye bye, see you tomorrow.”