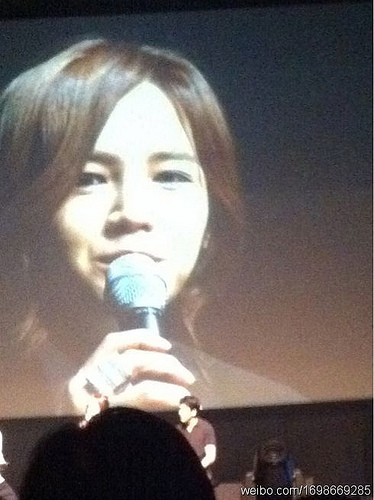 The Show started with “Let me cry” (yay!), but unfortunately, the loud music drowned out his voice at some parts. The next song “Take care, my bus” was definitely much better in terms of the balance between music volume and his voice clarity. These 2 songs gave the FM a rather good start as everyone was feeling high, and some batches of fans stood up to dance and sway along to the music. And of course, at this point, here come the famous Singapore crowd dampeners (no, not the police…) – the concert ushers/security, who had to rush up and down the aisles to get fans to sit down so as not to block the view of others behind. Can you imagine sitting down during 2 rock songs?? Ok, so after some time, these people sat down.

Then came the interview segment. The most memorable part was that the audience was treated to a preview of photographs from JKS’ first official Jplus photo-book. Trust me, the selection of photographs shown is simply delectable – I am definitely getting it (will wait for the international version or for YesAsia to release though). JKS talked a little about what happened behind each pic or the concept the pic is based on. Unfortunately, erm, I don’t remember specifically what he said! Ah yes, I recall one pic in London where he had a pic taken with a team of tall, burly London firemen. That was not in the plans, but something that just cropped up. JKS said he was a bit scared of the firemen, but they agreed to a photo. Some of the pics were taken spontaneously, but the conclusion is that JKS looks great in every single picture!!!

The Cri Show was also divided into two parts: the first part showing JKS’ recent and representative works as an actor, and the second part showing the night-life side of JKS (yes! What we have been waiting for – Lounge H!)

As the Cri Show went into the first part, the first thing was that we got to see scenes from the drama “Marry me Mary” (M3) on the big screen. The scenes played for a few minutes or so while JKS was changing clothes, then JKS re-appeared as Kang Mu-gyul. He sang 2 songs (forgot the order). When he sang the first few bars of his M3 favourite “My Precious”, I thought there was something wrong with the sound system because I heard an overlay of voices, so the singing was not clear. Then JKS stopped singing, and the singing voice continued!! JKS was lip-syncing for that first few bars! I think the audience was baffled for a while as to what was happening, until JKS said something and I got the idea that he was playing a little joke on us. Then he asked, do we want to hear him sing the song live? The answer – YES!!! So he signalled for the music to begin again, and this time, JKS sang “My Precious” unplugged! Wonderful singing from JKS, considering his cold – there were a few slight imperfections but that did not mar the song or the performance.

Then JKS sang “Hello Hello”. It started off with the slow version, and after a few bars, JKS stopped again and said that was not what he wanted. He said something in English that we couldn’t catch, and he repeated that in Singapore, it was always summer, so was it cool or hot? We shouted “Hot”! And he said, since it’s hot summer, shouldn’t we be dancing? Stand up and dance! At his given instruction, all of us jumped up gleefully (while the security looked on haplessly…. Haha~!), and we danced to the fast, upbeat version of “Hello Hello”. The atmosphere was high, everyone was dancing and enjoying the song! Yes, this is what JKS’ concert should be like! Who ever saw the audience sitting down during Kang Mu-gyul’s rock concerts in “Marry me Mary”?

After the high song, it was interview time again, and the emcee Ah Dong (same as the one at Marina Square autograph session) asked JKS a few questions related to “Marry me Mary”, such as whether there were any amusing incidents during filming. JKS mentioned that he was (always? sometimes?) drunk during filming. Ah Dong also asked how JKS felt working with Moon Geun Young (MGY) who was the same age as him. JKS replied they are good friends and just before he came for the Singapore Cri Show, he had a telephone conversation with MGY and they had agreed to meet up for drinks sometime in the near future. Another question was which character (Kang Mu-gyul or Hwang Tae-kyung) was closer to JKS’ own character, and JKS said that Kang Mu-gyul’s (KMG) character was closer to his, as KMG likes music, likes to drink and likes girls. Then JKS corrected the last part and said something like he’s not such a playboy like KMG.

Still at the first part (Acting), the next segment showed scenes from “You are Beautiful” (YAB). While the scenes played on and on (again I assume to allow some time for JKS to change clothes), I was thinking, the drama review was really taking too much time. I mean, I was there to see JKS in person, not to watch such a long review of the scenes from the drama which I could have watched at home. Also between each segment and the next, there would be a break. The music would stop, everything would be dark, then we had to wait a few seconds for the next segment to begin. These “breaks” happened almost every time between one segment and the next segment, and to me, that was not the sign of a show that runs smoothly.

After that, JKS appeared in the clothes and hairstyle of Hwang Tae-kyung (everyone screamed. Now there was a lot of screaming from fans, so even in places where I didn’t mention screaming, please insert screams from fans ^^ ). Then it was the interaction time with fans. Before we entered the hall, everyone attending the Show could write their name and identity card/passport number onto a slip of paper which was dropped into a lucky draw box, where JKS would pick out 3 slips of paper and ask the lucky or “unlucky” person a question about the drama “You are Beautiful”. If answered correctly, the person would get a prize. Here are the questions I remember:

How old was Hwang Tae-kyung (HTK)?
What was the occupation of HTK’s father?
What was the colour of HTK’s mobile phone?
What song did HTK sing to Go Mi-nam at their one-to-one fan-meeting?
What special skill did HTK perform during a variety programme in the drama?
(eating radish … eating? Nibbling? Shaving raddish?? We know the action, but what word are they looking for?)

I cannot remember the answers to any of the questions, at which point Staying Up Late told me jokingly to go back and re-watch YAB, how can I call myself a fan when I cannot answer? …. Well, let’s just say my memory has never been good ^^

If I remember correctly, JKS also sang “I will promise you” from YAB?
The climax of the Cri Show is definitely Lounge H, with Big Brother Kurt as well. 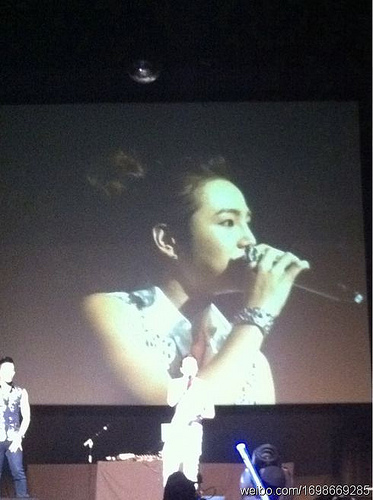 Both of them, especially JKS, can really make the audience feel very high. They sang “Gotta Get Cha”, “Shake it” and a couple of other songs whose titles I’m not sure of. We were all dancing throughout! It was very high and very enjoyable!! And this is coming from me, someone who does not and cannot dance and when forced to dance, can do a very stiff dance. But Jang Keun Suk! His energy on stage is amazing! And we love his dancing!!!

During one of the Lounge H songs, JKS as usual went to pull his manager Kim on-stage to participate in the dancing. Kim must be getting quite used to this by now ^^ He moved his body a bit but did not really dance. Then as he moved off-stage, we saw him taking out his mobile phone and answering a call! Funny! He’s truly a manager! Then JKS went to pull Jason Jang, CEO of HS Media, on the stage as well. The, er, cute and comic Jason was quite sporty, and he dared to dance his own dance, just swinging his arms around and er, frankly speaking, he looked like a panda dancing! Which means he’s quite cute! Haha~! Jason continued dancing his cute panda dance until JKS lifted his leg high and pretended to kick Jason off-stage! Really funny! Seriously though, to see JKS’ work partners like Jason join him in a dance on-stage just testifies to their strong relationship as partners and as friends.

And on this high note, Singapore Cri Show 2011 came to an end. The audience lingered around and did not want to leave. We kept shouting “Jang Keun Suk” and “Encore”! In the end, the emcee Ah Dong had to come out and tell us that this was the end of the show. He added that he had been through rehearsals with JKS during these 2 days, and despite his cold, JKS had gone through a whole day of fan-meeting rehearsals with his usual dedicated professionalism, and Ah Dong led the audience to shout “Khamsahamida” and a few other cheers to JKS.

This is the end of Singapore Cri Show 2011, but it is the start of JKS Asia Tour.

I am going to print this post for JKS and go and wait at his hotel on Sunday, 24 April. I hope I get to pass this fan account to him, and maybe he’ll find time to read a fan’s perspective of the Singapore stop of his Asia Tour.

Lastly, I want to say to Jang Keun Suk, you are fantastic! We love you so much!!

This is the lightboard that I made for you ^^ 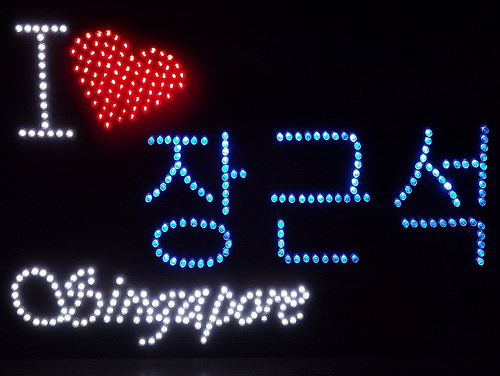 And also to my friends Rongling, Staying Up Late, Sophie, the fan-meeting would not be half as fun without your company! We are already looking forward to JKS’ next performance! 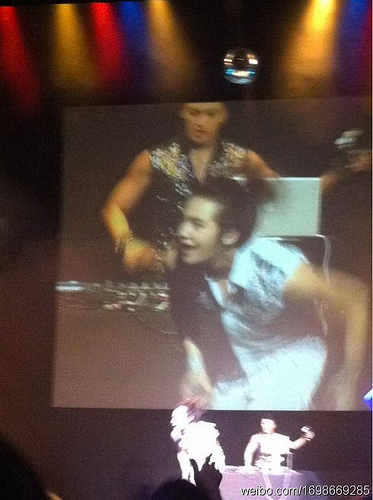