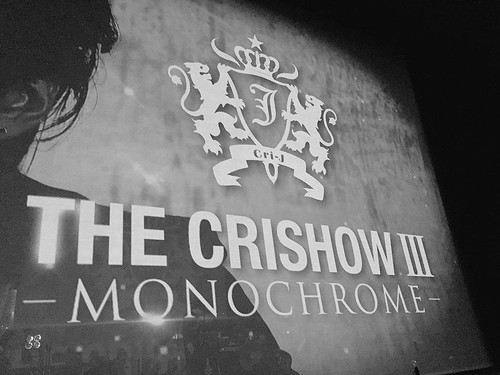 This is my first FA, no idea where to start as I am writing this in the Shinkansen. Considering I have attended a few TH shows and the Seoul Propose FM, nothing beats this show experience because this is his solo stage, singer Jang in his fullest glory.

I was lucky to be seated at the 6th row, which means I can see his face quite clearly. To the right of me were 3 friendly enthusiastic blue eels, to the left were 3…..very passive eels. They didn’t show much emotions nor wave the fanlight and I was thinking why!?! Talk about mood spoiler.. Ppl seating in the front line should show their enthusiasm and support as much as possible for Suk to see. Nevertheless thanks to them I managed to get the streamers ( as they didn’t want it, they just put it on the floor..-.-) and shared them with the other blue eels who didn’t beside me.

The show started with a translucent veil screen, and we can see Suk and band behind the screen illuminated by stage light. There were some sort of projections of Suk in various angles on the veil screen, very beautiful, very analog. (As compared to fancy led). He was sitting on the bench singing the opening song, wearing jeans, fitted t-shirt inside a long sweater coat, with center parted slight wavy hair. The veil screen will drop later to reveal full stage, and when he stood up later it dawned on me what a clotheshorse Suk is! Even with such a simple attire he looked like he is suited for the model runway as he looked so good! No sight of ponyo belly behind that tight fitted t and the cloak showed off his very broad shoulders. And I have always loved him in jeans. The second attire he changed to a black jacket cloak with gold trimmings to compliment the faster songs, he also wore a sleeveless top with torn jeans and lastly for encore the Monochrome t-shirt. All simple but very stylish (because he is the one who wore it) attire. The highlight will be his toned arms displayed through the sleeveless top and the little pig tail as he bunched and tied up the hair at the back of his head.

Appearance wise, he is looking perfect and for vocals, I think he did very well considering this is his first hall show. He really sang many songs, though some are not full songs but a medley. Remembering lyrics is hard so Suk is really really intelligent to be able to remember so much lyrics! There were a couple of new arrangements for songs like Save me and Turn off, so it is a different feel when you listened to it. The band was the same as the one from Zepp tour, with a couple of new faces but it is s great band.

For fast songs, he was moving his body in tune to tempo (I don’t know how to describe this “带动感”, which I find so sexy. And for slow songs he just sat there and sing with eyes closed. The song that I remembered most vividly is Kaze (風; wind). He sang it sitting down with the veil screen again, inside a birdcage projection. And as the song goes and reaches climax, the birdcage visual was blown to pieces. I wonder the meaning behind this scene but I am taking the message of constraint and breaking free. How powerful this song performance is T.T!

There were also other stage presentation like descending light lanterns and other screen effects which I can’t describe, you will have to see it to experience – please buy the DVD. No doubt it was a small venue with simple stage, but the effects are really compelling and drawn you into his world. And of course you would have already heard of encore song when he sang hidamari and sitting on a suspended white boat. I would say for those sitting in the centre or the back of the venue would be able to appreciate the full extend of the stage and visuals, as sitting in the front we can’t really see the projections clearly. With regards to my close encounter with me, I saw him twice within 2 arms length reach when he went into the audience and 2nd time on the aisle beside the stage. He really look like a doll! Perfect features. I think this will be my most memorable show ever as I have been touched by his music and soul ❤