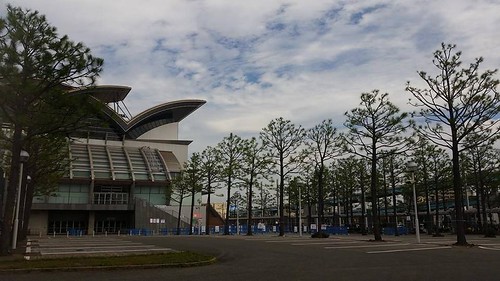 Thank God!! 2 days Team H shows in Fukuoka ended successfully and beautifully, thanks to all eels sis here for your praying too. We were super lucky this time as our seats was superb for both days.

My first day was standing and I was shocked and heart beating fast when I got to know that I was at the first row and my side was facing the fountain where he will dance Raining on the Dance Floor. Before he appeared on stage I guessed he will just come out from the middle of stage but I’m nearly stop breathing coz he appeared right in front of my side wearing the black suit he wore in the “Raining on the dance floor” MV. So good looking ❤︎❤︎❤︎… the atmosphere was so high as he continue to dance and sing and jump! The funniest part for the first day team H was dancing with 2 grannies. We especially like the acoustic version of Driving To The Highway, we enjoyed so much listening both of them sit back and relax while singing.

Second day we were sitting and I don’t expect much since we are on flat floor. But to our surprised we are on 2nd row and near the stage too. Sitting next to me was a young boy accompanied his grandma. He was so cool looking and fall asleep while waiting the show to start. Before the show start, his grandma purposely go out and bought a pair of light sticks so that both of them can wear, such a sweet and cute grandma. Shows starts and and and and OMG!! I saw him appeared with little ponytail and with red suits where there was seconds that I thought I was in his last year Team H!!! I forgot whether I did blink my eyes after seeing his looks ❤︎❤︎❤︎….. we were lucky as he came down few times to our side!! I was shoot by his dry ice gun….kkkk happily shoot by him and still would like to ask for more….I guessed the young boy next to me quite enjoy with team h show as I can see him smiling when Suk talking and do claps together and I really so respect his grandma coz she mostly stands throughout the show. He came to the stage extension at our side and lying on the floor while singing ❤︎❤︎….the grandma that been selected to go up the stage on the first night was there too and Suk saying hello to her…and the most unbelievable moments that happened to me was he really so near to my side that I able to touch him on his biceps (but he wearing long sleeves), and I can feel his arm is firm 😀 😀 !! I never expected to touch him coz I know he doesn’t like to be touched but our distance too near that i can easily touched him, I just hope to shake his hand….I think that moment of touching him, I can’t remember whether I did breathe ❤︎❤︎ !! My first time ever!!! Now I still feel happy, excited, blessed, unbelievable and satisfied.

Thanks to both Suk and BB for giving us another wonderful Team H memories!! And I’m sure he will bring more surprises to Team H in Saitama and Osaka!! Zikzin…