UPDATE: added the song lost at ‘ZIKZIN MAN in Shanghai’

Jang Keun Suk Was His Shanghai Show’s Own MC, He Read a Long Love Letter All in Chinese Touched Thousands Fans’ Heart 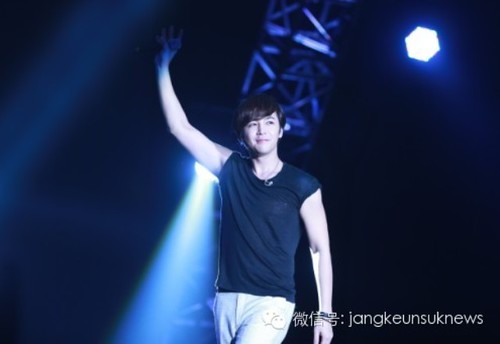 Asia Prince Jang Keun on August 31, in Shanghai Big Stage opened his “2014 Zikzin Man Unstoppable” China Tour’s first stop. This time Jang Keun Suk combined fan meeting and small scale concert together. He performed some his classic songs in live. Also with his humor as MC to do a talk show. Fans on site were all screaming and showing their support to him. Next stop will be on Sept 27 in Guangzhou Stadium. So fans in Guangzhou please come to the show to have romantic date with him, promise?

This time, Jang Keun Suk changed style from high Party to show his tenderness. He brought band from Korea to play live music and sang his classic love songs, made a beautiful romantic atmosphere. He not only used lots of thoughts to make a song list which has special meaning, every single words he sang he showed his heart. He also specially prepared a long love letter in Chinese he read in his not smooth pronunciation but full of this grateful feeling to his fans for their long time support. This gave a big surprise to fans, warmed and touched their hearts.

3 thoughts on “[article] Jang Keun Suk Was His Shanghai Show’s Own MC, He Read a Long Love Letter All in Chinese Touched Thousands Fans’ Heart_20140901”