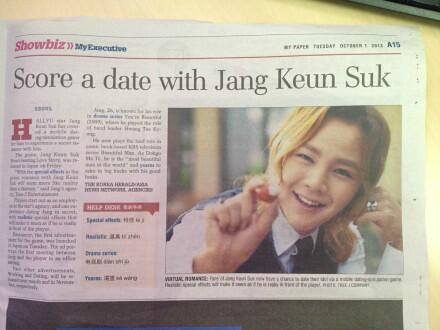 HALLYU star Jang Keun Suk has created a mobile dating-simulation game for fans to experience a secret romance with him.
The game, Jang Keun Suk Heart-beating Love Story, was released in Japan on Friday.

“With the special effects in the game, romance with Jang Keun Suk will seem more like reality than a fantasy,” said Jang’s agency, Tree J Entertainment.
Players start out as an employee at the star’s agency, and can experience dating Jang in secret, with realistic special effects that will make it seem as if he is really in front of the player.
Encounter, the first advertisement for the game, was launched in Japan on Tuesday. The ad portrays the first meeting between Jang and the player in an office setting.
Two other advertisements, Working and Dating, will be released next month and in November, respectively.
Jang, 26, is known for his role in drama series You’re Beautiful (2009), where he played the role of band leader Hwang Tae Kyung.
He now plays the lead role in comic book-based KBS television series Beautiful Man. As Dokgo Ma Te, he is the “most beautiful man in the world” and yearns to rake in big bucks with his good looks.