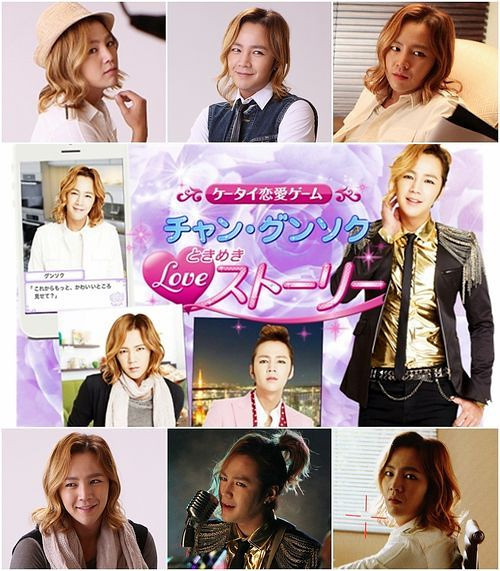 Today according to Jang’s agency company Tree J, the simulation game for mobile phone “Jang Keun Suk Tokimeki Love Story” which let fans can fully enjoy “love relationship” with Jang Keun Suk has been released on Sept 20th. The game became to a hot topic, the CM of this game will be released today all over Japan.

Jang Keun Suk is the FIRST Korean actor whose mobile phone game TV-CM released in all Japan, this proved his Asia Prince Charm.

In “Jang Keun Suk Tokimeki Love Story” game, you can “work” in Jang Keun Suk’s producing company as an employee and develop a sweet and spicy “secret love relationship” with “Geunjang”.

With the camera, you can be in the same room with Jang Keun Suk. This game has magic effect that made the “love story” not as a fantasy but more like a real one. The game is expecting to cause a big sensation for the fans who fancy to have a “dangerous love relationship” with Jang Keun Suk.

“Jang Keun Suk Tokimeki Love Story” CM has Meeting, Business and Dating 3 chapters, they will be aired in Sept, Oct and Nov. Today will release the first one “Meeting”. The meeting will happen first in Jang Keun Suk’s office, this will make many female fans have a fast heart beats.

During the actual shooting Jang Keun Suk not only said the words from the script but also spontaneously added many personal sweet and spicy acting in it made CM more real, even the staff were laughing hard behind camera. Thanks to Jang Keun Suk, until the end the shooting was in a relaxed and happy atmosphere. So today’s CM disclosure will draw lots of attention.

Jang Keun Suk will act in KBS new drama “Beautiful Man” plays Dogo Mate, this is actor Jang after “Love Rain” over a year come back to TV screen to act.