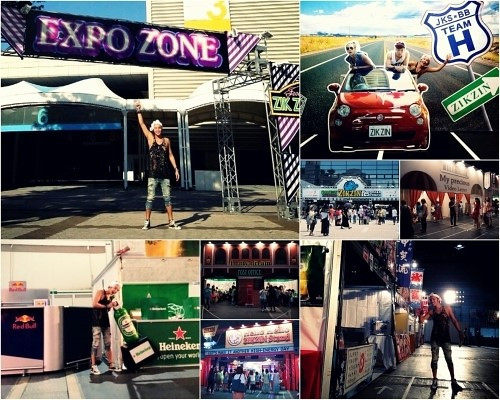 “Zikzin Fes” is an Expo which is themed with Jang Keun Suk originated brand “Zikzin”. Jang Keun Suk has the idea of this big Expo 3 years ago, even though the people around him was worried but he still made the Expo happen and held it successfully. The Expo comes with Jang Keun Suk and Team H’s performances, also has many Jang Keun Suk themed stands. which attracted many people to come.

Jang Keun Suk performed solo and also as “Team H” with BB on stage. Two perfect shows in one day. This has shown his super energy.

Also, in the venue, there are Zikzin Communities, Zikzin Street, stands themed with Jang Keun Suk’s songs. Also such as selling nail stickers from Zikzin Shop in Shibuya, photo zone, theaters, also you can write a message at Jang Keun Suk Zikzin Post Office, game corner, food area etc.. It is just like a theme park and gained lots of attention.

Jang Keun Suk said this time as before he was also involved in planning for the festival, but since it is a festival, first time he does it and it is not same as his Cri Show, he felt big responsibility. He also said that the ideas of the games were based on the people’s interests who come to the festival. People will come and play the games themselves to experience the Expo. So it would be more fun than you just imagine it.

Jang Keun Suk plans to do “Zikzin Fes” every year. The next one will be at Makuhari in Tokyo on Aug 24,25 with double size.