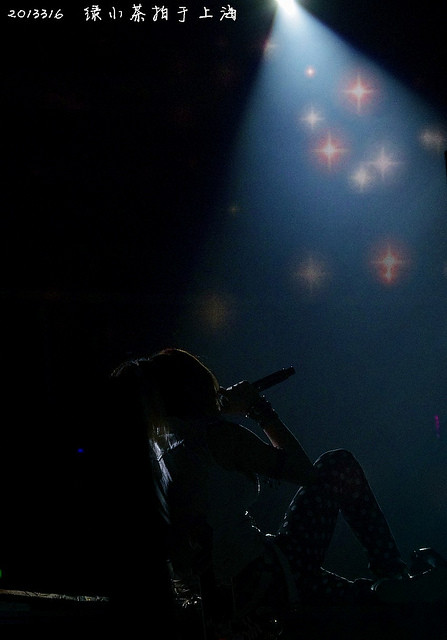 Before the Team H Party
First of all I would like to thank Sis Siew Hin and her Sister-in-Law to help us buy tickets in Shanghai (very good views even better than the VIP ticket I got in SZ CRI-2!).

Two days before we started the journey, we got “real” information that Sukkie would stay in the Intercontinental Shanghai Expo. After struggling for an hour, I decided to spend more than USD460 to change to this hotel. Yeah, I can breathe the same air with Sukkie – how crazy I am!

When I checked in the hotel at around 1:30 pm on 15 March, no eels or security guards could be spotted at the lobby. Before the storm, everything seems normal! I greeted and chatted with Sis Sally Wu, then we went down to the lobby and met some Chinese eels. They also stayed in the hotel but didn’t know which floor Sukkie was staying. I decided to tour around Shanghai before I met Sukkie. Thanks Sukkie for bringing me to visit such a beautiful ancient-cum-modern city – nice place, nice food and nice people! Shanghai, I will be back!

Team H Party on 13.3.13
I greeted and chatted with Sis Hazy Lee and Sally in the late morning (we all woke up late after early flight and busy schedule). We went down to the venue where photo session would be taken place at 1 pm. It is situated at the 1st floor (actually it is just next to the lift lobby). We saw lots of eels waiting there and most of them were well dressed and pretty. There were lots of security guards too. We went to find the friendly waiter at the lobby lounge and got the information that Sukkie was staying on the 28th Floor! We went into the lift and Hazy pressed “28”. My heart “felt the beat” when the lift was going up. When the door opened, a security guard immediately approached and asked us in Putonghua “Where are you going?” A few seconds of silence before I could respond in English “We are going downstairs”! Phew, our 1st mission failed!

We went back to the photo session venue. A security guard kept saying that it was useless for us to wait there as we couldn’t see him. He suggested us to wait outside where the eels with photo session tickets would queue up. But three of us decided to stay there. We met some Japanese and Hong Kong eels and chatted happily. A HK eel told us that she was waiting whether there was any extra “black market” ticket and alerted that it should be very expensive (over USD250). Eventually she didn’t get the ticket even she was willing to pay! Actually I also wanted to pay!!! (Note: I read in Baidu that some eels got the tickets in the price of RMB600 about two days before the photo session.)

When the venue door opened, we saw lots of eels were already waiting there but we didn’t know when and how they went into the conference room! Around 1:30 pm we heard lots of screaming and shouting from the venue, then we knew that Sukkie arrived there through secret pathway. We also understood that we didn’t even have a chance to see a glimpse of him. Another mission failed!

Then I immediately went to the Mercedes Benz concert venue to buy official merchandise. I arrived there around 2 pm but was told that all fanlights, tattoo stickers and black TH towels were sold out in less than an hour. Next to merchandise booth was “Tongi” counter and you would be given a free bottle of mini Tongi juice. I was lucky to get three different “Sukkie” Tongi juices.

I went back to the hotel with Sis Casey Ing to attend our “ECI’s High Tea Gathering”. It’s my first time to meet Sis Fran Tay. We spent a nice and happy afternoon chatting and eating before the show. It started raining when we left the hotel to the concert venue. “Rain God Effect” happened again!

We were all excited and happy to find that our seats were very good! Love to see handsome, hot, sexy, naughty, cute JKS singing and dancing in front of me! My eyes were only on him! I am still suffering JKS virus and in cloud 9 now.

Sukkie was not very happy because the tickets were not sold out. Actually there were a lot of empty seats. But he was very professional and this did not affect his performance. He was super handsome, sexy, cute, naughty over 2 hours of singing, dancing and playing! I was one of lucky eels to attend the Shanghai Team H Party! I was back to Hong Kong without any regrets, but full of appreciation and love. Sukkie, all eels from Hong Kong and Macau are waiting for you!