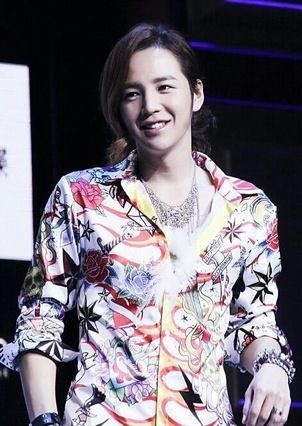 Sina Entertainment Report: Hallyu Star Jang Keun Suk came to Beijing on March 14 to hold press conference of his new Korean Album “I JUST WANNA HAVE FUN”, meanwhile they announced his agent company HS Media and Oceanbutterfly Music become partners. After that, Jang Keun Suk received exclusive interview from Sina Entertainment, he said: “I’m still not quite awake yet.” Because the past couple of weeks he has been doing concerts tour in Japan, I’m still “burning” for the new album and concerts tour. I couldn’t get enough sleep, that’s “very bad.” But he is involved all the planning for the concert from the beginning, so even there are only about 48 hours till the Shanghai Concert, he will bring “surprise” for the audiences.

At press conference, Jang Keun Suk showed on the stage after the ceremony of his agent company HS Media and Oceanbutterfly Music becoming strategy partners. He tied up his long hair, wore a flowery shirt and a torn white jeans which got all the eyes on it. Because his jeans were missing quite a lot material at the front, both his skinny legs were exposed. Facing all the attentions, Jang Keun Suk used his humor: I flew in directly from Japan, on the way here I fell down several times (here you go like this).” 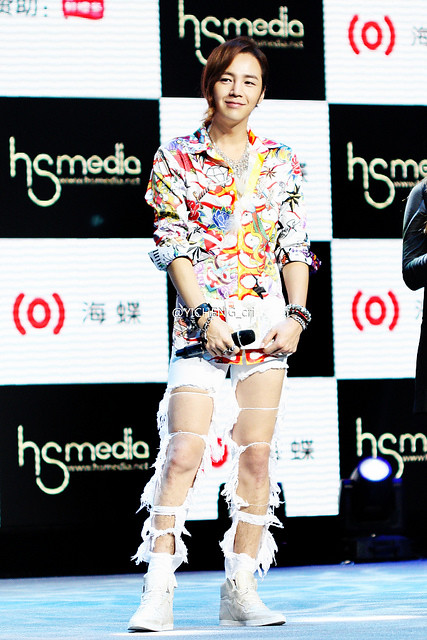 Good Turn Out on New Album, Jang Keun Suk: “So what? I still lost to PSY!”

Since the new album got released, it has gained good turn out. First cover song: “What Is Your Name?” had over 1 million playings in 24 hours. Another cover song: “Feel the Beat” first week on internet music sites got top 1 for Japanese-Korean music category. The new album trial playing had over 10 million plays in first 2 weeks… for this sensation, Jang Keun Suk expressed “proud of Team H” but he joked: “So What? I still lost to PSY.”

When he was asked about the “picking up girl song”-“What Is Your Name” Jang Keun Suk joked, he does not use “What Is Your Name” to pick up girl anymore. He has a new sentence: “What is your phone number?”(he said in Chinese) made all the fans there wanted to leave their phone number immediately. March 13 is White Valentine’s Day, fans have wrote mini lover letters to Jang Keun Suk, even he couldn’t read Chinese in the letter, he played that he read it and Jang Keun Suk was giving a “so touching” expression got a good laugh from everyone on site.

Q: Let’s talk about this album
JKS: The lyrics in the album are some common words we used on daily life, no special polish, is just like a normal conversation we have, very simple talk. That’s what this album is about, when we made this album, we used simple words as lyrics. I am in charge of promotion and production, Big Brother is in charge of music part. During work on this album, sometimes we had different ideas we even argued, but because of this process, we can give you a complete album.

Q: Was there some interesting episode during making this album?
JKS: Because we want the shooting site to be high and very happy, so during shooting the MV of the cover songs, we really drank two bottles of Campaign to boost atmosphere, afterwards, we really got high!

Q: This time you team up with Big Brother as Team H, what is “Team H” means? Does it have special meaning?
JKS: Originally the “H” means Hanyang University, because both BB and I were the students of Hanyang University. Afterwards, we have thought about what “H” stands for better? That’s why we posted some video clips on line, we hope the listeners of our songs can think together with us to find the new definition of “H”.

Q: Why you want come out as “Team” this time?
JKS: As an album of myself, the music will be like guitar lullaby, or maybe some pop style songs, that’s my music style. But when I go to clubs with friends for fun, I like to listen to electric style music, and Big Brother’s songs got good review in Europe. He is great in electric style music, so we thought why not to make an album with this kind of music, here come Team H.

JKS involves in all the planning from the very beginning: “From the stage look down, Jason just looks like a pig.”

Jang Keun Suk who will have a concert on March 16, within less than 48 hours flew to Beijing to have this album press conference, the Chairman of Oceanbutterfly gave him a Chinese calligraphy “不亦乐乎” (non-speakable happiness), which means”there is a friend coming from faraway it is a very happy thing.” Also hope has a bright future of his music career. Jang Keun Suk accepted this just like a good student accepts his award at school, but just a moment ago he was being naughty to “complain” the manager of his agency company Jason played too much but didn’t do much of work, he even put “angry” face and said boldly “When I was having concert in Japan, Jason was there, from the stage look down, he looks like a pig.”

When talking about concert, Jang Keun Suk admitted it is lots of work as being a “singer” and “planner” for the show, the staff was also worried about him that he couldn’t do the double jobs at the same time, but he stick to it and made it to the end. So he was very happy and satisfied. He also revealed normally after a concert, he would go back to hotel and drink a little to celebrate.

Q: What surprises will you bring to Shanghai show?
JKS: Because I’ve been involved with the planning of the entire tour, so exhibited a lot of new style which belonged only to Team H. I’m also planning something like a ‘guerilla’ show, such as suddenly appear in a club & hold a small scale concert.

Q: What other work plans do you have in China?
Jang Keun Suk: Team H was formed mainly for development in China so of course will want to go to more cities to perform so that more people will get to know us, understand our music. Apart from the fixed concerts, might also perform in small venues like in night clubs. 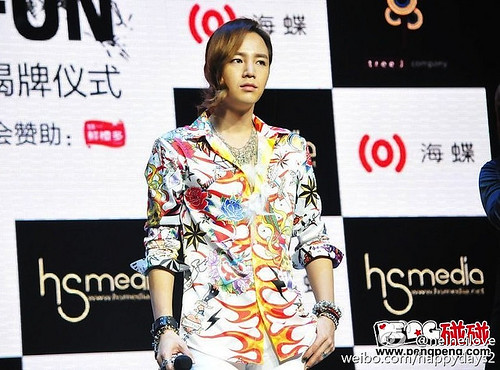 Q: So are you the real you now?
JKS: Yes, I am completely sleepy & hazy now, this is the real me in this state. Because I’ve been touring Japan for the last 3 weeks, I’m very tired. This morning flight from Japan at 6am, didn’t have enough sleep, so I’m completely hazy, I’m a total mess!