In the morning 10am, I and @真爱宝贝m go to hotel to wait for him, when we arrived there, there was a Chinese fan, came from the same hometown as me. She wore a T-shirt with Jang Keun Suk’s name, a Jang Keun Suk’s hat and she has his CD. She seems a real eel. I was only joining the crowd. Later @kosame chan also came, We chatted like for 10 min. Jang Keun Suke came out, no make up, looked like he just woke up.

He just appeared like a magic, very nice, suddenly came out. No make up, still wore the sleeping T-shirt, the one which has that sexy woman on it. He asked us if we have cigarettes, but none of us is smoker, no one could give him one. Later he got one from the people who works at hotel. He knew that we are Chinese fans, we said hello to him. He said to us: Do you have ice cream? (BING JI LING YOU MA?) We yelled: Yes (YOU)! Those French fans were so jealous. 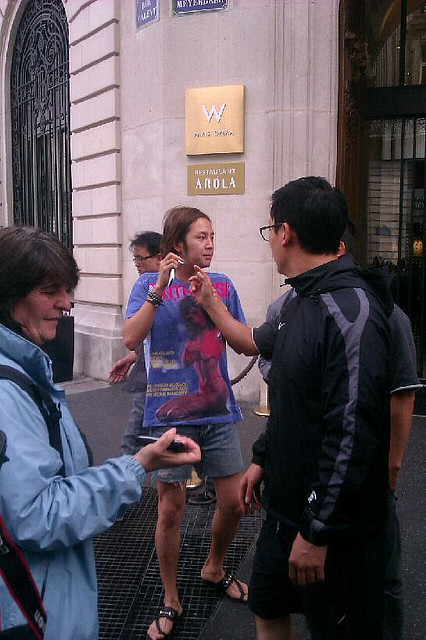 Later, we got to know that he needed to fresh it up. The Chinese fan gave him a watergun at this time. Today because of the rain ghost is here, Paris sometime is clear sometime rainy, @won_han came, we said we went to lobby to have some coffee, in the lobby we can see the hallway to the gate, we chatted and chatted, after a few hours, he came down and appeared in front of us. He dressed up and also brought that water gun.
(Note: Here is the picture of the watergun a Chinese fan gave him, he tweeted) 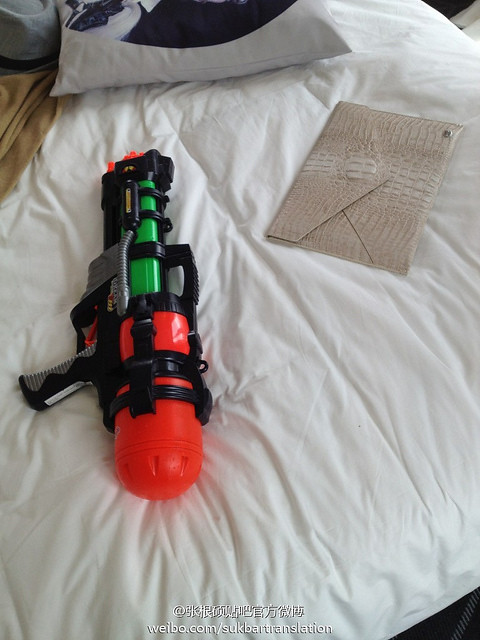 The 5 of us, we pretended to be calm, but actually inside we were so excited. Because we heard only if you’re cool there is chance to get the picture with him. During the time, he went out for like 3-4 times, one time went out play, one time took pictures, one time used watergun to spray water. He suddenly came to us and brought a bottle of champagne gave to pretty girl @真爱宝贝m we were all shocked, just like this, he gave out champagne! We followed him out, he gave more to the fans.

After he gave out the wines, he came in, looked like he was signing his CD with 3 Korean girls, I don’t know who are they. They went to lunch together. We just watched him all the time, he looked at mirror and sorted his hair, as he likes to show his beauty. Surprisingly, he came to us and took @kosame酱’s camera! We were all so excited, he gave the camera to his assistant and took pictures with 5 of us. Two times, we are so happy with it and felt fulfilled.

We went for lunch, it was almost 2pm, we went a Korean restaurant for lunch, around 5pm, we went back to hotel, the people works at hotel said he has not left yet. His flight is 21pm, so he may leave like around 5,6pm, we just waited in the hotel, around 5:30pm, he came, he smells so good. When we took pictures, I was leaning on him, my chin almost put on his shoulder.

Around 6 pm, his car has already waited him outside, I didn’t bring my camera, and my phone was out of battery… I took @真爱宝贝m’s phone and followed him to get picturse that he got on car; he sighed autograph for mama fans, and later the pictures that when he saw us. Wait when she came back, I will upload the pictures and video clips. I just want to say, he is really something else!!! Super fun!

Jang Keun Suke came out from the hotel, get ready to leave for airport, this the screen cut from the video clip, he was holding a toy that fan gave him. He was happy and showing off to us. 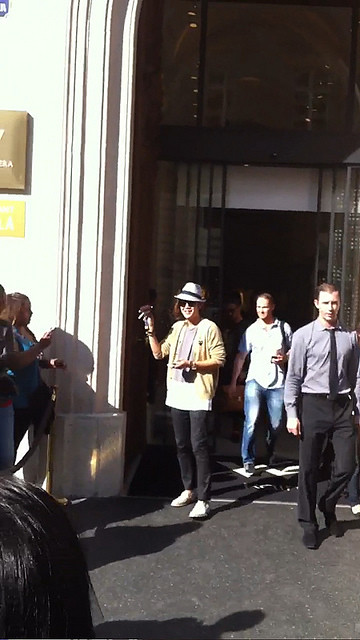 Jang Keun Suk was signing an autograph for a mama fan, it was not easy for her to come, the two sisters are all eels, they live somewhere which has a few hours drive from Paris, because they knew the news later from website, we told them that he will definitely came back to the hotel, so they waited with us, now they got his autograph, really lucky. 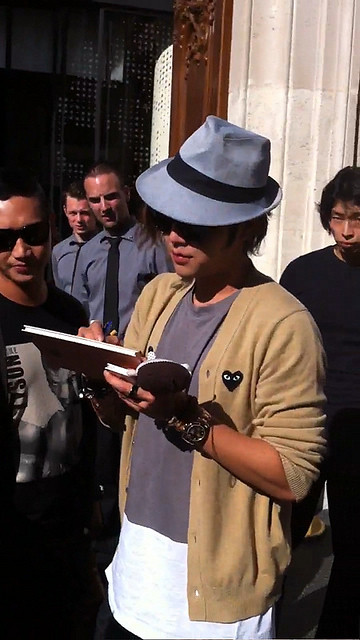 Everytime he sign autograph he would ask who is for? Really not many stars are like him, this picture he was carefully to ask that mama fan how to spell her name, the French’s English are very bad, They couldn’t speak English letter in English, so they only use French pronunciation, he has to listened several times to write them down. 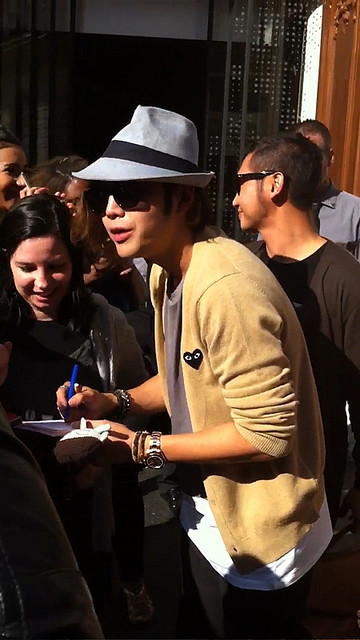 Here is a handsome one. 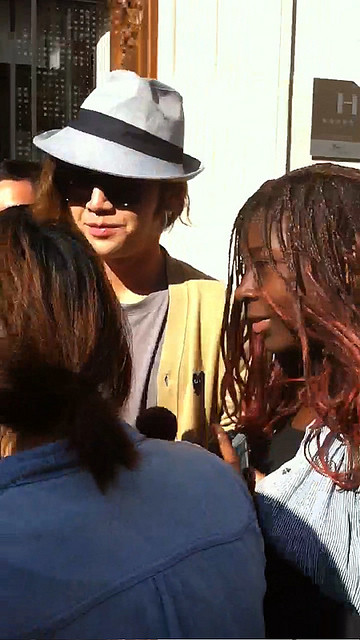 He likes to take pictures on the street with strangers… (aishi) this guy is nobody, just said to him “let’s take a picture”, he said ok and did it. 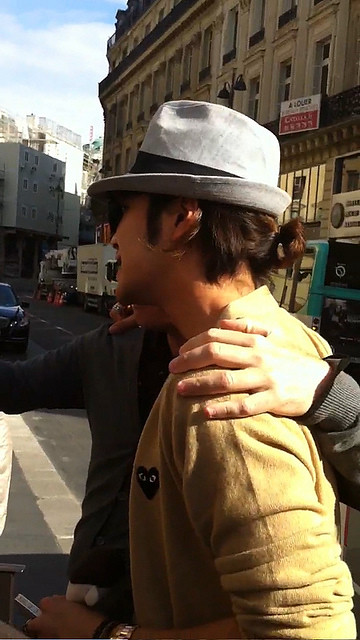 Here he said byebye to us, and said “see you soon”, at the end he said in French merci beaucoup. This is the end. I also finished the screen flashes, the video clips I don’t want to share them here, I want to keep it for ourselves. 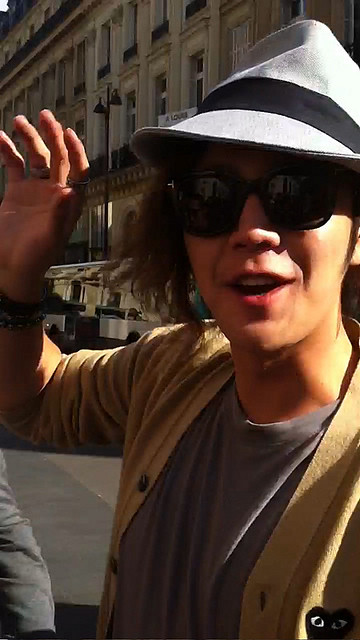 The left one, he is the first one at the lobby who got a bottle of champagne from Jang Keun Suk. I only got a bottle of wine (and actually it was from another fan, I only used it as taking pictures). 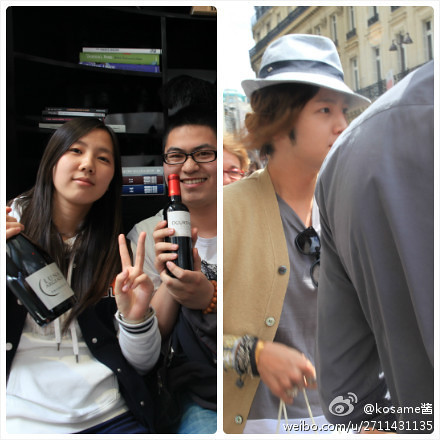