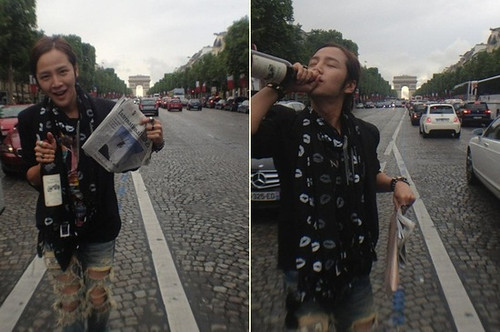 Actor Jang Keun Suk made an appearance in Paris, shouting “New York Herald Tribune” with wine in one hand and newspapers in the other hand.

On the morning of 14 July, JKS updated his twitter, “Not that I want to fight the whole world. I only want to excel against myself … New York Herald Tribune…! I struggled free of 4 years of fetter. Get crazy” and uploaded his photo.

In the photo, JKS held a red wine bottle in one hand and the New York Herald Tribune in the other while walking along Avenue des Champs-Élysées. The posture of JKS closing his eyes and enjoying the red wine shows the usual wacky style of JKS, and Arc de triomphe de l’Étoile is in the picture background.

In 2008, JKS wrote on his CyWorld blog that if he has a chance to go to Paris, he will definitely hold a bottle of red wine in one hand and newspapers in the other while walking along Avenue des Champs-Élysées and shouting “New York Herald Tribune”.

At that time, because of this blog post, JKS was nicknamed “Boastful Keun Suk”, and in 2011 when JKS participated in MBC’s “Kneedrop Guru” programme, JKS said, “In the movie À bout de souffle, there is one scene where the female lead walked along Avenue des Champs-Élysées selling newspapers. I wrote that after seeing the movie.”

Netizens commented that JKS “really did what he said”, “JKS is very cool” and “because it’s JKS, he’ll do what he says”.