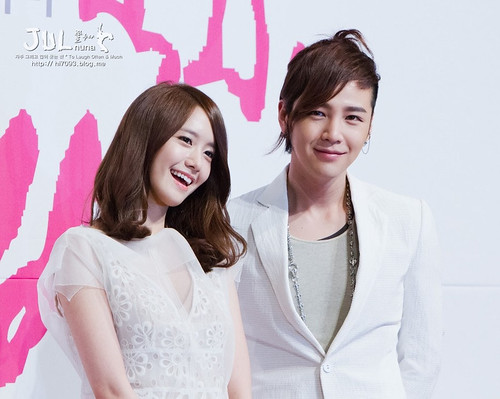 PD Yoon: How I decide to make Love Rain.

It has been 6 years since PD Yoon Seok Ho’s last work of “Four Seasons” series. He was pretty confidence to say: “I would like to tell everybody that I wasn’t taking a break, Love Rain is the drama can tell you that.” Is “Love Rain” just a “weather” series?
Mar 22, at Lotte Hotel, Seoul, Love Rain held press conference there. The leading actors Jang Keun Suk and Yoona with other cast members attended the press conference. PD Yoon Seok Ho said: “Before I was too much stick to the “Four Season” series. The last half of the series (I think here means Summer Scent and Spring Waltz, both of these two dramas were not get huge sensation as Autumn Tale and Winter Sonata), I didn’t really get recognition by the public.” He said he did self analysis that the four season series were not fitting into that time when there were lots of high quantity productions and intense drama – called MAKUTAN TV drama (which means typical Korean Drama that always are about the extreme scenes which normally won’t happen in normal life.) I was also struggled that what kind of drama I will do next. Finally, I decided to do an over generations drama. He said:”Love Rain is not OLD, but Fresh and Nostalgia.”

”JKS not only has flower boy’s temperament but also has manly side quality. His acting is very in detail, his facial expressions are really right in place. The most amazing thing is his eyes’ expressions, they are great! Because of these I choose him.” “During shooting I just realized the reason he can act so naturally and right in place, because whenever we pointed out to him, he would immediately correct himself for the bad part. He is a perfectionist. I can tell he is a talented actor. The result is his talent plus his hard working.”

Earlier there were media reports that said Jang Keun Suk were not being nice at shooting site and caused the difficulty for work. Regarding these reports, some people would like to get clarified from PD Yoon, he said: “The whole team of this drama has dozens of people, if one people doesn’t do good, the shooting of the drama won’t be good. Those reports were not true. During shooting, JKS never behave as a big celebrity, he was very warm and friendly, I feel he is not as same as many other stars.”

Yoona said:”Because I’ve never lived in 70s, I got lots of indirect experience to get ready to play this role.” “Like talk very slowly, not much words. Instead of showing feelings out but to restrain and hide them inside.”

JKS said”70s shooting focused on sensibility moments. To experience the analogue era’s feeling which we can’t experience it at our time. This part has become a textbook in my acting career. It was a learning experience.

What’s the difference between 70s love and 2012 love? Yoona gave a wise answer: “Love is the same, but in different way of expressions. Also different time period what to like is also changed. Romance, pure love, sincerity are also exist in that era, but just too shy to say them out. Jung Jin Young (plays In Ha in 2012, in the drama he met his first love again in modern part.) who had 70s experience said: The young love is the main part of this drama. I think two different time period just like two sides of a coin, head and tail. He questioned back:”Young people, middle age people’s love are the same, aren’t they both of naïve and illusory? If middle age people have recognition on the first love after they watch Love Rain, because they are in the middle age.”

Jang Keun Suk admitted the plot in Love Rain has some difference with real life.
He said: As In Ha’s role, the love hasn’t really expressed out but had to separate with the lover, this is really sad. But, in real life if my father can’t forget his first love and always being miserable, I won’t be happy about it. Since if that’s the case, there will be someone get hurts. Marriage is a commitment, when you have child, you may have disagreement. You trust each other, but keep thinking of first love, that will bring problem. I played In Ha I feel I can play it, but in reality I don’t want to be in that kind of situation.” He also said: “In the drama I feel for In Ha, in real life I also prefer pure love.”

Yoona on compete with Yuri (her colleague from SNSD who is staring at SBS’s King of Fashion): Hope both dramas can be “the hit”.

Love Rain will compete with MBC’s Light and Shadow, SBS’s King of Fashion. Yoona said hope both drama be “the hit and she and Yuri will encourage to each other”.

JKS said if Love Rain’s rating reach 40%, he will do shuffle dance at Meong Dong. Yoona also doesn’t want to be left behind, she said she will join JKS for shuffle dance.

Asked about to work with Yoona, JKS said: “I work close up with Yoona on this drama and I see not only a performer on the stage but also an actor, she is good and I learnt a lot from her, teacher Yoona, thank you!”

Yoona said about JKS:” Before I worked with other actors, since I’m younger than most of people on site, people are normally being nice to me and take good care of me. This is the first time I work with same age range actor. Before I met Jang Keun Suk I was worried that he is arrogant and cold. But since the first day of working together, I never feel that way, he is very nice and also being cheerful on site, he takes good care of me, I am very glad to work him, he is a good sangbae to me and I like to have an older brother like him.” Keun Suk asked her: “Who is your favorite actor?” Yoona said: Jang Keun Suk. Keun Suk joked back: I would say I love Lee Soo Man (CEO of SM Entertainment, the big boss of SNSD and Super Junior etc..) . Also there was a reporter asked JKS who is his favorite girl from SNSD. He joked: “Of course, would be Yuri (because Yuri is currently staring in SBS’s King of Fashion, which is competing with Love Rain) his playful answer got quite laugh.