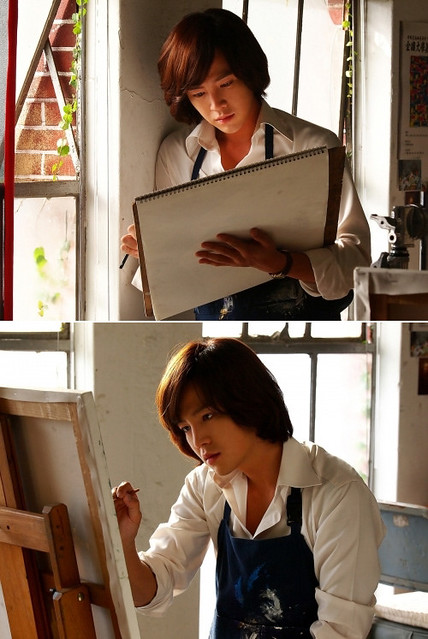 In the drama, he acts the role of a 100% innocent and outstanding Arts college student in the 1970s, and also the role of a modern commercial photographer Seo Jun who has a cool exterior and a passionate personality.

The photograph of JKS being immersed in his student role and passionately sketching makes people think of a scene from an innocent comics, and the 180-degree difference from his usual lively self is eye-catching.

Said JKS, “Because the 1970s Seo In-ho is melancholic and gently, I am working hard to express this sentimental and meticulous character. The emotional lines especially in Love Rain helped much in the emotional scenes. I will put in my biggest effort to express these pure emotions.”

The director said, “In the drama, JKS has undergone a 1801-degree transformation for this delicate yet strong character. The actors exhibit their emotional side which makes the plot more interesting. Because of multi-talented actors, we can see them brimming with energy. It looks nice to see them putting in their feelings into the characters during filming.”

The innocent love of the 1970s and modern love in 2012 in the director’s beautifully filmed Love Rain will be broadcast in the first half of next year.