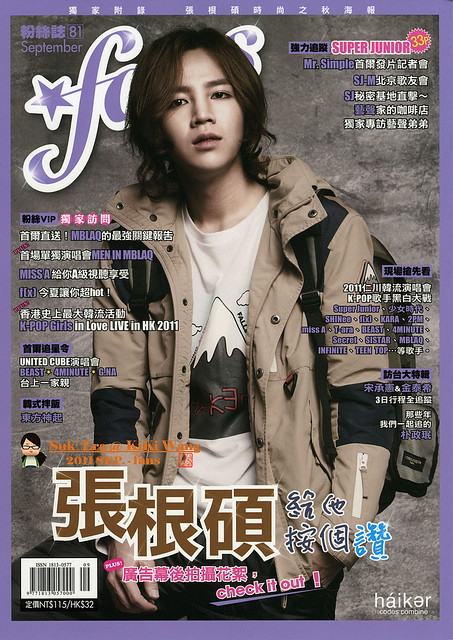 For rest of article, 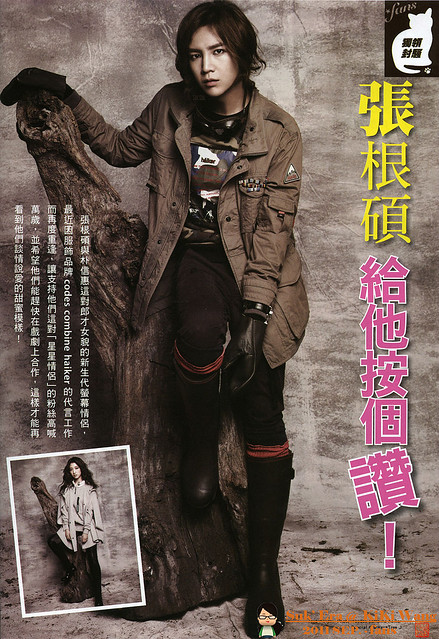 This pair of compatible, new-generation screen lovers Jang Keun Suk and Park Shin Hye (PSH) reunited recently for the product endorsement work for Codes Combine Haiker, much to the delight of their supportive fans who look forward to seeing them together again as lovers in a drama. 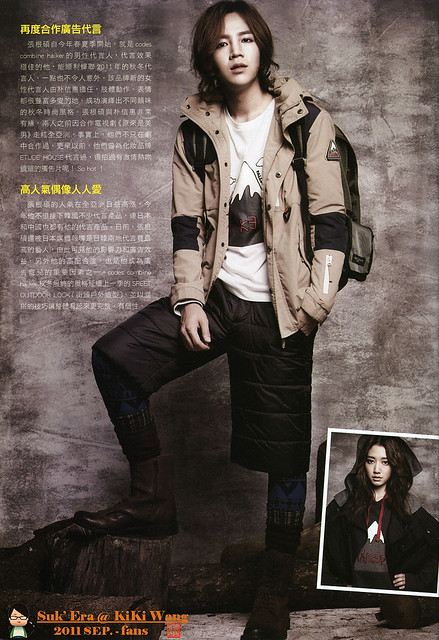 Since spring/summer this year, JKS has been the men’s ambassador for Codes Combine. It is not surprising that JKS with his effective endorsement appeal can successfully continue as the ambassador for autumn/winter 2011. The new women’s ambassador is PSH. Due to her range of expressive body language and facial expressions, she successfully brings out the different flavours of autumn/winter fashion styles.
JKS and PSH are often brought together by fate. Not only have they acted together in “You are Beautiful” which boosted their popularity in the whole of Asia, further back in the past they had also endorsed cosmetics brand Etude House and even filmed a kissing scene in the advertisement! So hot!

High-popularity idol that everyone loves

JKS’ popularity in Asia is rising every day. He has accepted many product endorsements in Korea, and even in China and Japan. Recently, the Japanese media has reported that JKS’ product endorsement fee in Korea and Japan is the highest amongst celebrities, from which his influence and endorsement effectiveness are evident. Also, JKS’ high level of cooperation is one of the important reasons why he is favoured as an ambassador. The autumn/winter collection of Codes Combine is a continuation of the previous season’s Street Outdoor look, and uses mix-and-match to make the overall look more complete and full of character. 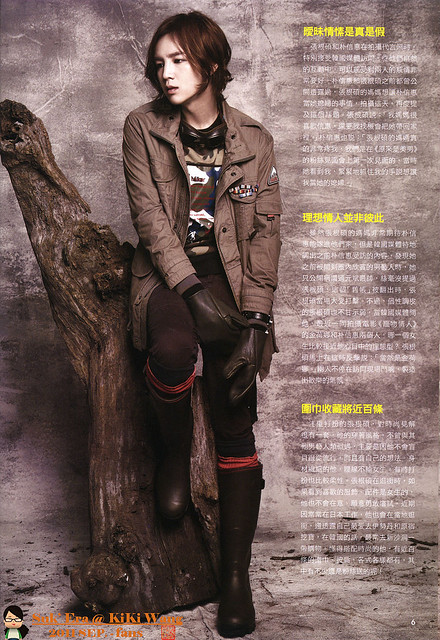 During their endorsement photo shoot, JKS and PSH accepted a Korean media interview and from their natural interaction, one can sense that their relationship is very good. JKS and PSH had revealed before that JKS’ mother would love to have PSH as her daughter-in-law, and this topic was raised again at the interview. JKS said, “My mother likes PSH and wants me to find a chance to bring her home.” PSH said, “JKS’ mother really dotes on me. We first met at YAB’s fan-meeting. When she saw me, she grabbed my hand and said she wanted me to be her daughter-in-law.”

Their ideal lover is not each other

Although JKS’ mother wants PSH to be her daughter-in-law, the Korean media especially searched for PSH’s previous interviews and found out that PSH had only publicly complimented Won Bin for his handsome looks when asked for the male artiste that she admired most, and did not mention JKS at all. It was a great blow to JKS, but the playful JKS responded by saying that between PSH and Kim Ha-neul (his recent co-actress in YMP), Ha-neul was closer to his ideal type. The two kept bickering during the interview and enlivened the atmosphere.

Nearly 100 scarves in his collection

JKS pays attention to his attire and has his own unique fashion interpretation. His fashion style has never been similar to other male artistes, mainly because he does not blindly follow fashion and has his own opinion. The slim JKS has a waistline that does not lose to a girl, and sometimes his dressing leans towards the gentle side. When JKS is shopping and sees female accessories that he likes, he does not mind it and would dare to try it. As he works in Japan more frequently these days, he will also go shopping there and reveals that he likes to dig for treasures at Isetan and Harajuku. If in Korea, he would shop more frequently at the new Myeon-dong area. Knowing how to mix and match fashion, JKS has close to 100 scarves and shawls of all kinds, and some of them were gifts from fans! 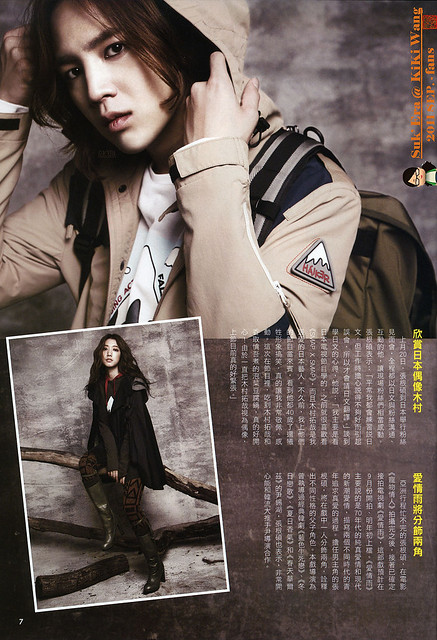 On 20th last month, JKS had a fan-meeting in Japan and conversed in Japanese throughout the whole event, which touched all the fans there. JKS said, “Usually I will practise speaking Japanese, but in the course of work, I am worried that my level of Japanese may give rise to misunderstanding, so I would have a Japanese translator.”
On his tips for learning Japanese, JKS said, “I learn mainly from Japanese television. I like to watch SMAP X SMAP, and Kimura Takuya is the Japanese artiste I love most. Recently, I attended their programme as a guest, and saw how, at the age of 40, they sacrifice their image to be comedic, which touched me and I admire them more. During the programme, I was very happy to taste the kimchi soup that Kimura and Shingo cooked! As Kimura is my idol, I was very nervous to attend their programme.”

With a hectic schedule in Asia, after filming “You’re my Pet”, it has been confirmed that JKS will act in drama “Love Rain” which starts filming in September and will air early next year. “Love Rain” describes the pure romance of the 1970s and the modern love story, and the process of how two different generations pursue love. JKS will act two different roles of father and son, and expressed his happiness to work with Seok-ho Yun, renowned director of the Four Seasons dramas. 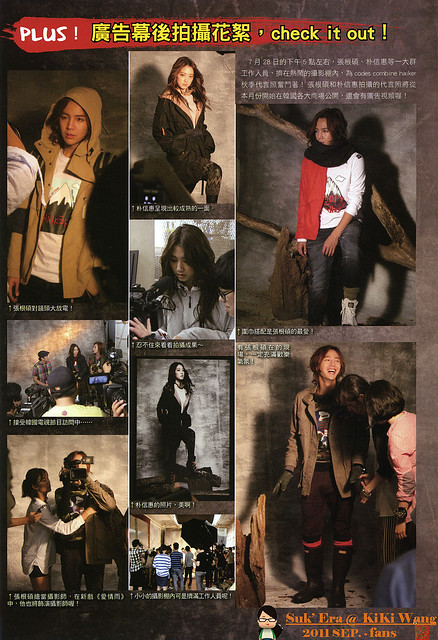 Plus – Photo Shoot behind-the-scenes. Check it out!

At 5 pm on 28 July, JKS and PSH were doing the photo shoot for Codes Combine autumn/winter collection. Their endorsement photos will be revealed at major Korean malls from this month, and an advertisement video is coming up!

Left column (top down):
– JKS oozes charm at the camera
– Midst of Korean media interview
– JKS fights to be the photographer. In “Love Rain”, he also acts the role of a photographer.

Right column
– JKS loves to mix and match scarves
– Wherever JKS is, the atmosphere will be full of laughter 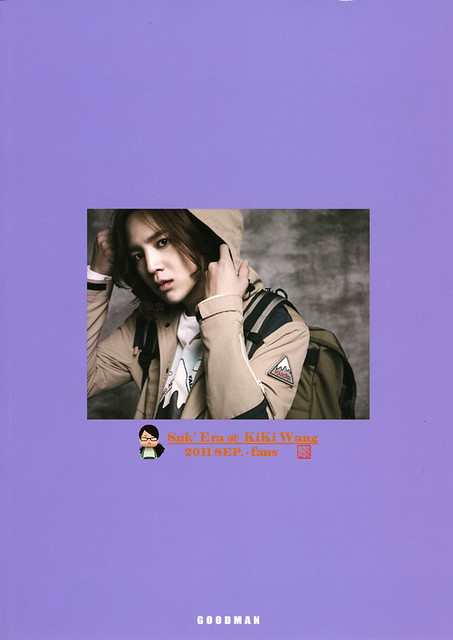 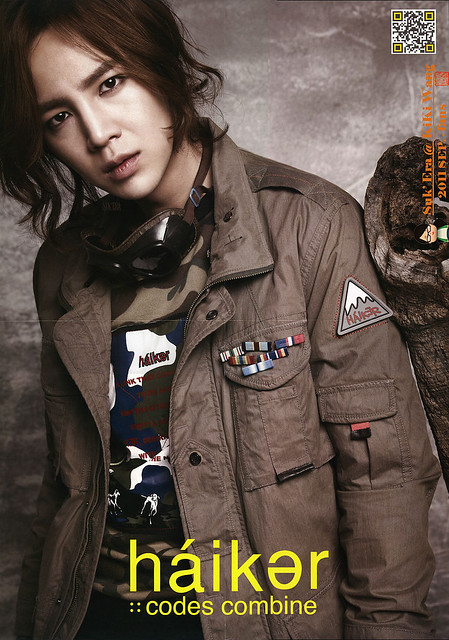