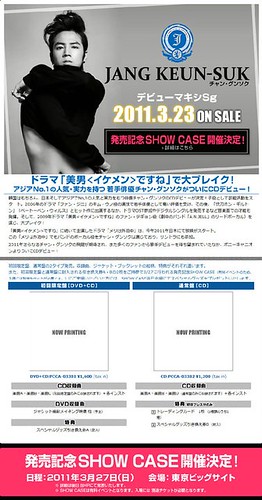 Most fantastic news ever!!
Jang Keun Suk is releasing his first solo music album on 23 March 2011 in Japan!!
Do I hear screams all across the globe? (Arrrrgh….!)

The album, to be released by Pony Canyon Japan, has 2 editions – the limited edition includes a DVD and the other does not. Now, I can’t read Japanese, but it seems like there will be 3 new songs in this album. And the music producer is the one who produced “My Bus” in “Marry me Mary” OST. They are in the midst of selecting songs, and recording will begin in early February.

On 27 March 2011, JKS will appear at his showcase at Tokyo Big Sight, where attendance is expected to be around 20,000 people.

For now, it seems that the album will be released in Japan first (or only?). I must get hold of the album by hook or by crook!