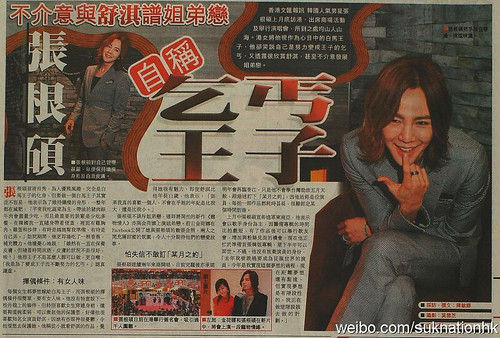 5 May 2011 – Popular Korean male star Jang Keun Suk visited Hong Kong at the end of April. He attended events at the mall and held his concert. Crowds amassed wherever he went. Hong Kong women see him as their Prince Charming, but he laughed and said that he is a beggar who tries hard to become a prince. He revealed that he admires Shu Qi and does not mind a relationship with someone older than him.

JKS has pretty delicate features and personality-wise elegant and humorous, totally a Prince Charming but it is not easy to be one. He said that in order to maintain a slim figure, he has to diet throughout the year. “Usually I eat mainly vegetables and will try to avoid oily pork and beef. The most important tip is to eat less but have more meals. In Korea, I carry a lunch-box around with me. In it is chicken breast, egg and salad. Sometimes my mother prepares it for me and sometimes I prepare it myself.”

During the interview, JKS ate a banana on the spot to replenish his energy. He even said worriedly, “Although I’ve been maintaining the condition of my skin, with the passing of time my skin condition is not very good, sigh!” Pointing out that not everyone can be a prince, JKS took a dig at himself, “I am a beggar who continues to work hard to become a prince.” A serious and modest guy.

Every girl dreams of getting married to her Prince Charming, and JKS’ selection criterion is very simple: the girl must be feminine. He did not specify any appearance requirements, but likes girls to wear dresses and be gently graceful and weak to evoke his protectiveness. He likes well-known actress Shu Qi because her eyes convey a sense of forlorn-ness which makes him want to protect her. He claims that he has seen Shu Qi’s acting since young and feels that she is very attractive despite the fact that Shu Qi is older than him by 11 years. JKS says, “If I really like a person, I don’t care whether she is older or younger than me.”

JKS is not against an older woman-younger man romance, and will be acting out such a romance in his new movie “You’re my Pet” which will be filmed soon. Recently, Kim Ha-neul disclosed several photos of her and JKS on her Facebook depicting a sweet atmosphere between them, which increases the anticipation towards their romance story.

Not committing to any month for fear of breaking promise

JKS has held his concert in Hong Kong for two years running. At the end of this concert, he promised that he will come again to Hong Kong next year, but he will not commit to a fixed month like Taiwanese band Mayday, because he is an actor and every acting project consumes a lot of time, so it is hard to commit to a certain month to visit Hong Kong.

Last month, JKS announced his plans to venture into Southeast Asia in the main identity of a singer, because album production takes a shorter time than an acting project. With an album, JKS can organise fan meetings and increase the opportunities of meeting fans. Now he is busy with preparing his first Korean album that is set to be released in the second half of this year.

But he has not abandoned his role of an actor. “Last year, I said that I want to conquer the world as an actor. This year is the process for me to realize this dream. Now I am still a bit far from achieving my dream, but in order to achieve a dream, there must be gradual steps. I am now doing what I should do at this stage.”