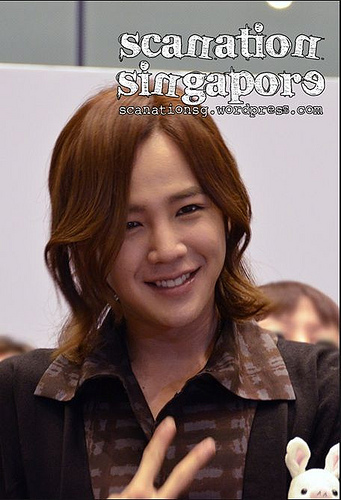 Some of you have been asking about whether JKS went clubbing after the Singapore Cri Show on 23 April. The answer is, yes, he did. I gave up on following him because of logistic problems and I was too tired. But Karen was among a group of fans who followed him that night and she related what happened. Would like to thank her for giving me consent to post it here. What happened is from her, but this is written by me with my thoughts in square brackets [ ] .

Any inaccuracy in terms of details is unintentional as I was not there, but generally this was what happened.

After the Singapore Cri Show, JKS went to Jumbo at Clarke Quay to have his seafood meal [must be the black pepper or chili crabs he wanted to try!]. The fans saw him when he came out once to the restroom, but other than that, he dined in his private room [my assumption].

JKS’ manager Kim did come out, presumably for a smoke, but when he saw the fans milling around, he didn’t do so. Some fans crowded around Kim to ask him some questions, and Karen asked, “Would JKS be coming again to Singapore next year?”

Kim replied, “No, he’s not coming back.”

A collective gasp from the fans… Kim added in Chinese, “假的”
[meaning “false”. Of all things to learn, Kim has picked up this trick from JKS!! JKS has used this before at HS Media’s Shanghai press conference. Then, JKS said to fans, “You are pretty” followed by “假的” (it’s false).]

Karen pointed an accusing finger at Kim, “You bluffed us!”

Kim then blushed.
[So cute! I didn’t know he’s so shy! And I heard Kim does not have a girlfriend yet…haha~]

After his meal at around 11 pm plus, JKS and group went to this pub called “Beer Market”.
The fans went in too and most of them ordered beer or coke. JKS’ booth was blocked from general view by some partition, but the fans managed to get occasional glimpses of him. JKS did get tipsy, and once he came outside the partition and did a cute little dance before he was pulled back into the booth by the others. [I think no photo of his outing to the pub was circulated online, because the pub did not allow photography, and anyway the fans just wanted to look at JKS ^^ ]

By the time JKS left the pub at past 3 am, his group was generally drunk. The fans followed JKS back to the hotel, and all of them rushed into the hotel lobby before JKS so that they could say good night to him there. Karen was on her motorcycle and she decided to follow JKS’ car all the way, so she was the only one outside the hotel and right beside his car to see JKS come out of the car. Karen was hesitating whether she should call out a “good night” or not, and she finally said that.

JKS’ response came a bit slow [imagine his tipsy state], but he did turn around and smiled at Karen.
[aaaaargh!!! It’s almost like the scene in “Marry me Mary”, where Mu-gyul and Mae-ri were drunk and MG smiled so sweetly at Mae-ri from behind the lettuce!!! I forgot to ask how Karen felt, but just imagining the situation is enough to make my heart melt!]

Then, Jason Jang’s car drove past Karen, and Jason (also drunk) said to Karen in Chinese, “It’s been hard on you.” [i.e. for following them all night].

A most worthwhile night for Karen!

19 thoughts on “[Fan Account] By Karen after Singapore Cri Show”