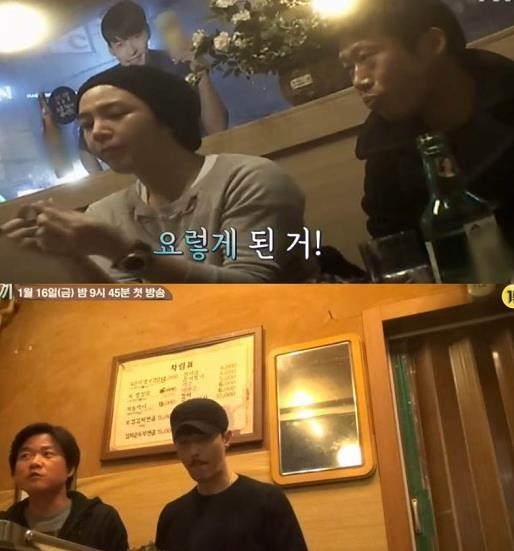 Tonight, at the end of TVN programme ‘3 Meals a Day’, the trailer for fishing village edition was aired. In the trailer, the main persons for the fishing village edition Cha Seung Won, Jang Keun Suk, Loo Hae Jin & PD Lu Young Suk gathered together, discussing the roles in the programme. In the trailer, CSW said in his 45 years with seasoning, he’s very good with cooking, JKS also said he had good skills in cooking, receiving a lot of eagerness from viewers.

Apparently, the three will become fishermen, going to a fishing village on a small island, living a self-supporting lifestyle on the seaside. In regards to this, CSW, JKS etc of course wouldn’t have agreed easily. Therefore, PD LYS used all his tricks to persuade them to appear on the programme, even resorting to sweet talk, coaxing & lying, the viewers were enjoying it. ‘That island is very good, it’s heaven’. PD LYS is starting to promote the island they will be going to.

Sure enough, how did PD LYS cheated CSW, JKS, LHJ & made them appear on the programme willingly? When the 3 get on the island, will they adjust to the self-supporting lifestyle on the fishing village? ‘3 Meals a Day Fishing Village Edition’ will be aired on 16th January next year.
—
Note from Wen: I translated this from the Chinese version of Kpopstarz but I think most news articles are similar. However, one point to note, someone said Cha said he doesn’t use MSG but it’s not mentioned in this article. I am sure English versions of the news will come out soon but this is for info for time being.