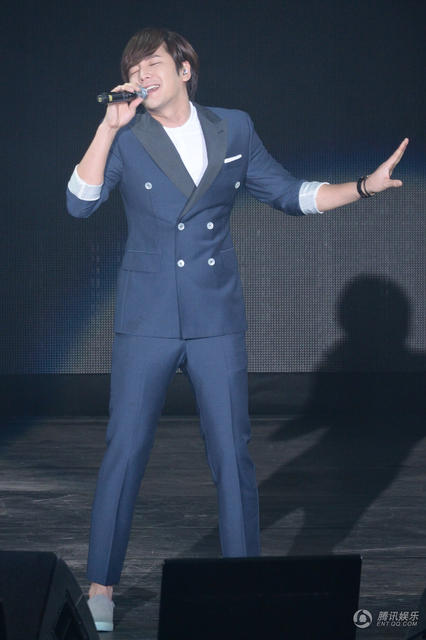 On the night of 31 Aug, ‘2014 JKS Zikzin Man’Shanghai FM was held. In the almost 2 hours FM, JKS sang over 10 songs. JKS was continuously full of humour, jokingly said since he’s the Asia Prince, he has to save Asia, also said his wish before his death would be to go to all the night clubs in the world with his son.

CLAIMED HE’S ASIA PRINCE, THAT’S TO SAVE ASIA
At the start of the FM, JKS walked out from the back saying loudly in Chinese ‘How are you? China!’ Stirring up the first heat. After singing a few songs, JKS sat down on a chair in the middle of the stage and said to eels: ‘I miss you so much’. He even complained, the MCs in the past concerts only talked of themselves so he decided to be MC himself this time. ‘You only listen to me, just look at me.’

He said, this time he brought something different for his fans. In the video afterwards, JKS showed precious photos from birth to now, including his baby nude pic, the first time he appeared in an advertisement at age 5 which was his debut, when he went to study abroad in New Zealand at age 15, a whole series of activities in the entertainment industry since his return to Korea, until he became Asia Prince after he played in You’re Beautiful. JKS half jokingly said ‘Asia Prince’s profession is to save Asia!’ He also said to eels ‘thinking back of these 27 years of my life, I’ve only spent 5 years as an ordinary person’s life, looks like I was born to be an artiste’.

ASKED FANS: SHOULD I GET MARRIED NOW?
Apart from talking about life, he gave a lot of benefits, through VCR, he read a confession letter to fans in Chinese. In the video, he repeatedly said ‘thank you’. When asked how was his Chinese learning, JKS claimed he has improved, and he’s saved some Chinese words in his phone diary. However, after he got his phone out, he said his diary was lost, the only sentence he could remember was ‘I want to kiss you’, which made all the fans laughed continuously.

JKS occasionally teased his fans, he revealed his parents married at age 27, asked his fans if it’s time he should marry. Fans booed unanimously, he continued to tease, ‘so marry later, how about have a child first?’ Apart from this, he also revealed he will start his masters studies on 1 September, he took 8 years to complete his bachelor’s degree, it was really hard, now he has to start studying again, don’t know when he will complete.

TALKING ABOUT WISHES: GO TO NIGHT CLUBS AROUND THE WORLD WITH HIS SON
JKS had a deeper interaction with eels. He picked out some questions which were posted by them in the official website and answered them. Fans asked him to drink less alcohol, smoke less cigarettes, look after his health, still dance Sexy Back for them when he’s age 80. With these requests, JKS neither could cry or laugh, said how could he dance at 80. But at everyone’s persuasion, he stood up without much ado & danced a little bit of Sexy Back to the music.

When he was asked again ‘a wish he wanted to fulfil before he dies’, he said ‘to go to all the night clubs in the world with his son’. ‘This is very good! I want to be a father who is like a friend.’ As to plan for the next TV drama, he said he has received a lot of scripts, he was seriously considering. A fan left message wanted him to play a vampire, JKS revealed ‘amongst the scripts I have, there is one about vampires, that’s all I can say’.

19 thoughts on “[article] JKS TEASED FANS. HOPE TO GO TO ALL THE NIGHT CLUBS IN THE WORLD WITH HIS SON”