Zhang Keun Suk Doesn’t Rule Out the Possibility to Have a Chinese Wife.
He Praised Tang Wei’s Transnational Marriage 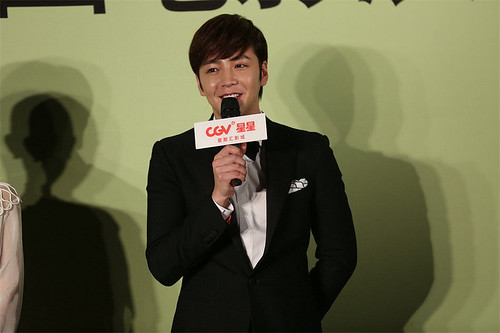 “2014 Korean Movie Exhibition” opened in Beijing on Aug 27. The Vice President of Korean Film Revitalization Committee, Mr. Hong Cheng Chee talked about China Korea movie exchange. He mentioned the recent marriage between Tangwai (Chinese actress) and Kim Tae Yoon (Korean director) was a “culture exchange”. Jang Keun Suk who was appearing on site as PR Ambassador said that he wouldn’t rule out the possibility to have a Chinese wife.

Korean Film Exhibition is held in China every two years. According to Mr. Hong Cheng Chee the VP of Korean Film Revitalization Committee’s introduction, this year they brought 10 new and classic Korean films. He hopes that Chinese audiences would learn about Korean film themes.

Mr. Hong thinks, at current, Korean and Chinese movies both has its own advantages. “Chinese movie normally finished production in a short time, but Korean films more dedicate to the artistic expression. Chinese movie market has it is own unique advantages. He welcomes everyone to make films in Korea, the government will reimburse 30% cost.”

Bai Bai He: My best girlfriend wanted me to hug Jang Keun Suk 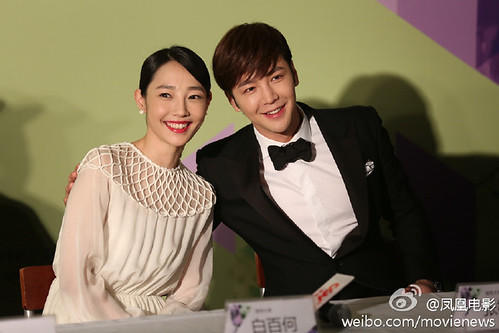 Chinese Actress Bai Bai He as PR Ambassador for China side, she frankly said she has watched many Korean films and dramas.

For those cliché scenes in Korean dramas “car accidents, cancers, terminally ill” she joked that she has “died” in some films too. “I think Korean entertainment culture developed very well. I like the structure of Korean dramas, in K dramas it has dramas about a group of people, not just the lead male or female characters. It is interesting to watch.”

This time Bai Bai He and Jang Keun Suk as Chinese and Korean PR Ambassadors, Bai said she has married so is not convenient for her to comment on “Man God” Jang Keun Suk, but she revealed that she has an “important mission”: “My close girlfriend really likes him. I will look at him a bit more for her and give a hug to him for her too.”

After hearing Bai’s comment, Jang Keun Suk laughed, he said he would love to have opportunity to work with Bai for romantic comedy drama. “I have watched Bai Bai He’s film, she is “break up specialist”.

Because Jang Keun Suk is very popular in China, he was asked if he would like Tang Wei to have the same “culture exchange” to a foreign country. He smiled and said: I think Tang Wei (‘s marriage) across language barrier that’s impressive, maybe next “culture exchange” is me. See, I’m coming to China.”

Jang Keun Suk mentioned if his other half is in China, he would be able to learn more about Chinese culture and also comes to China often to bring happiness to everyone.

Except Jang Keun Suk and Bai Bai He, there are many other stars at red carpet in the opening ceremony. (Here I will not translate their names)

The Korean Film Festival will be in Beijing from Aug 27- Sept 3, in Shanghai Sept 10 to Spet 17. There will be 10 movies to show. “Target” “Flu” “Temperature of Love” (I think Jang Keun Suk recommended this one) “My Wife’s Everything”.