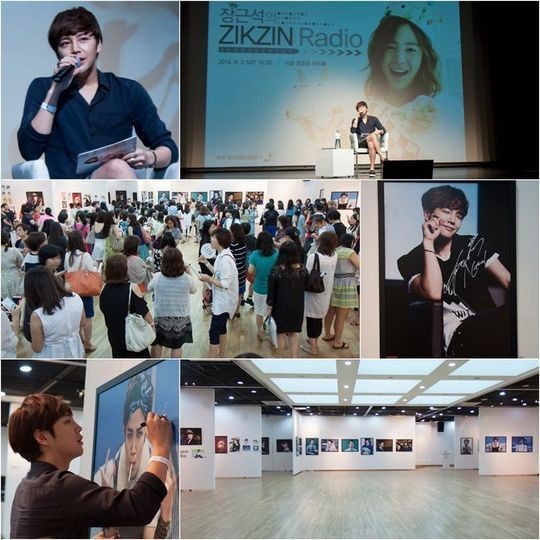 Jang Keun Suk was full enough to get the ‘world prince’-like spotlight at his birthday event which was consisted of time to exchange with fans about various spectacles such as ‘2014 Jang Keun Suk Birthday Celebration Sharing Photo Exhibition’ and Jang Keun Suk’s ZIKZIN Radio open broadcast.

The photo exhibition was consisted of vivid pictures and video zones of Jang Keun Suk. Fans’ infinite affection could be felt from the fan art zone since there were many heartfelt gifts from overseas fans. Also this photo exhibition attracted eyes by making special space for fans that visited to take sticker photos in order to give fun.

Especially, Jang Keun Suk conveyed this delightful and thankful mind toward the photo exhibition which fans prepared by looking around the exhibition without missing any pictures and autographing on his pictures. He also spent joyful time by writing on the guest book and taking sticker photos.

Profits of about 16,200 thousand won were saved and this profit is going to be donated to Namsanwon where Cri J is continuously volunteering at as last year.

Jang Keun Suk conveyed his thoughts and thankful mind to not only domestic fans but also fans from Japan, China, Thailand, and Peru, “I’m so happy to spend my birthday again with my fans this year. Development with my Eels is going to continue”.

A person concerned of Cri J revealed, “We held this event this year again in order to give a meaningful birthday present to Jang Keun Suk who always states about sharing and volunteering”.

Meanwhile, Jang Keun Suk is planning to have communicating time with Asian fans close and hot through ZIKZIN Radio.