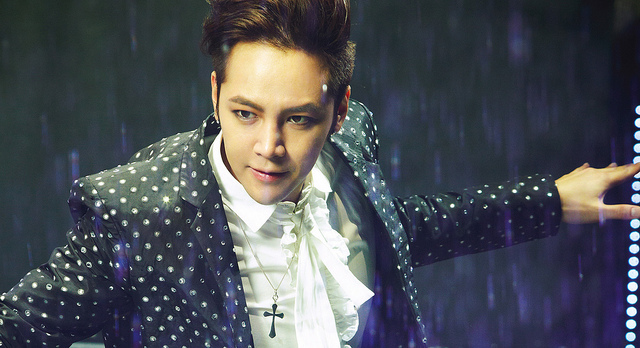 Jang Keun Suk admitted the inspiration for the album comes from enjoying music.
July 16, Asia Prince Jang Keun Suk with HS Media and Ocean Butterflies Music released 2014 album “Driving to the Highway”. Also released MV “Raining on the Dance Floor” Chinese version. This album breaked Jang Keun Suk’s old style, added many new music elements. There is “Open The Door” which expressed the new side of Team H. “Driving to the Highway” which was played by one guitar and “Still Working” brings the big room sound to the extreme. Jang Keun Suk first time revealed thoughts and inspirations behind the production. “We can say Team H matured in this album. The previous album was mainly for stage performance and enjoyment. So it has strong rhythm, but this album you can enjoy from the stage performance but also you can enjoy it when you’re driving. That’s why we call this album “Driving to the Highway”. You can try to listen this album when you’re driving.

Jang Keun worked hard on learning Chinese and revealed the Team H’s “brotherhood”
This time, Jang Keun Suk specially recorded two songs with Chinese version “Take Me” and “Raining on the Dance Floor”. Jang Keun Suk who has shown off his Chinese in previous Team H album this time for “Chinese eels” he worked hard to learn Chinese and got confident on improving his Chinese. Many fans are curious about how Team H got its name. Jang Keun Suk said he and his good partner Big Brother are both from Hanyang University. Once for a culture festival in the school they formed “Team H”. With the same love for music Team H has released music album and held concert shows. We didn’t expect it is liked by so many people.

Jang Keun Suk recommends Korean gourmet food to Chinese eels. He confessed to fans: “I want laugh together with you!”
Except to share music with “Chinese eels”, Jang Keun Suk also went to Jeju Island to shoot the MV for the album. He also showed local Korean delicious food to “Chinese eels” Jang Keun Suk said: “Jeju Island is very beautiful. It feels like a foreign place. In the MV the vast grassland is a place in Jeju called “O-Leum” I hope everyone has the chance to go there to see. It is really great. I recommend black pork. It is so delicious. Everytime I go to Jeju I east it. When release his new album, Jang Keun Suk confessed to his fans:”I remember their (fans’) laugh and happiness. Now I want to laugh together with them.”