In hard times, BIG BROTHER is my reliable friend. I’ve never quarreled with him… 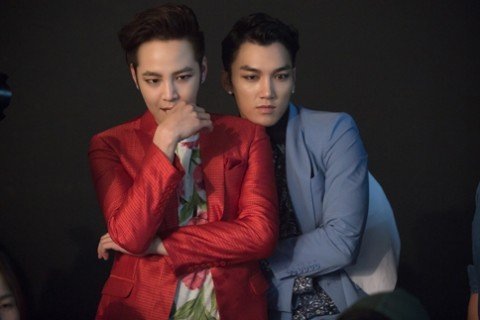 ―― What is your pleasure while recording? [Tonko/woman in 30’s]

JKS: The pleasure I feel in the process of recording that my first image after hearing the song is gradually changing into unexpected, rather much better output at the end is beyond words. When I receive a demo of a new tune for the first time, when I hear the tentative singing, when I record the song, when I receive the master CD after some arrangements, and when the CD is released, I think I feel different in each step. Needless to say, when I sing on a stage with fans, I feel different!

―― Did you have any disagreement with BIG BROTHER in the process of selecting songs? You two are very close, but do you quarrel with him? If so, what is the fight about? [Yu/woman in 20’s]

JKS: We respect each other’s opinion. But, before that, our tastes are really alike, so we’ve never had disagreements in choosing songs. I often find a song I think it’s great is also Kurt (BIG BROTHER)’s favorite. And in personal life as well, I think we’ve never fought. Kurt and I are considerate (Lol), so we’re getting along very well. Rather, in hard times, we can rely on each other. I don’t think we fight each other from now on.

―― How do you carry forward the process of making songs or concepts with BIG BROTHER? [Shunrai/woman in 40’s]

JKS: On a routine basis, we talk a lot. So we don’t discuss the concept formally. Rather when we’re chatting about music and life in personal time, we sometimes hit good ideas. Then, we decide to use this idea for our new album. Something like that.

―― What kind of advice you get from a producer, BIG BROTER on recording? [Yuribou/woman in 40’s]

JKS: He’s both a producer and a songwriter. So, first of all, I ask him to explain the concept of each song in detail. Then, while recording the song, I ask him to give some advices such as tone of voice and how to put feelings on it. And if I have an idea, I tell it to Kurt and we discuss each other and try to find common ground. Like this, we proceed with recording.