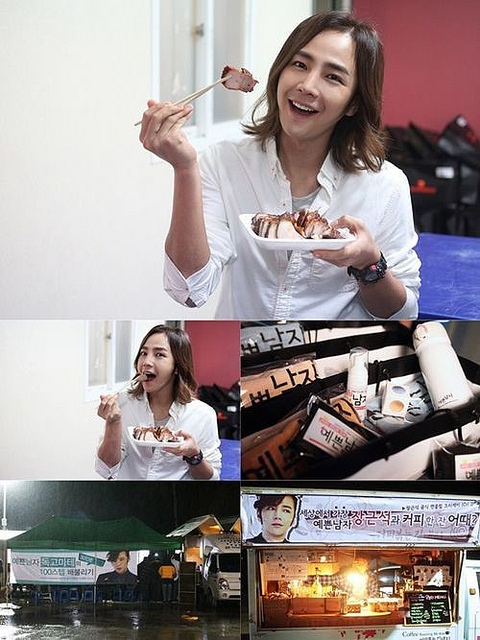 On 9th CRI J supported the ‘Pretty Boy’ team with catering event prepared on set. Especially the shooting set was located in a isolated place which made it hard to solve a meal. Fans who obtained this information prepared a food truck for the actors and staffs who are striving in such cold weather.

Menu was pork barbecue for 100 people. Fruits, deserts and coffee truck was also prepared creating a get-together atmosphere. Moreover, the duck vests, tumbler with warming function, toilet kit for the day long shoot all made staff and actors moved.

Jang Keun-suk’s fans are already ‘Mate-holic’ showing high expectations by comparing the character in the original cartoon with Jang Keun-suk. They even created a virtual poster with co-starring lead IU’s compositing images. They are showing infinite affection towards the drama ‘Pretty Boy’ by personally producing video clip for the drama.

Jang Keun-suk thanked, “I am enjoying filming as Dok GO-mate in ‘Pretty Boy’. Thank you for all your support even before the air. Please look forward to the first episode aired on 20th.”

Meanwhile, the highly anticipated ‘Pretty Boy’ will be based on popular cartoon written by Chun Gye-young with a sew of manias. Yoo Young-ah writer who wrote the blockbuster film ‘Miracle in Cell No. 7’ will be re-writing the story. So-called ‘flower boy creator’ Jung Jung-hwa director from ‘The Pretty Boy Next Door’, and ‘Flower Boy Ramen Shop’ will be showing off his sensual directing with strong visuals.