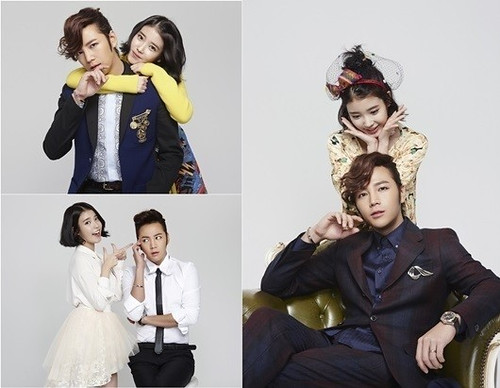 Jang Keun-suk and IU starring in ‘Pretty Boy’ as Dok Go-mate and Kim Bo-tong unveiled their couple pictorial in three different versions. This is raising high expectations before their soon to be aired first episode(20th).
Especially, Jang Keun-suk and IU, who nabbed the leading roles, perfectly match with the characters in the cartoon. Jang Keun-suk who can be described as good looking sculpture, flower boy, devilish boy and so on goes well with ‘Dok Go-mate’ and IU is also expected to show her distinguished tomboy act as Kim Bo-tong.
Also IU will be love sick over Jang Keun-suk with her hands cupping her face. Kim Bo-tong is captivated by Jang Keun-suk’s spell since junior high. She had a crush for more than 10 years, and is protective of Jang Keun-suk with single minded devotion.
However, Dok Go-mate is not even a bit interested in Kim Bo-tong. Whether Kim Bo-tong’s endless try to win his love will end with happily ever after is garnering attention.
Meanwhile, ‘Pretty Boy’ will center on most handsome devilish pretty boy Dok Go-mate striving to captivate 10 women in their super class with his charms. First episode will be aired on 20th after ‘Secret’.