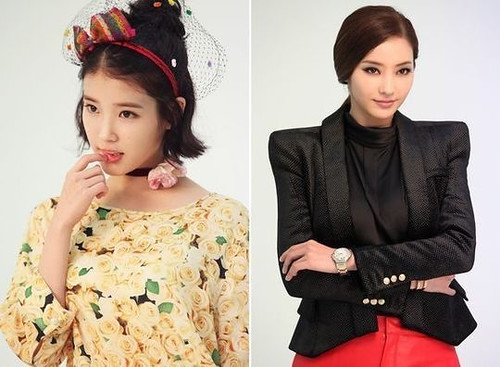 [OSEN=Yoon Ga-yi] No one can easily choose only one women of the two IU and Han Chae-young. The two with extremely different appeal will be starring in ‘Pretty Boy’ meeting Jang Keun-suk.

IU and Han Chae-young will be starring in KBS 2TV new Wed/Thur drama ‘Pretty Boy'(wirter Yoo Young-ah, director Lee Jae-sang, Jung Jung-hwa, producer Group Eight, Pineapple holdings) as Kim Bo-tong and Hong Yoo-ra. The two totally different yet equally deadly appeal is already garnering viewers’ attention.
Just as much as you can not imagine ‘Pretty Boy’ without Jang Jeun-suk, ther is no Kim Bo-tong if there is no IU. Kim Bo-tong is a daughter of rib restaurant who is naturally bright and energetic. As her name reflects, she is normal girl next door yet cute and adorable. IU makes us smile just by imagining her chasing after Dok Go-mate(Jang Keun-suk) who she loves.
As pretty as the ‘Pretty Boy’ Hong Yoo-ra(Han Chae-young) will be showing cold indifferent attitude. The return of goddess, Han Chae-young will be featuring Hong Yoo-ra passing down her tactics, leading Dok Go-mate with her deadly aura. She is ready to make a best diamond out of the best gemstone, also known as Dok Go-mate.
Cheerful girl Kim Bo-tong and femme fatale Hong Yoo-ra. Totally different two women are expected to make a great synergy along with Dok Go-mate. With deadly attractive episodes and characters, the drama ‘Pretty Boy’ is highly anticipated.
Meanwhile, ‘Pretty Boy’ is based on the ‘genius cartoonist’ Chun Kye-young’s cartoon already with so many manias. Yoo Young-ah writer who wrote ‘Miracle in Cell No.7’ loved by 12million audiences will be rewriting this work. Jung Jung-hwa director who is also known as ‘flower boy maker’ from ‘Flower Boy Next Door’, ‘Flower Boy Ramen Shop’ and so on will be directing. The first episode will be aired on 20th after ‘Secret’.
issue@osen.co.kr