Source: Naver Starcast
(Note: please click the above link to help Jang Keun Suk reach to the top search board on line. Thanks) 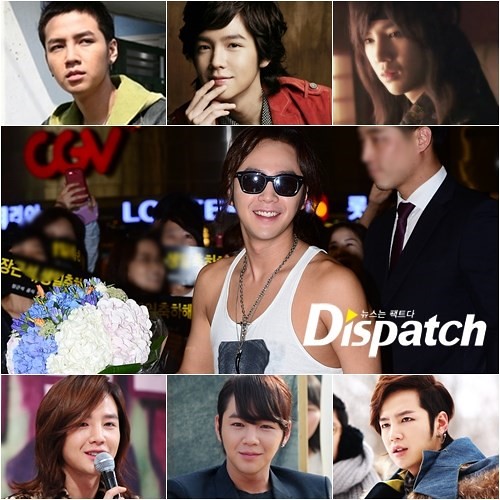 Let’s make a bold statement here: Jang Ken Suk’s fashion is overweening in the world and not submerged by the trends. Only he has 4-D fashion style which is outstanding from the surroundings, it becomes to his unique style. Is Jang Keun Suk being like “wow, cool” at beginning? Well, the beginning does says about the result. The turning point of Jang Keun Suk’s fashion is the change of his hair style: Before, short hair vs after, long hair. When he was only 20, 2007, Jang Keun Suk was kind of very manly man style, short hair with rider leather jacket. Typical macho style as he announced he became to an adult.
But that was only temporary, hair grows longer, his fashion started to evolve, suits with leather and fur neck collar as unusual combination, only Jang Keun Suk made such unforgettable impression, he was smart. Round neck knit shirt with bow tie, or short pants with leggings, these are styles that no one else can hold on to it. Even with classic dandy suits he wouldn’t just follow the trends. Pony tail, dark eyeliner became the highlights. Recent years, he likes this kind of grunge look, such as ripped leggings with shorts, casual clothes with gorgeous scarf. Jang Keun Suk’s fashion makes a fast evolution. He definitely made his own statement to the fashion world.

Years 2007-2009, “Grows differently”
Jang Keun Suk’s adolescence was similar to other kids. He played role in some sitcom as college student, naturally he prefers casual look. When he became to an adult, he started to put his own style to his fashion, he tried variety of styles and also started his own fashion world. Even the classic suits he would wear it differently, tight suits shows body line and with luxury fur scarf. In the year 2009 during “You’re Beautiful” time, he fells for roxy rock style, mix and match. He put dark eyeliner to give a more expressive deep look of his eyes. 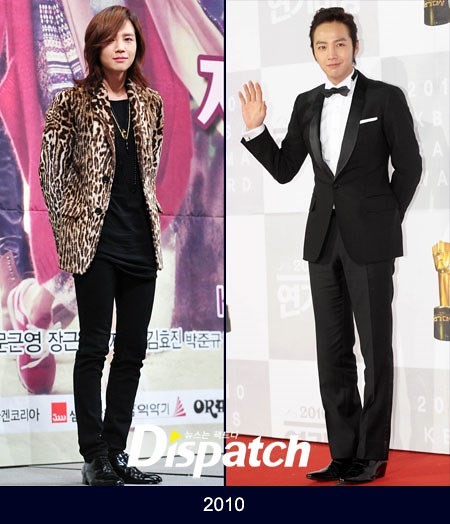 Year 2010, “Gentleman Geunjang”
Suits as man’s fashion synonymous, importance of wearing suits is it has to be fit, also different cuts will create different atmosphere. Jang Keun Suk knows that very well, he wore fit suits showed his long figure also his long hair came with all kinds style for different atmosphere which made people fall in love with. On screen, he was attracted by the rocker style as he played KBS “Mary Stayed All Night Out” as a rock musician in an indie band. His mix and match coming with layers of clothes with multiple necklaces in different length made him look splendid. 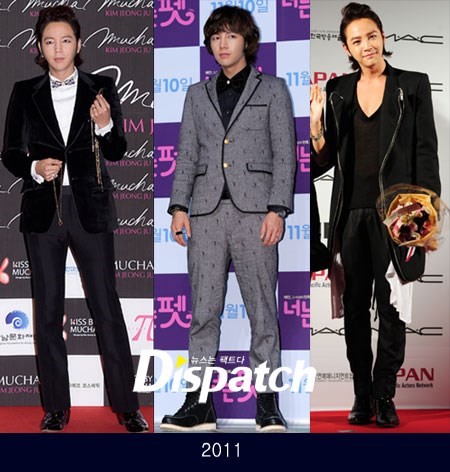 Year 2011 “A Prince from Manga World”
2011 is the year Jang Keun Suk era started. In Japan, he shot a CF dressed in all white clothes with his glowing white skin that had shaken the hearts of all women. In formal public events he was in classic style, his hair and make up made him a more matured handsome man, such as wearing the two button suits or double breasted blouser. Jang Keun Suk’s eyeliner time also started, before eyeliner was only for idols, but Jang Keun Suk put eyeliner make up in formal events. He used it to show his eye shapes and made eyes has strong expressions. So the eyeliner with classic suits became Jang Keun Suk’s unique style. 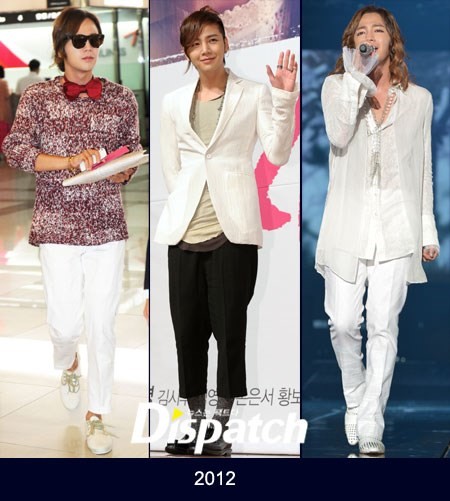 Year 2012 “Fun and Fashion”
With his fashion styling wit increasing, Jang Keun Suk started to have great ideas to stand out as fashion frontier. For example, he wore bow tie with round collar sweater, that’s very interesting and very personal style, the bow tie and sweater came with matching color which eliminated awkwardness. Baggy shorts with black leggings made him as a medieval prince. He looks sexy. On stage, he put on see through white shirt which made fans going crazy. The looming thin white shirt with same color white boots, the lights made his flesh radiating is breathtaking sexy, the wavy hair come down to shoulders made you think of teriwooseu (a long hair gorgeous man). 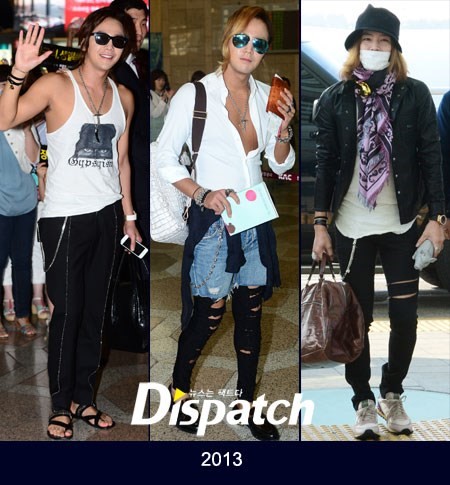 Year 2013 “The King of Airport Fashion”
If there is award for airport fashion Jang Keun Suk is the winner. Since he is focusing on overseas activities, compare to other stars, he is more coming back and forth between airports. His airport fashion is unique too. Leggings with ripped shorts; gorgeous scarf just casually put around neck; a style that no one else can hold on. His sexiness is also a point you can’t miss it. Unbutton shirt to the chest; expose his coopery skin and strong muscles with sleeveless shirt. Also his accessories are gorgeous too. Leather metal bracelets overlapped, with L’inoui designer backpack. Jang Keun Suk’s airport fashion has made a strong statement. His fashion style is unsurpassed “Big 5”. 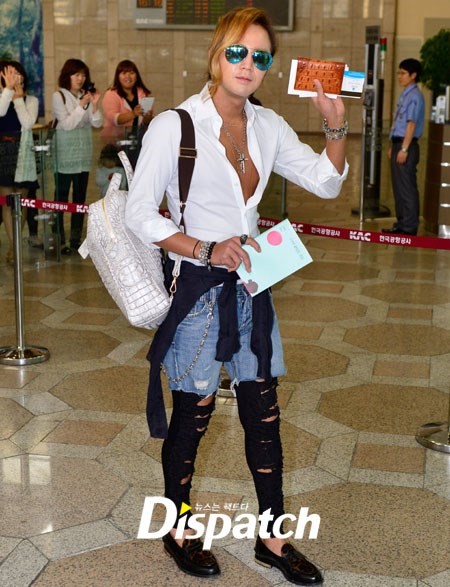 Jang Keun Suk is a fashion model. In May, he was leaving for Japan, white shirt with shorts, unique style, unbutton shirt to chest exposed his muscles. The layers of necklaces added splendor; the shorts with ripped leggings was an open eyes fashion statement. Passport in one hand, book in another hand showed another side of his charm. 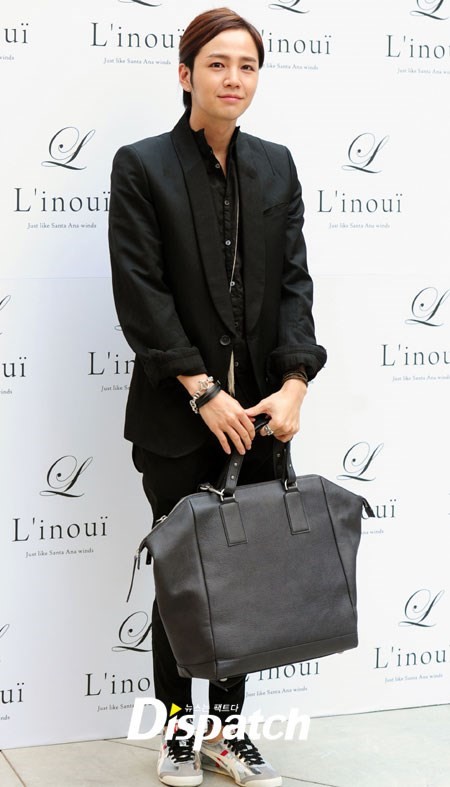 Gentleman style is working too. April 2012, he attend opening event for L’inoui Flagship Store, Jang Keun Suk’s all in black style showed his attractive handsomeness. Baggy pants with black tux jacket, same color shirt, big leather bag becomes the highlight. The casual style sneakers brought some vivid sense made the all in black not so bored. 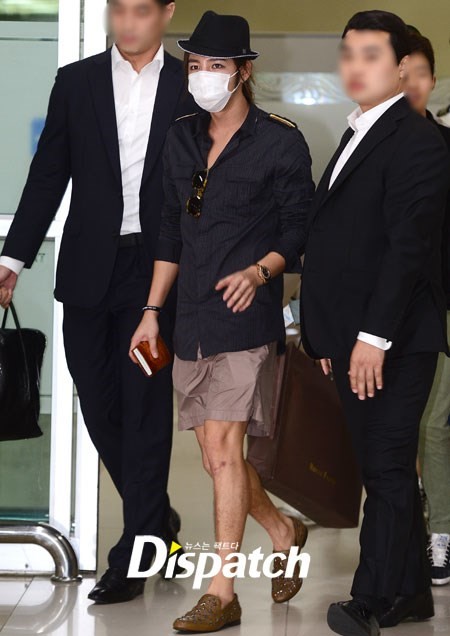 Jang Keun Suk’s magic which turned ordinary clothes to a eye catching fashion. Just past a few days at Gimpo Airport. He wore an off white shorts with black military shirt, but Jang Keun Suk didn’t just stopped here, added golden straps on the shoulder and wore a short edged fedora, with the mask, that was just a Michael Jackson look. Brown shoes with golden studs matched the clothes perfectly. 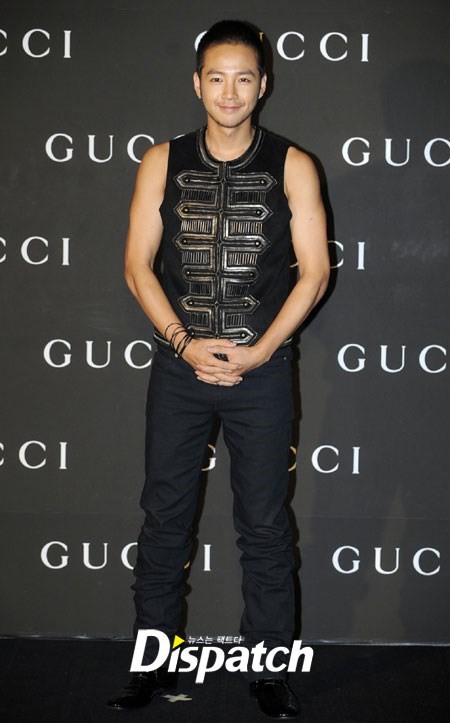 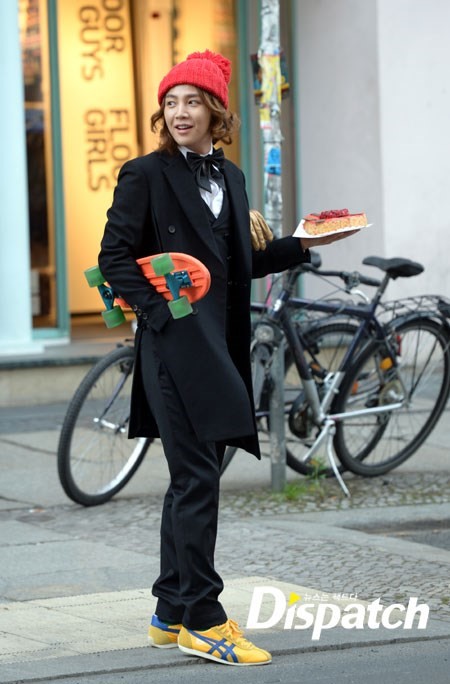 He can be also Prince Naughty, last autumn he went to Berlin for photo shoot. Jang Keun Suk became to a prince naughty, white shirt, black vest, long jacket, the big tow tie brought him as a fairy tale prince. The red knit beanie with bright yellow shoes made him stands out. Even just in a simple black look, Jang Keun Suk brings difference.