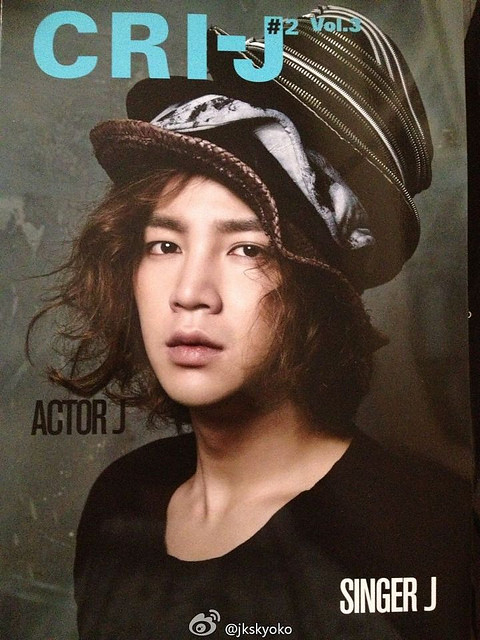 Q1: What promotes you when you’re acting?
A: Every work is about the same, first I need to think of the role I will play. If I can’t make sure what kind of emotion and acts I play for this role. I won’t stand in front of camera. In this case to project my role is the most important part to promote me. Of course, how the story develop is also important. If the role is a tree, then the story (plot) is the forest. If there is no good draft for the whole plot, there will be no perfect role. Another thing is the trustful relationship with the team at the work. And this can be as important as the role. Normally one drama needs shortest 3 to 4 months, longer as about 8 months. If there is no trust between the team I work with, there will be no good work comes out.

Q2: If we add a qualifier word in front of “actor Jang Keun Suk”, what kind of actor you would like to be?
A: An inestimable actor Jang Keun Suk, or an unpredictable actor Jang Keun Suk. Even I have played many different roles, earned love and respect, but the comment which makes me the happiest is that I was said my acting is unpredictable and I have a wide range of transformation. I feel so happy with this kind of critics. Of course I know I’m good at acting (laugh), but is different between I say it myself than I was recognized by others. So, there are lots of words you can add on, me… how I play the role that no one can predicate. I want to be an actor like that.

Q3: What can really motivate actor Jang Keun Suk?
A: Actors use sensibility to act; in this case, I don’t know when I want to act. I am doing the things I like, I don’t need a special motivation. For me, I’m a person that I feel like to act even during daily life. For example, recently, one day I was shooting a CF, the photographer aked me to express some sort of feeling, I did it as requested. Suddenly I got excited, I was thinking: I’m an actor! Then I am going crazy want to act. Sometimes I can get so enthusiasms, just because of a little tiny thing then think about acting. So I think in daily life I am an actor too.

Q4: During acting do you have the moment that you feel shameful? When?
A: When the actor lives in the role, is like the role character is just you, but if there is a moment that involved “Jang Keun Suk” himself. Such as “Jang Keun Suk”’s habit comes out, I will feel frustrated and shameful. When I see myself at that moment, I know my acting is only on the surface, I can’t forgive myself. I will scold myself to make myself on alert, I will continue to try to make improvement. This is my secret.

Q5: What would be the crisis for actor Jang Keun Suk?
A: The trust was broken with people I work with. When the person you trusted goes to the other side, this is the painful moment and this causes you lose concentration put you at risk.

Q6: What is the easiest feeling to express and which the most difficult, happy, angry, sad?
A: Every feeling is difficult, no matter what, at any circumstances, actor plays an emotion, This needs to be identical with the feeling inside you. That’s not an easy progress. When you watch a movie, if you see the actor’s real character of himself from the role he plays, then both the actor and audience are lost the game. So, happy, angry, sad there is no feeling that is easy to act.

Q7: In front of the camera, do you have any habit?
A: I heard there is people who loves (listenng to) music also there is people who had script in hand till the last minute, for me, I close my eyes, use 10 seconds to depict the role, then I will act the character out. One sentence: I’m a natural actor.

Q8: What help your acting in the daily life?
A: I’m a totally digital era, camera, email, cellphone, and internet. These are all fertilizers to my acting. For example, on twitter, when something happen, there are thousands people will tweet their thoughts and feedbacks, read those tweets, just make me realize that people are so different in many ways. So, the digital things and internet are very important to me. I can use my acting to express so many different thoughts. An actor’s job is to live in other people’s life. To live in other people’s life, you can’t ignore any little things in your daily life.

Q9: Which is the work even is not the best work in your life yet, but has very special meaning to you?
A: “Huang Jin Yi” the one who made Jang Keun Suk become an adult actor from a child star. And “You’re Beautiful/” which made me exceeded Korea, let the world know an actor named “Jang Keun Suk”. Every work is important, but there are some works I had regret and pain from it. These two works by some meaning are the good memories. Both I was very happy during shooting and also the works got highly praised and earned many love. To me these are the works of my fate.

Q10: The work which can see a growing Jang Keun Suk?
A: “Nonstop” time, I was still a kid (laugh). Even with the young age I can be forgiven, but what I was thinking? The next was “Huang Jin Yi “, I was trying to be an adult, so I did my best. In “You’re Beautiful” first time I was the oldest leading actor. So I was the captain, to lead and motivate the younger ones. I also thought of the seniors who took care of me. My last drama was “Love Rain”, this one has some painful memory, because it was a work that I was fighting with myself alone. It was very difficult and tiring, but afterwards I thought about it, this drama made me matured.

Q11: If you win award from both movie festival and music daesang (prize), the ceremonies are at the same time, which one you will choose to go?
A: No doubt, movie festival. After all, I’m an actor; I will be an actor as always. This doesn’t mean to give up music. To me as an actor: I will have works left after I die, this is very meaningful to me.

Q12: Through acting, what information and feeling Jang Keun Suk would like to convey?
A: I always don’t want to carry a heavy heart in front of camera. Because in that case, what you have are only motivation and reason for existence but no fact. I want myself to be an empty cell, just slide into the camera, but I will not lose my real heart and also the fact, I have to convey these out.

Q13: When you feel “my life is in action”?
A: When I look at myself in the mirror, I often hint myself: “Your acting is the best. You’re the best!” There are times I do feel this is acting actually. So at that moment I am thinking: I’m acting even I’m not in front of camera”. This is the moment that I feel my life is in action.

Q14: Script, PD, self satisfaction, which one is in your priority when you choose work?
A: Because acting is a comprehensive art, you can’t say which one is not important. Different actor also makes different choice. In my opinion the script and story is most important. Like sometimes from the first line I read I have the instinct feeling, I feel I would like to do this work. The other factors I will research later.

Q16: To Jang Keun Suk, “actor Jang Keun Suk” is…?
A: An endless war between the truths and lies; I use balance to measure myself on right or wrong. The result, I think “actor” to me is a mission, to leave good works as an actor is my mission.