In the article, the timelines are not mentioned are the times he was filming.

7am, the filming started again in the morning and remember Jang Keun Suk was filming till 4:20am earlier the day. He went back home took a shower, changed clothes, rushed back to the dressing room to do the hair.
His face and eyes were puffy. He took some meds. During make up time, he still didn’t forget to show off to the reporters the iPod cover that the fans made for him.

10am, They got to Hongdae, he dosed a little during waiting for the filming. He put a pill in the mouth and get ready to shoot.
During the time, he received the Japanese Text Book which he was featured in.

12pm Moon, Again waiting for the filming, he took a rest on the bed.

2pm afternoon, he was reading the script seriously. He changed the wardrobe again for shooting next scene. Keun Suk changed very fast. We asked him why, he said so that will short the time for staff to wait and also reduce their tiredness. “If I can do it fast, then it will help them.” But actually, his own tiredness was reaching the limit.

5pm, he said he needed to do photosynthesis so he went to balcony to drink water. During other people filming he waited in a tiny room.

7pm, for scene (Jun) argue with his mother, due to respect to senior actor, he wouldn’t allow any NG caused by him, so he maintain in the state of tense so it was stressful.

7:59pm, because of the fever he felt cold. He took a rest with a blanket on.

10pm, even he is sick, he still didn’t forget to make funny faces for the reporter. He always dedicates himself for others.

10:30pm He put hands on his face, he was not satisfied for his acting, so he requested to do it again. Even the director had given “OK” for it. But he still insisted to redo it. He is perfectionist.

11:57pm finished filming at Hongdae, he changed clothes again and it was midnight.
After change, he waited for senior actor, in order to keep himself awake, he started to do push up on bed.

1am, in the morning, for not to have any NG with senior actor, again he was reading script carefully.

2am, he was hungry and ate a sandwich, he said he needed to get fresh air and to digest. He did some exercises, he even used “yelling” try to get rid of the tiredness.

3:13am, he posed gesture “come to me for a hug” to help to light up the atmosphere on site by making jokes.

3:15am continue filming, due to the sickness, he had to redo the make up on his face. There was no time even for his skin to take a break.

3:45am, dress smartly, the handsome Jang Keun Suk came back to the white garden to continue filming till 4:43am……
We were so touched by his acting spirit.

and after 4 hours, the filming started again!!! 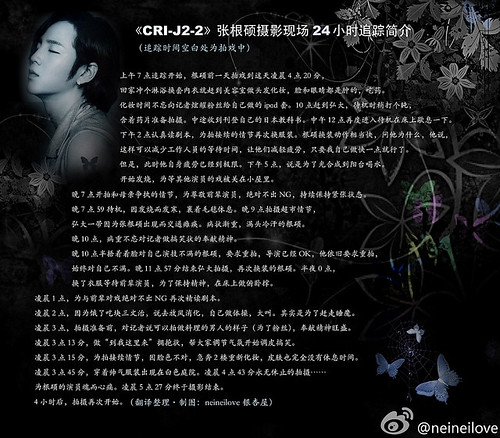